An Expression of Cultural Identity

Green the homeland, and distant the mists: Classical traditional Persian music, as played by the Dastan ensemble, is a living legacy for Iranians across the world. By Alessandro Topa 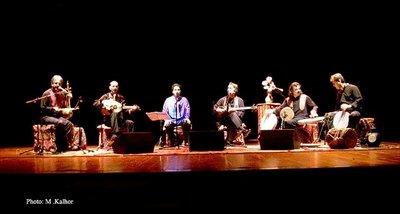 "An unsettling ramble through landscapes of the soul and motif-rich glades of Persian musical art": the six-members of the Dastan Ensemble are guardians of Persian classical tradition

​​ There is no record of what Safi al-Din played to Hulagu Khan in the late winter of 1258 in Baghdad, as the Mongol ruler's troops laid waste to the cultural metropolis of the Islamic world. The learned Oud virtuoso appears to have approved of the choice of repertoire though, as the musician survived both the mass murder of his fellow citizens as well as the concert unscathed.

Did the great musical theorist choose the tonality and structure of his recital with careful consideration and foresight? Quite possibly on the basis of his 17-interval scale, a system outlined in his book Kitab al-Adwar (The Book of Musical Modes)? Or did the refiner of the theories of philosophers al-Farabi and Ibn Sina rely entirely on the expertise that he had gained as practitioner at the court of the last Abbasid Caliph, confident in the knowledge that a free improvisation would, with the right dose of anticipation, lend meaning and definition to the slightest hint of emotion issued by the grandson of Genghis Khan? 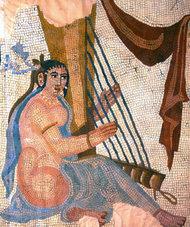 ​​ It is not known for sure whether Safi al-Din really was able to win the favour of the founder of the Ilkhanid dynasty solely through the legendary magical power of his playing. What we do know is that Safi was soon allowed to play music and conduct research at the court of Hulagu; and in addition, we know that to this day, Persian musical art still owes its characteristic internal tension and sophisticated otherworldliness to a blend of improvisational hermeneutics as it was conducted at the time, with a meticulously ritualised self-consumption.

In this regard, the singer Homajoun Shajerian asks: "Where should I fly to, if I free myself from the shackles of your love?", in the beguiling piece "Bou-ye Eshgh" (Scent of Love), a musical setting in free metre of a poem by the Shiraz poet Sa'adi (1184–1291).

The Dastan Ensemble is renowned for its unswerving commitment to the upkeep of the legacy of Persian musical art at the highest level – a reputation confirmed here from the overture "Asheghaneh" (Lovesong), a composition that makes full use of the palette of tricks and techniques available, right through the continuously intoxicating process of musical concentration that the six-member ensemble brought to a close with "Bou-ye Eshgh".

In meditations such as the fervent "Eshgh-e Pak" (Pure Love), Persian musical art reveals itself to be an integral part of Islamic mysticism, and therefore as a spiritual practice, in which the practice of music making is perceived as a way of opening up to God.

This is one of the paradoxes of Iranian history: A traditional artistic genre that could only be honoured and passed down by courtly cultural circles following the spread of Islam more than a millennium ago, actually experienced a mass-media-supported renaissance after of all things, the anti-monarchist Revolution of 1979.

​​ Thanks to the popularisation of this elite art form, even in the age of the hip hop maestri (ostad-ha), singers such as Hossein Alizadeh, Mohamed-Reza Shajarian or Shahram Nazeri are still viewed and admired as shining lights in the galaxy of a musical tradition in which Iranians both at home and abroad find an expression of cultural identity.

Untutored ears, on the other hand, are touched by a musical language made up of a tonal matter that appears to elongate, swell and compress itself in such a baffling manner temporally, as the ensemble creating it does spatially. In this respect the live recording of this rich album, that wants to be enjoyed and listened to as poetry, is convincing not lastly owing to a tonal finesse that has an equilibrium and impression all of its own.

It is evident from its family of musical instruments that the performance practice of Iranian musical art was historically restricted to private rooms, smaller halls and gardens. Classical instruments such as the zither-like Santur or the Nay flute appear to have been fashioned for the purpose of entering into clandestine musical conversations, in order to be able to indulge the forbidden passions of the soul. The same also goes for the lute-like instruments the Tar, the Setar and the Barbat (a predecessor of the Arab Oud), which colour the gently oscillating sound of the Dastan Ensemble. 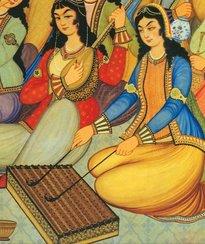 ​​ The omnipresent frame drum, Daff, unique to Sufi rituals can, thanks to metal rings and a decent-sized diameter, really draw attention to itself, particularly when several instruments play together in frenzied unison. Two of the most distinguished Iranian percussionists, from both a tonal and a technical perspective, play in the Dastan Ensemble in the form of Behnam Samani and the restless Pejman Hadadi.

With dammam, tombak and other drums they weave a vibrant ribbon of rhythms, impulses, ornamentation and melodic micro-motifs that has no difficulty in encircling even the most complex of pieces such as the 20-minute "Khorshid-e Arezoo" ("Sun of Hope").

The performance is a ramble through landscapes of the soul and motif-rich glades of Persian musical art, a process that is at times uplifting, and at times unsettling due to the difficult, mountainous terrain vanquished by the Dastan Ensemble in its two one-hour suites in the mode of Dashti and Isfahan.

It is a ramble during which the aesthetic discipline repeatedly captivates, is maintained in constant flow with bursting emotional intensity, filtered and placed back as an empty promise of happiness on the scales of life.

Lebanese Composer Marcel Khalife
Music as a Political Message
For decades, Lebanese composer and singer-songwriter Marcel Khalife has played a leading role in shaping Arabic musical culture. His latest concert in Germany was entitled "A Tribute to Gaza". By Martina Sabra

END_OF_DOCUMENT_TOKEN_TO_BE_REPLACED
Social media
and networks
Subscribe to our
newsletter