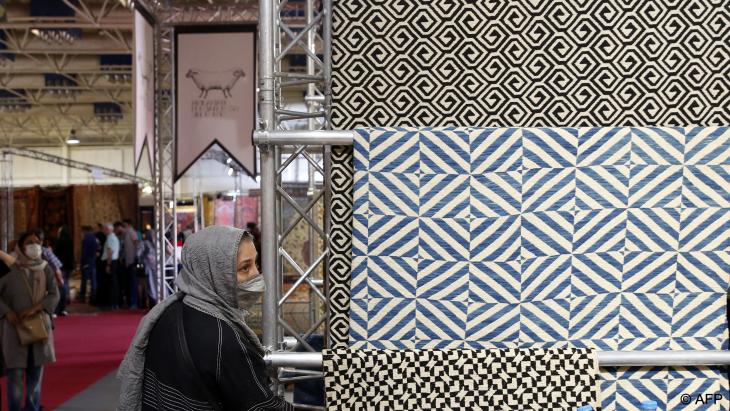 Striking geometric shapes that recall 20th-century abstract art are not what you would expect to see adorning a handmade Iranian rug. But changing tastes and increased competition from Asia have forced some in the trade to redesign and resize a tradition dating back more than 2,000 years.

"A revolution is underway," said Ahad Azimzadeh, 65, who calls himself "the biggest exporter of Persian carpets in the world".

Rugs traditionally woven in the Islamic Republic are known for dense, curving floral designs in rich colours. Their beauty and quality have long been recognised worldwide, yet sales have collapsed over the past 30 years.

"In 1994 the value of Iranian carpets sold abroad reached $1.7 billion and represented 40 percent of our non-petroleum exports," revealed Ahmad Karimi, chief of the Handmade Carpet Manufacturers' and Exporters' Union. By 2019-20 that figure had shrunk to $70 million, he said.

By another measure, in 2000 Iran represented 32 percent of global handmade carpet exports. This fell to 7.9 percent by 2019 as exports from China and India rose, Karimi said.

There was "an impact" from international sanctions that targeted Iran over its nuclear programme, human rights and other issues, but he said other factors are more to blame. 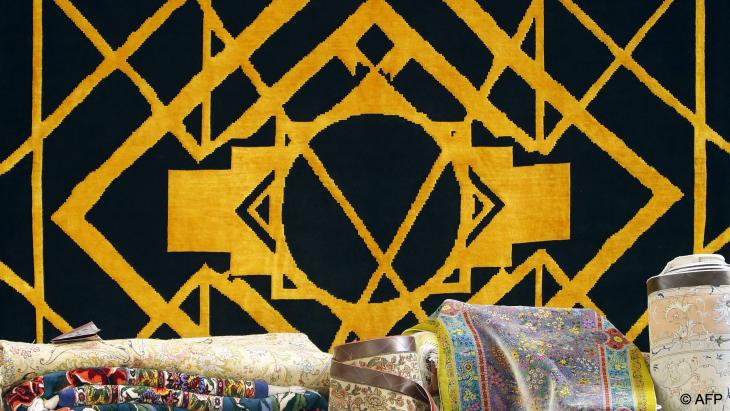 "The patterns of Iranian carpets are ancient, but today there is a strong demand for contemporary styles. They're more suitable for a modern house," says carpet exporter Azimzadeh, a big talker who started small – as a seven-year-old weaver

"Especially by the big diversity of carpets on the market and the change in the mentality and tastes of the new generations," Karimi said.

Azimzadeh, the carpet exporter, said "the future is with modern handmade rugs". He spoke at last week's handmade carpet exhibition in Tehran. The annual event, suspended for two years because of the coronavirus pandemic, features about 400 exhibitors from across Iran.

"The patterns of Iranian carpets are ancient, but today there is a strong demand for contemporary styles. They're more suitable for a modern house," said Azimzadeh, a big talker who started small – as a seven-year-old weaver. By 14, he had graduated to the commercial side of the trade.

Among the new styles on display at the exhibition which ended on Sunday: a rug featuring small squares of hypnotic diagonal blue and white lines.

Another depicts diamond and other geometric patterns in gold silk on a black background. One wool rug looks as if an ink roller has left splashes of gold on it.

"The colours are clear and the sizes smaller," which is what modern tastes demand, Azimzadeh said.

As an extreme, but less typical example of this "revolution", Azimzadeh stands in front of a woven rug three metres square ) in size. It depicts global personalities including actor Charlie Chaplin, the physicist Albert Einstein and Soviet dictator Joseph Stalin. 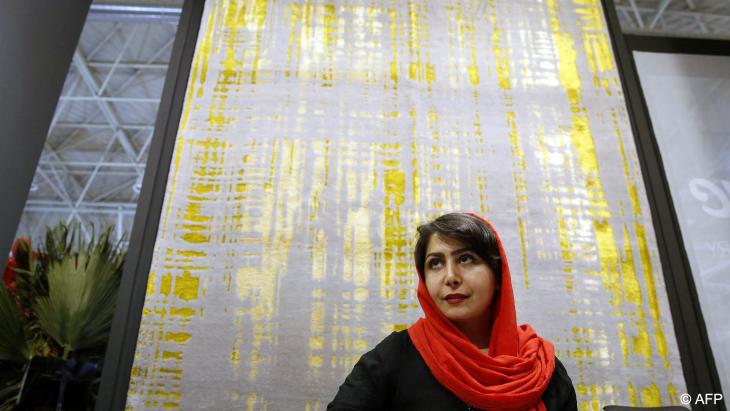 "A year ago we began to make carpets in modern designs, but they represent only five percent of our production and I don't think we will go beyond that," said Mehdi Jamshidi, director of sales for Iran Carpet company. "Modern carpets will never replace the traditional ones, which are deep-rooted in our culture and regions"

From art to doormat

For now, modern designs are still a minority at his stand in the exhibition, but the traditional stock will be gradually withdrawn, he said. "Next year, 70 percent of the rugs on display will be modern," Azimzadeh predicts.

Karimi, of the exporters' union, regrets that Iranian carpets are nowadays seen as "a consumer good to put in front of the door, whereas in the past it was an investment. "It's lost its status as an object of art."

Another trader, Abbas Arsin, was perhaps ahead of his time when he created what he calls the "transitional carpet" 25 years ago. He took traditional patterns and made the bright colours fade by rubbing them and leaving them in the sun.

"My father and my older brother didn't understand why I wore myself out making the old rugs fade," said Arsin, 40, the third generation of his family in the business. But when he exhibited his first works and customers came, his family encouraged him to "only do that", he recalls with a smile. 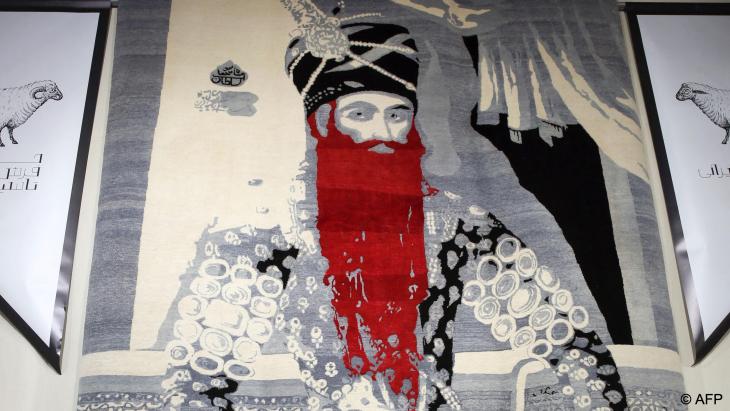 "The future is with modern handmade rugs": last week's handmade carpet exhibition in Tehran, usually held annually, was suspended for two years because of the coronavirus pandemic. It featured some 400 exhibitors from across Iran

Arsin said India, Pakistan, Turkey and China overtook Iran in the global market because "we Iranians had fewer relations with the rest of the world. We didn't see the changes that were happening."

Even now, not everyone is convinced.

"A year ago we began to make carpets in modern designs, but they represent only five percent of our production and I don't think we will go beyond that," said Mehdi Jamshidi, director of sales for Iran Carpet company. "Modern carpets will never replace the traditional ones, which are deep-rooted in our culture and regions."

Hamid Sayahfar, a dealer who spends his time between Tehran and Toronto, said the new geometric styles might be suitable for an office, but not at home. It's just a fashion, he said, "and like every fashion it will disappear."    (AFP)

When is it and when is it not acceptable to display a political banner at the World Cup in Qatar? The answer seems to depend largely on the political message, with fans ... END_OF_DOCUMENT_TOKEN_TO_BE_REPLACED

The Kurds are under attack from two sides: from Turkey, and from Iran. The situation in their territories in northern Iraq is becoming increasingly desperate. Birgit Svensson ... END_OF_DOCUMENT_TOKEN_TO_BE_REPLACED

Iranians do not want an Islam that interferes. They are fed up with a system that manipulates people with simple promises of salvation and anti-Western propaganda. Islamic ... END_OF_DOCUMENT_TOKEN_TO_BE_REPLACED

"The Voice of Dust and Ash" draws us into the life and times of Iranian maestro Mohammad Reza Shajarian with passion and joy, focusing on the man who stood, and still stands, for ... END_OF_DOCUMENT_TOKEN_TO_BE_REPLACED

November 2022 sees the Arab world firmly in the spotlight with the COP27 in Egypt and the FIFA World Cup in Qatar. Public trust in MENA governments is weak, thanks to their ... END_OF_DOCUMENT_TOKEN_TO_BE_REPLACED

In Iran, two famous actresses, Hengameh Ghaziani and Katayoun Riahi, were arrested recently. These days anyone who shows solidarity with the protesters is a target to be silenced ... END_OF_DOCUMENT_TOKEN_TO_BE_REPLACED
Date:
Mail:
Send via mail

END_OF_DOCUMENT_TOKEN_TO_BE_REPLACED
Social media
and networks
Subscribe to our
newsletter