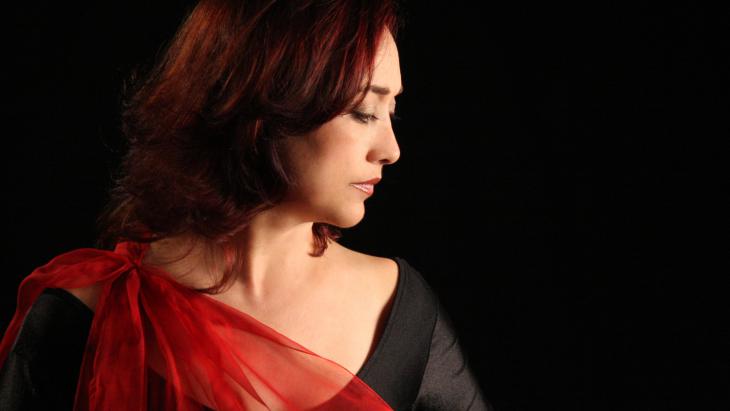 Since the 1990s, the exiled Iranian singer Mamak Khadem has been combining Persian classical music with world music. For her new album, "The Road," she has discovered unusual Eastern European soundscapes. Marian Brehmer talked to the musician and listened to her latest CD

It is highly probable that any fan of Persian fusion music has already heard the voice of Mamak Khadem. In the early 1990s, she was the lead singer in the first band that introduced Iranian classical music to Western ears in a form that was easily accessible. Based in America, the group "Axiom of Choice" and its fusion of ethno-pop became known far beyond its initial public of Iranian exiles in Los Angeles to make its mark in the larger world music scene.

Even when only a relative few know her name, Mamak Khadem has long since ensured her place among Iranian exile singers on the basis of her three solo albums. Her music consists of both Iranian and Western elements, although other sounds from different musical traditions have increasingly found their way into the mix.

Khadem recorded the album "Jostejoo" (The Search), released in 2009, in collaboration with Greek musicians and was inspired by musical encounters with the country. The combination is quite catchy – the track "Baz Amadam" (I have returned), named after a poem by Rumi, blends a clarinet and oud in a light-footed duet, while Rumi′s verses dance back and forth between the notes.

Mamak Khadem was born in Tehran and sang as a young girl with a children′s choir on state radio. At the insistence of her parents, Khadem began university studies in the USA just two years before the 1979 Islamic Revolution. Following the political upheavals in her homeland, Khadem decided to remain in America. Her passion for classical Iranian song grew with her life in exile. "My relationship to Iran has always remained intense. It took 38 years before I could finally refer to myself as an Iranian-American," says Khadem.

During her summer vacations in Iran, Khadem learned the classical repertoire of Persian music from renowned vocal coaches. As a result, her Persian vocal technique has always maintained a constant quality despite her explorations of new musical paths. "Traditional Persian music is complicated and elaborate. It has a massive repertoire, which enables musicians to establish links with music from other regions of the world," says Khadem.

For her new album, "The Road", Mamak Khadem travelled through the Balkans and allowed herself to be inspired by regional melodies. Serbian, Macedonian and Bulgarian sounds have left their mark on the album – so much so that alongside Persian and the Iranian regional languages of Kurdish, Azeri and Gilaki, Mamak Kahdem even sings in these languages.

Breaking out of old patterns

In keeping with this spirit, the melody of the track "A Thousand Strings" comes from a popular Serbian folk melody. Propelled by percussion and plucked guitar, the piece strides ahead with a leisurely 7/8 beat. Mamak Khadem sings the first lines of the track in Serbian and then shifts into a poem from Rumi′s work Diwan-e Shams. "First you have to come up with such an idea," says one Serbian YouTube follower, commenting on the music video accompanying the song.

Among the music videos for the album is also a clip in which Mamak Khadem leaps over cliffs and stands on a horse-drawn carriage traversing the countryside to the almost cliched sounds of a Balkan brass band. The woman from Los Angeles evidently has a weakness for kitschy Eastern European rustic romanticism. "Over the past few years, I have felt a strong urge to break out of my old patterns and experience life from a new perspective," says Khadem.

Her travels through the Balkans left her particularly impressed by the trans-border nature of the music there. "Although the geographical borders in this region are constantly redrawn, musicians here have always gone beyond these borders and allowed themselves to be inspired by those on the other side." For Khadem, it was perfectly natural to embellish the melodies she discovered with lyrics from her own culture. This unique mixture of Eastern European folklore and Iranian poetry alone make the songs on "The Road" worth listening to.

Going beyond the traditional

Khadem regrets the absence of such an openness towards the new among the generation of Iranian musicians with whom she grew up. Like many proponents of fusion music, Khadem criticises the traditional constraints placed upon Persian classical music. "Only now is the new generation slowly succeeding in going beyond traditional music. Nonetheless, it is still a work in progress," describes Khadem.

Khadem is making her own contribution to this effort. She is currently planning a concert with a Macedonian ensemble that she met during her work on "The Road". However, since the election protests of 2009, she no longer visits Iran. Her long life in exile has not only influenced her music, but also her perspective on her homeland.

Home
Print
Newsletter
More on this topic
The Iranian singer Mahsa Vahdat: "Every place can be my stage"Film review: "No Land's Song": One woman's quest to make Iranian women's voices heardInterview with the Iranian Virtuoso Kayhan Kalhor: For the love of improvisation
Related Topics
Dialogue of Cultures | Intercultural Dialogue, Iranian music, Musical worlds, Women in the Islamic world
All Topics

"The Voice of Dust and Ash" draws us into the life and times of Iranian maestro Mohammad Reza Shajarian with passion and joy, focusing on the man who stood, and still stands, for ... END_OF_DOCUMENT_TOKEN_TO_BE_REPLACED

In Iran, two famous actresses, Hengameh Ghaziani and Katayoun Riahi, were arrested recently. These days anyone who shows solidarity with the protesters is a target to be silenced ... END_OF_DOCUMENT_TOKEN_TO_BE_REPLACED

November 2022 sees the Arab world firmly in the spotlight with the COP27 in Egypt and the FIFA World Cup in Qatar. Public trust in MENA governments is weak, thanks to their ... END_OF_DOCUMENT_TOKEN_TO_BE_REPLACED

With the current leadership of Iran quick to lay the blame for the Iran protests on Israel, the chances of harmonious relations between the two countries still seems remote. Yet, ... END_OF_DOCUMENT_TOKEN_TO_BE_REPLACED

Lamya Kaddor, MP for Germany’s Green Party, visited Qatar with a group of parliamentarians. In interview with Claudia Mende, she advocates a differentiated picture and urges that ... END_OF_DOCUMENT_TOKEN_TO_BE_REPLACED
Author:
Marian Brehmer
Date:
Mail:
Send via mail

END_OF_DOCUMENT_TOKEN_TO_BE_REPLACED
Social media
and networks
Subscribe to our
newsletter