Perspectives on Sharia
On the Plurality of Islamic Law

There are very few comprehensive studies of Sharia around. German lawyer and Islamic Studies expert Mathias Rohe has just written one where, among other things, he argues that the historical and global perspective has always produced a multiplicity of interpretations. Martina Sabra has been reading it

Against the idea of admitting Sharia laws into the areas of European civil and private law is: Professor of Law and and Islamic Studies expert Mathias Rohe

​​ For most people in the West, the terms "Islamic Law" and "Sharia" are likely to raise only images of medieval-seeming and draconian corporal punishment, of persecution of dissenters and the oppression of girls and women.

The fact that a global civilisation was founded on an Islamic law that has historically been characterised by plurality of opinion and by interaction with non-religious value systems, on the other hand, hardly seems to merit a mention.

Not surprising then that there is a formidable array of forces currently intent on restoring Islamic law's prestige. They range from extremist and reactionary movements such as the Taliban, to the Islamist parties and the liberal religious feminists who scrutinise Islamic law in their search for ways to help improve the legal status of women.

All of this tends to obscure the picture. "Muslims, too, often use the term Sharia rather imprecisely," notes Mathias Rohe, lawyer and Islamic studies expert from Erlangen. "The narrow, traditional interpretation of Sharia equates it with corporal punishment and discrimination against women. The other, very broadly defined conception, sees Sharia as referring to the basic religious precepts of Islam – prayer, fasting, pilgrimage."

Neither of these truly hits the mark, according to Rohe. "The historical dimension of Sharia needs to be taken into account if one really wants to understand Islamic law."

What is Sharia? What does fatwa mean? Can there ever be gender equality in Islam? Mathias Rohe sets about answering these and other questions by looking closely at the sources of Islamic law, the Koran and the Sunna, the corpus of surviving information on the Prophet Muhammad, which Muslims see as providing guidance on a properly religious and ethical lifestyle.

Rohe describes the emergence of Islamic law with its different regional schools. He also describes in detail the most important elements of family, international, criminal and commercial law, whilst taking the differences between Sunni, Shiite and other groups into consideration.

​​ How much significance does Islamic law currently have for the day-to-day lives of Muslims? The answer to this question depends on the region one is talking about. In Saudi Arabia, for example, the Koran still officially serves as the constitution, the idea of a secular jurisdiction only gradually gaining a foothold. In Turkey, on the other hand, state and religion have been radically separate entities since the abolition of the caliphate in 1924.

These extremes excepted, the majority of Islamic countries have opted for a middle way in the course of decolonisation.

Whilst the young nation states have generally oriented themselves on European examples with regard to criminal and commercial law, countries such as Egypt, Morocco, Malaysia and India have maintained religious regulation in civil status law.

This means, for example, that, just as in Europe, a crime such as burglary will carry a prison sentence while in the case of personal matters – marriage, divorce, inheritance law, it is the respective religious communities that have the say. For Muslims this means marrying, divorcing or inheriting must be done in accordance with the prevailing interpretation of Islamic law.

Denominational "division of the law"

This denominational division of the law was no great problem as long as only a few Muslims were emigrating to non-Muslim countries. With increasing migration, however, more and more Muslims are now being faced with the difficulty not only of adjusting to a foreign society and culture but also to a new legal system.

"In Germany the problem is not quite so pressing because the majority of Muslim immigrants here are from Turkey where there is no religious family law," explains Mathias Rohe.

It's a different story in France, the UK, or the Netherlands. "Many of the immigrants in these countries are from places where civil status law is religiously regulated, places such as Morocco, Algeria, Pakistan or India, for example," Rohe explains.

It is the national origins of the migrant communities in Great Britain, France and the Netherlands, Rohe believes, that provide the main reason why the topic of official recognition for Sharia is a more regular topic of discussion in these countries than it is in Germany.

Sharia versus civil and private law

It is a point upon which the law professor has strong views. The idea of admitting Sharia laws into the areas of European civil and private law is something to which he is very much opposed. 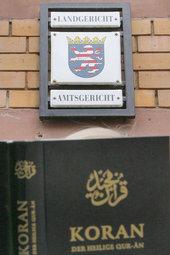 "Islamic theologians and religious teachers have an important role to play when it comes to the compatibility of Islamic religious identity with the principles of the democratic rule of law," says Rohe.

​​ "I would very much warn against turning back a history of legal development that began in Europe more than a thousand years ago and is something really to be valued," says Rohe.

"Until something over a hundred years ago we still had special rights for religious minorities in Europe. But that was discrimination not acceptance – as if to say: 'You Jews and Muslims have not yet reached the level of civilisation that we Christians have!' Muslims who are calling for the introduction of Sharia need to realise that the freedom to vote that exists in Germany is a great privilege, and that there are opportunities to influence things within the scope of the existing legal framework, and in a way that is compatible with a stricter religious understanding."

Mathias Rohe believes that Islamic theology has a duty. "Islamic theologians and religious teachers have an important role to play when it comes to the compatibility of Islamic religious identity with the principles of the democratic rule of law," he says.

Even if questions concerning the application of Islamic law in Germany do not appear to be quite so urgently in need of addressing here as they are in some other European countries, the increasing presence of Islam in public life will mean that here, too, the challenges posed by the past and present of Islamic law cannot be avoided forever.

Mathias Rohe's book, packed with information and forthright opinions, is therefore a timely publication and one that has something to say to both non-Muslims and Muslims in Germany.

Sharia Law in Europe
"The Idea of Plural Jurisdiction Is Highly Problematic"
The Archbishop of Canterbury has caused quite a stir with his suggestion to integrate the Sharia into a European legal context. In fact, the Sharia is already being applied in several Western countries. Loay Mudhoon spoke with the legal and Sharia expert, Mathias Rohe, about the cases in which it does or does not make sense

Muslims in Germany
Seeking Clarity on Religious Law
Imams have a strong influence on Muslims living in Germany. One of their tasks is the issuing of fatwas - religious opinions on Islamic law which can serve as behavioral guidelines for Muslims in specific situations. Heiner Kiesel reports

END_OF_DOCUMENT_TOKEN_TO_BE_REPLACED
Social media
and networks
Subscribe to our
newsletter