Philosophy in Iran
Between Critical Rationalism and Eastern Wisdom

Philosophical thought in Iran has long been influenced by direct dialogue with western philosophers. But the Iranians are also attempting to maintain the heritage of their own intellectual tradition. Alessandro Topa took a trip to the Iranian Institute of Philosophy 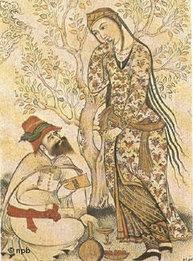 A philosophical genius little-known in Europe: the doctor, mathematician, philosopher and poet Ibn Sina. A medieval portrayal shows him receiving knowledge from a muse

​​Iranian philosophy is often regarded in terms of western categories – including inside Iran itself. The contemporary discourse for example is conceived as one between anti-modernist Heideggerians and secular Popperians. Teheran's renowned Iranian Institute of Philosophy, however, does not think much of fashions, but holds classical modes of philosophising in great esteem.

Corbin is one of the few western names still found on a Teheran street sign since the Islamic Revolution. It leads straight to the entrance to the Iranian Institute of Philosophy (IRIP), where the great French philosopher Henry Corbin (1903–1978) taught. The gates open up to a park dotted with birch trees and fountains, housing two nineteenth-century villas. This paradise of Old Persian taste is no doubt the perfect refuge for the intellect.

Under the reformist President Khatami, philosophical legations often arrived in Teheran to discuss democracy and human rights. The fact that such events gave the fundamentalist establishment an opportunity to present itself in the flattering light of cultivated open-mindedness, while newspapers were banned, dissidents interned and writers murdered, produced a screech of feedback in a "dialogue of civilisations" that barely reflected its own prerequisites.

In terms of his discussion partners, Jürgen Habermas at least diagnosed an "asymmetry of communication relations" in 2002, inasmuch as the Iranians appeared to devote significantly more interest to the discourses of western philosophers than these had for their Iranian counterparts. 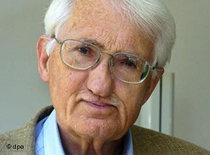 Subtle critique: Jürgen Habermas has long been popular with Iranian philosophy and social science students, even before his visit to Teheran in 2002

​​Six years on, nothing has changed in this respect: whereas every large bookshop in Teheran has a philosophy section containing classics from Aristotle to Wittgenstein, most Europeans are more likely to assume Ibn Sina is an Al Qaeda man than recognise the name of the philosophical genius. What has changed for the worse is the philosophers' interest in travel to Iran.

"An incredibly stimulating diversity of opinion!"

This is partly down to President Ahmadinejad's unspeakable utterances on the subject of Israel. And secondly, the internment of the Iranian philosopher and intercultural bridge-builder Ramin Jahanbegloo in Teheran's Evin Prison in 2006 fulfilled its purpose: philosophical dialogue has now bowed out for good, surrendering the stage to dubious Holocaust conferences.

In the corridors of IRIP, only posters recall the days when luminaries of the likes of Otfried Höffe and Paul Guyer came to Teheran to discuss Kant's transcendental philosophy with their Iranian colleagues. Yet the institute's director, Dr. Gholam-Reza Aavani, does not consider there have been fundamental changes.

"We can still maintain an intensive dialogue with European and American universities," says Aavani, a student of Henry Corbin who seems visibly more comfortable talking about his studies at the American University of Beirut in the 1960s. "Islamic philosophers taught there side by side with Wittgensteinians and convinced existentialists. There were even Platonists like the brilliant Whitehead student Richard Scott. An incredibly stimulating diversity of opinion!" 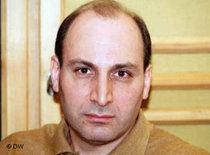 Loss of one of the most significant representatives of intellectual discourse and dialogue: the philosophy scholar Ramin Jahanbegloo left Iran after his release from prison in 2006

​​The director will not confirm that diversity of opinion is acutely at risk at Iranian universities, as reports of primarily politically motivated firings of liberal professors in the autumn of 2006 suggested.

"For philosophy," Aavani adds with great diplomacy, rejecting the role of a critical intellectual, "nothing is more damaging than politics." Yet he is concerned about pluralism, for other reasons. "Of the 15 doctoral candidates at the institute, 11 are working on western philosophy. Only four of them are writing PhDs on Islamic philosophy. Interest in our tradition, which led to the foundation of many philosophical seminars after the revolution, is continually decreasing."

In Beirut, Gholam-Reza Aavani also studied under Hossein Nasr, who founded the forerunner to the IRIP in 1974: the Royal Iranian Academy of Philosophy. Its royal tasks were the maintenance of Iran's (pre-)Islamic philosophical heritage and the exploration of the ideas of western and eastern civilisations.

Nasr brought Henry Corbin and Toshihiko Izutsu to Teheran, two of the leading experts in the field of Islamic philosophy, one of them also a brilliant representative of Christian thought and the other of Buddhism.

"When I wrote my doctorate on the influence of neo-Platonism on Islamic philosophy in the 1970s, I profited from the dialogue with these great scholars on a daily basis," Aavani says of the years prior to 1979, when the Teheran institute was highly respected around the world.

In the delivery room of global thought

The philosophers around Corbin were united by their interest in putting an end to a historical prejudice against Arab philosophy, which led Hegel for example to the verdict that it was only of interest with regard to the "propagation of philosophy" but otherwise "did not further the principle of thought". 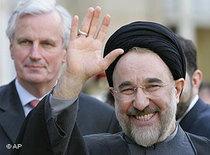 ​​According to this view, Islamic philosophy is merely significant to the extent that it continued the intellectual heritage of the Greeks, which was then to find its true heir in the Christian scholars in Paris, Bologna and Oxford. The great Aristotle commentator Averroes (1126–1198), in this view, was the final progeny of the Islamic tradition, which then sank back exhausted in the delivery room of global thought.

Corbin's work, in contrast, was to make clear that the philosophical Eros in Islam by no means died out after the thirteenth century. In fact, the Iranian mystic al-Surhawardi (1155–1191) launched a development that lasted several centuries with his teachings on Illumination, which Corbin explored in the second volume of the Bibliothèque Iranienne – a period in which Greek, Old Iranian and Islamic moments were united into an autonomous philosophy (hekmat).

The fermentation of metaphysical questioning – Surhawardi writes of "eternal sourdough" – reached a peak in the thinking of Molla Sadras (1572–1641), the great philosopher of the Safavid Empire.

As a representative of a philosophical tradition almost unknown in the West, Aavani is convinced that the historically evolved system of hekmat certainly provides the conceptual toolbox to work on the issues of today – such as a philosophical explanation of democracy. "Although hekmat is a school of thought in which faith and religion play the central role in the universal economy of salvation, it is certain that man, formed in the image of his creator, is essentially one thing: free."

END_OF_DOCUMENT_TOKEN_TO_BE_REPLACED
Social media
and networks
Subscribe to our
newsletter