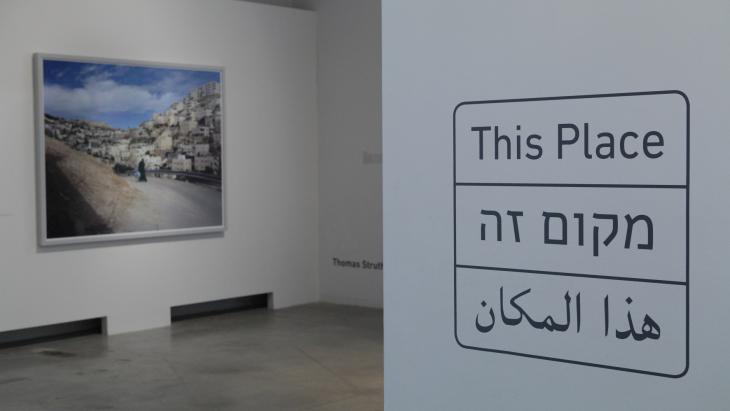 Twelve international photographers set out to explore Israel and the West Bank through the lenses of their cameras for the photo project "This Place". The aim was to see Israel as a metaphor and to go beyond the stereotypes. According to Felix Koltermann, however, the project makes no more than a marginal contribution to a more profound engagement with the reality of the region

The fruits of 12 international photographers setting off to discover Israel and the West Bank are currently on display in an exhibition at the Dox Center for Contemporary Art in Prague. The photographers who took part in the project "This Place" didn't go to the region on their own initiative; they were invited to take part by French photographer Frederic Brenner, who began working on the realisation of his project in 2007. Brenner made a name for himself documenting Jewish life in many parts of the world. The photographers in question include illustrious and well-known personalities such as Jeff Wall, Joseph Koudelka, Thomas Struth and Stephen Shore.

Brenner's motivation was to see Israel as a metaphor and to look for photographic projects whose scope went beyond myths and stereotypes. Between 2009 and 2014, the photographers involved spent time on residencies in the region, sometimes for several months at a time. The result was 12 very different pieces of work; different not only in terms of content but also in terms of their photographic implementation.

Each of the 12 photographers brought their own photographic visual imagery and approach with which they went in search of motifs, stories and images. The exhibition in Prague is the first time that an overview of their combined work has been available to the public. However, each presentation shows only a small selection of the extensive work done by the individual photographer.

The Gaza Strip was omitted from the project, and the West Bank was added only at the express wish of the photographers, many of whom made it a condition of their participation. 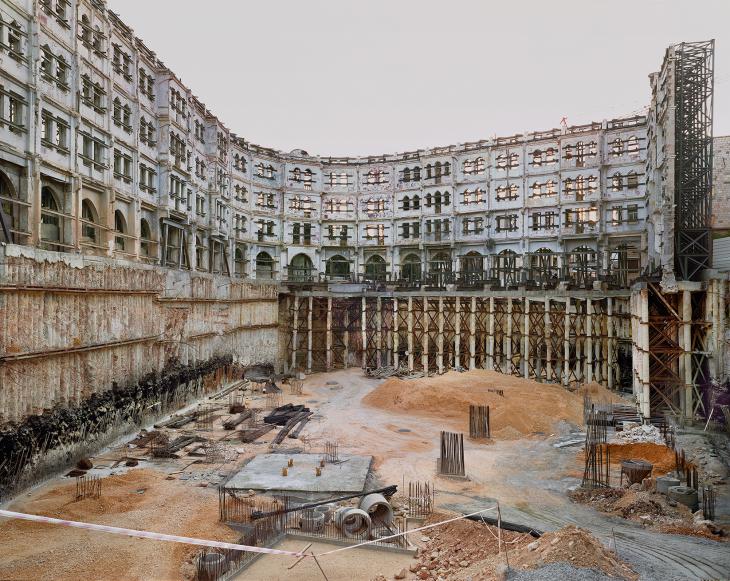 "Palace Hotel, 2009" by Frederic Brenner, on display at the "This Place" exhibition. Brenner, who made a name for himself documenting Jewish life in many parts of the world, invited 12 international photographers to discover Israel and the West Bank with their cameras for this project, which was launched in 2007

One common theme running through the photographer's individual projects is an engagement with the landscape. The German artist Thomas Struth, the legendary American photographer Stephen Shore and the Korean artist Jungjin Lee all found their own forms of expression for this. The old Czech master Joseph Koudelka depicts it most radically, with sombre black-and-white photographs of the wall.

Portraits are another important common theme. Rosalind Salomon travelled across Israel and the West Bank by bus in search of fleeting encounters, while Frederic Brenner staged elaborate family portraits. Nick Waplington started a long-term project in which he observed Jewish settlers, while the young Czech filmmaker Martin Kollar presents the region as an accumulation of film sets.

Apart from an extremely short, very general introductory text and brief introductions to the individual projects, the exhibition contains hardly any information that would allow the visitor to contextualise the projects. The works of Wendy Ewald and Fazal Sheikh are the exception. There is a short text about each of the 14 groups with which Ewald held photography workshops. Here we learn about the situation of Palestinians in East Jerusalem, or where Druze live in Israel, which gives us an idea of the significance of the photos.

Fazal Sheikh's installation with 48 aerial photos of the Negev desert acquires suitable profundity thanks to a small booklet laid out in the exhibition. The fact that there are no other texts is presumably because the aim of the exhibition was to organise an art project about Israel and the West Bank and to circumnavigate the political pitfalls that can go with such an endeavour. However, this means that a great deal of potential is lost – all the more so given that the curator, Charlotte Cotton, is driven by the desire to give the observer "a deeper identification with the reality of this country". 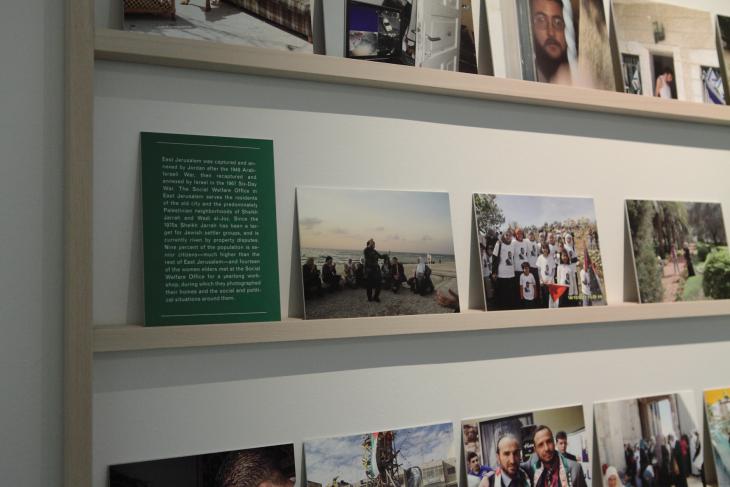 According to Felix Koltermann, the short texts relating to the works of Wendy Ewald (pictured here) and Fazal Sheikh are the only ones in the exhibition to give visitors the opportunity to contextualise the photos they are seeing and understand their significance

Reducing the complexity and looking behind the facade are aspects that can only be successful if one not only produces images for this but also provides the observer with the knowledge required to decipher them, to read the hidden signs and recognise their significance. Otherwise the images remain a beautiful and aesthetically interesting but ultimately impenetrable facade. Even in an art project, what's wrong with calling things by name, identifying problems and explaining the background? Of course the Israeli-Palestinian conflict also takes place at a linguistic level, but terms like "Palestinian", "occupied territories" and "occupation" are established, and their usage can be justified.

The project team have made the mistake of thinking that adopting a position and calling things by name would mean falling into the friend/enemy schemata and following a monolithic vision. This is absolutely not the case, and no one knows this better than the many local and international photographers who have worked in the region for many years. The use of vague and unclear terminology, on the other hand, denotes proximity to the dominant Israeli conflict narrative.

Brenner expresses his conviction that "only through the eyes of great artists can we begin to understand Israel's complexity – its history, its geography and its daily life – as well as the resonance this has for people around the world". This is an implicit denial of the ability of local, especially Palestinian, photographers and artists to make valid statements in their own name about the region and to present these in an artistic form.

Well-known foreign artists can certainly make a contribution to understanding, but local artists and photographers, writers and journalists can do this just as well. Based on what they experience in their everyday lives, as well as on analysis of their own photographic practice and the history of photography in the region, many of them decide to adopt a critical stance and express it in an aesthetically demanding way. It is not per se an advantage either to be from the region or to be a visitor; it all depends on the working method and the strategy followed. 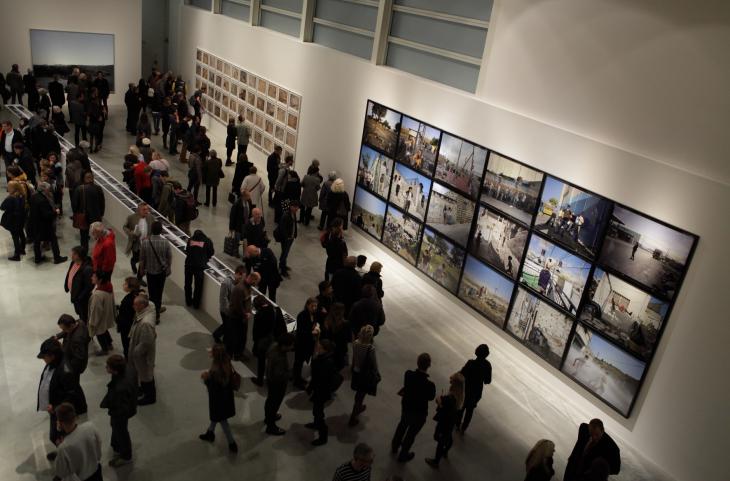 View of the exhibition "This Place" at the Dox Center for Contemporary Art in Prague. Visitors can see photos by 12 photographers including Joseph Koudelka, Gilles Peress, Fazal Sheikh und Jeff Wall

Furthermore, a project that ran for almost seven years and cost almost six million dollars must also ask itself what power structures it is reproducing. With the exception of Lee and Sheikh, who lend the whole thing an intercultural touch, the project was implemented almost entirely by white Europeans and Americans. As a consequence, it somehow falls into the tradition of orientalist "Holy Land photography".

Current power structures that are found in photojournalism of the region and are especially apparent in the asymmetry between Palestinian and international photo reporters are also reproduced here. Those with the interpretative power, social capital and better contacts with the media and art markets are usually photographers and artists socialised according to Western conventions. Israeli photographers also belong to this group. Whether consciously or unconsciously, "This Place" reproduces these structures.

As a project aimed at the art market, "This Place" works superbly well. Adorned with an intellectualised philosophical superstructure, it is well suited to entertaining the educated middle-class. But the project makes only a peripheral contribution to a more profound engagement with the reality of "This Place".

The exhibition can be seen at the Dox Center for Contemporary Art in Prague until 3 March. It will then be shown at the Tel Aviv Museum of Modern Art and subsequently in the USA.

In Nathan Englander's novel "kaddish.com", a Jewish man is plagued by feelings of guilt and regret for disregarding the rules of the Kaddish (prayer for the dead) for his deceased ... END_OF_DOCUMENT_TOKEN_TO_BE_REPLACED

Russia is leaving no stone unturned in its attempts to make the Islamic Republic an ally in the war against Ukraine. Fortunately for Vladimir Putin, the mullahs in Tehran are ... END_OF_DOCUMENT_TOKEN_TO_BE_REPLACED

It is possible to write about the Holocaust and the crimes of colonial powers without downplaying anything. In her latest book, Charlotte Wiedemann focuses on the numerous blind ... END_OF_DOCUMENT_TOKEN_TO_BE_REPLACED

The Palestinian militant organisation Hamas, with Hezbollah's help, is building up a military presence in Lebanon, the ultimate consequences of which could be devastating, writes ... END_OF_DOCUMENT_TOKEN_TO_BE_REPLACED

With his fist bump greeting for a man he previously called a pariah, US President Biden has paved the way for Saudi Crown Prince Mohammed bin Salman's return to the international ... END_OF_DOCUMENT_TOKEN_TO_BE_REPLACED

Asked about the Shoah, Palestinians often bring up the Nakba, the displacement of Palestinians associated with the founding of the state of Israel. An Israeli Holocaust researcher ... END_OF_DOCUMENT_TOKEN_TO_BE_REPLACED
Author:
Felix Koltermann
Date:
Mail:
Send via mail

END_OF_DOCUMENT_TOKEN_TO_BE_REPLACED
Social media
and networks
Subscribe to our
newsletter