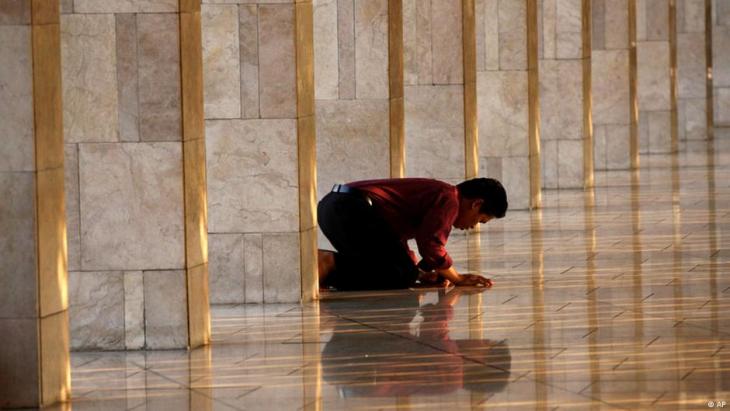 Every night at 3:00 am, Rina is jolted awake by blaring speakers so loud she has developed an anxiety disorder: she can't sleep, she's too nauseous to eat - but she is also too scared to complain because doing so could see her jailed or attacked.

The noisy neighbour is the local mosque in her Jakarta suburb, and the clamorous sound is the call to prayer.

Both are so sacred in Indonesia, the world's biggest Muslim majority nation, that criticising them can lead to accusations of blasphemy, a crime punishable by as much as five years imprisonment.

"None dares to complain about it here," says Rina, a 31-year-old Muslim woman who is using a pseudonym in case of reprisals. "The loudspeakers are not only used for call to prayer but they also use it to wake people up 30-40 minutes before the morning prayer time," she tells journalists, adding that she is at breaking point after enduring the noise for six months.

Online complaints about noisy loudspeakers are increasing, but the lack of anonymity and fear of a backlash means there are no reliable official statistics. Aware of the growing discord, the Indonesian Mosque Council (IMC) is deploying teams to tackle mosque sound systems around the nation - but it's a delicate subject.

The Southeast Asian archipelago was once hailed for its religious tolerance with people of many faiths living alongside each other, but there are concerns its moderate brand of Islam is coming under threat from hardliners.

In 2018, a Buddhist woman was jailed after saying the call to prayer "hurt my ears", and earlier this year actress and influencer Zaskia Mecca, who has 19 million followers on Instagram, was condemned online after the hijab-wearing Muslim criticised mosque speaker volume during the holy month of Ramadan.

Around the Islamic world, the broadcast of the call to prayer and sermons via external loudspeakers are regarded as a key pillar of Muslim identity, but the issue is deeply divisive.
In June, authorities in Saudi Arabia ordered mosques to limit the volume of their external loudspeakers to one-third of their maximum capacity, citing concerns over noise pollution. There was an immediate backlash.

There are around 750,000 mosques across Indonesia - a medium sized venue could have at least a dozen external loudspeakers that blare the call to prayer five times a day. For Rina the nightly interruptions are impacting her health.

"I started having insomnia, and I was diagnosed with anxiety disorders after always being woken up. Now I am trying to make myself as tired as possible, so I can sleep through the noise," she explains.

Indonesian Mosque Council chairman Jusuf Kalla estimates around half the nation's mosques have poor acoustics, which exacerbates the noise problem. "There is a tendency to set the volume high so that the call to prayer can be heard by as many worshippers as possible from far away because they consider it a symbol of greatness in Islam," explained the IMC's acoustics programme coordinator Azis Muslim.

The organisation is battling to minimise community tension with a free door-to-door service to repair sound systems and offer training - some 7,000 technicians work on the project and have already fixed the audio at more than 70,000 mosques.

Although the programme is not mandatory, Jakarta's Al-Ihkwan mosque chairman Ahmad Taufik used it because he wanted to ensure social harmony.

"The sound is softer now. That way it will not disturb people in the neighbourhood, not to mention we have a hospital behind the mosque," he says.

But it has long been a contentious issue. Then vice president Boediono, who like many Indonesians uses one name, faced condemnation when he suggested the volume of the call to prayer be restricted in 2012.

Five years ago, hundreds of protesters torched nearly a dozen Buddhist temples in North Sumatra's Tanjung Balai after Meiliana, who is of Chinese descent and also goes by one name, criticised the volume of the call to prayer. The mother-of-four was jailed for 18 months in 2018.

More recently in May this year, angry mobs marched to a luxury housing complex near Jakarta after a resident asked for the local mosque's loudspeakers be turned away from his house. The police and military were forced to intervene, and the man publicly apologised via social media to quell the outrage.

Indonesians often react angrily to such complaints because they wrongly believe the loudspeaker announcement to be a religious requirement rather than a cultural expression, said Ali Munhanif from Syarif Hidayatullah State Islamic University in Jakarta.

"This is what happens when the advance of technology meets excessive religious expression. If the call to prayer is left unmanaged or unregulated then it could disturb social harmony," he added.
Rina is adamant she will not make a complaint.

"The (jailed mother) case shows us that reporting it will not bring anything but disaster," she insists, adding: "I have no choice but to live with it. Or sell my house."    (AFP)

END_OF_DOCUMENT_TOKEN_TO_BE_REPLACED
Social media
and networks
Subscribe to our
newsletter