Chaste and in Conformity with Islam

Veiled police officers in the service of Hamas patrol the Gaza Strip. Above all, they provide for chaste contact with other women in conformity with Islam. Ruth Kinet reports

​​ Naremeen Odwan commands 200 women police officers. For the past year and a half, she has headed the Women's Division of the Hamas Police Force in the Gaza Strip. The 30-year-old mother of five holds the rank of major. Policewomen are represented in all departments and police stations in Gaza, says Odwan, and are involved in the fight against narcotics, criminal investigations, and upholding traffic regulations. In addition to heading the division, Odwan organizes her officers' teamwork, duty roster, vacation times, and further training.

Strict separation of the sexes

The policewomen in the Gaza Strip wear a light grey ankle-length cape, a dark grey veil that leaves the face free, and white gloves. In principle, the services of these female custodians of the law are required whenever contact with women is necessary, in all matter ranging from family disputes to the fight against the drug trade. There is a strict separation of the sexes within the Hamas police. Whenever women police are required to accompany their male colleagues on an assignment, both teams drive in different vehicles. 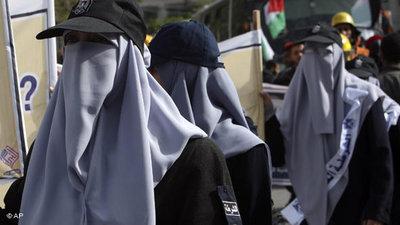 ​​ The basic precondition to be accepted for a job as a policewomen is a spotless moral biography, explains Police Chief Naremeen Odwan. "Whoever applies for a job here has to be physically fit and possess a solid character. We research the biographies of candidates and if a negative point is discovered, then we don't accept the applicant." Moral and security concerns are also important. The women can't be spies nor can they have had even a single contact with an Israeli, she says.

In it for the money?

Abad fulfilled the necessary requirements for the job. She is 25 and is actually a trained engineer. Now she holds an administrative position with the Hamas police. Abad avoids eye contact with her chief as she speaks. She says she wants to be "a constructive element in society." Her statements sound prepared and Abad does not show any noticeable enthusiasm for her work. 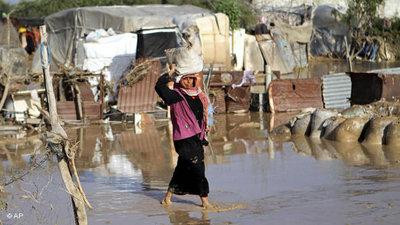 The great poverty among Palestinians in the Gaza Strip: in view of a lack of alternatives, a permanent position with the Hamas police force and a monthly pay seems quite attractive

​​ Unemployment, however, stands at 39 percent in the Gaza Strip. Some 70 percent of the region's 1.5 million inhabitants have to make due on less than the equivalent of 80 euro cents a day. By comparison, a permanent position with the Hamas police force and a monthly pay of 220 euros seems quite attractive.

Police Chief Naremeen Odwan reacts coolly. She has a shy smile, almost girlish. But she is not a major with the Hamas police by chance. Odwan is convinced of the importance and purpose of her work. When asked if she found it strange to handle weapons as part of her job, her face lights up. "No," she answers, "absolutely not. I was actually quite happy about it. It had long been one of my dreams!" And suddenly her mobile phone rings – with the sound of a machine gun.

Nicolas Wadimoff's Film on Gaza: "Aisheen"
Life After Destruction
The documentary film "Aisheen – Still Alive In Gaza" scooped the ecumenical jury prize at this year's Berlinale. The film, which was produced one month after the end of the war in Gaza, does not focus on the destruction itself, but about the life that follows it. Igal Avidan spoke to the Swiss filmmaker Nicolas Wadimoff

Rebuilding Gaza
Poor Prospects for the Economy
The international community plans to donate over five billion euro for rebuilding the Gaza Strip. But there are huge hurdles in the way of the repair work. Bettina Marx reports

END_OF_DOCUMENT_TOKEN_TO_BE_REPLACED
Social media
and networks
Subscribe to our
newsletter