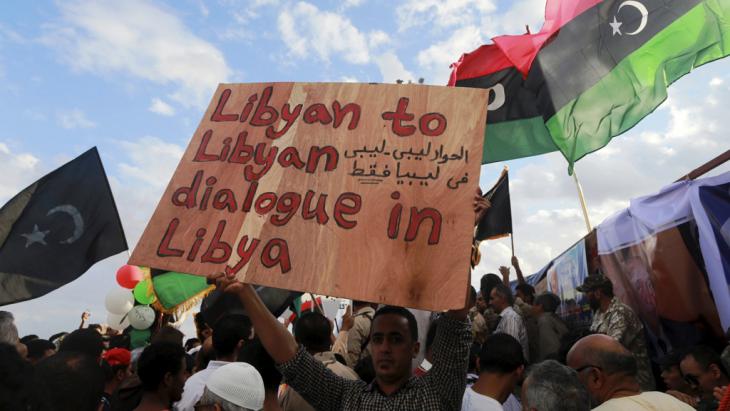 Four months after the signing of one of the UN-backed peace agreements between the conflict parties in Libya, the unity government may have arrived in the capital, but it is still uncertain when it will be able to fully assume power. Valerie Stocker reports from Tripoli

"The people want the unity government!" cry the demonstrators in unison on Martyrs' Square in Tripoli on a Friday afternoon in April. There aren't that many of them, but their presence is significant, because a quiet power struggle is currently being played out in the Libyan capital.

"We're not supporting [Prime Minister] Fayez Sarraj because we think he′s particularly good," says one of the demonstrators. "But the fact that he's at the helm of the unity government as a newcomer to politics and he has the support of the West, is reason enough."

Since the outbreak of the civil war two years ago, most Libyans have drastically scaled down their political expectations. The passionate speeches on revolution and democracy delivered by quarrelling politicians now have little resonance, as the average citizen has more important things on his mind.

Coupled with the worrying security situation, an acute liquidity crisis also prevails in combination with the decline of the national currency. For this reason, many are keen to try their luck abroad, as long as they can still afford to. But while Libyans could travel relatively easily in the past, civil war and the refugee crisis now mean Schengen visas are becoming harder to come by.

Other regional nations such as Egypt and Turkey have also introduced stringent admission restrictions. The national border with Tunisia is often closed and in any case, the only direct border crossing close to Tripoli is shut due to a local conflict. At the moment, being in Libya feels reminiscent of the isolation of the 1990s, when international sanctions were imposed against the Gaddafi regime and the population barely had any contact with the outside world. 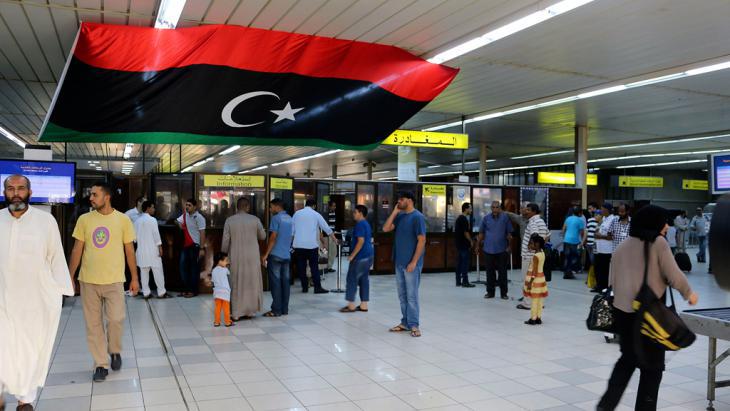 Cut off from the outside world: ″at the moment, being in Libya feels reminiscent of the isolation of the 1990s, when international sanctions were imposed against the Gaddafi regime and the population barely had any contact with the outside world. Any flights that there are from Tripoli depart from the military airport at Mitiga, which has replaced the international airport in the capital destroyed in fighting,″ writes Stocker

Any flights that there are from Tripoli depart from the military airport at Mitiga, which has replaced the international airport in the capital destroyed in fighting in 2014. According to the flight path, the pilots have to make a stop in eastern Libya, to enable passengers to get the correct entry stamp, as the interim government in the eastern Libyan city of Bayda regards itself as the only legitimate state power.

Also located in the east (Tobruk), the parliament – the council of representatives elected in 2014 that, according to the peace agreement signed last December should remain in office – has convened dozens of sessions to vote on the future unity government. But all attempts to hold an election have so far ended in chaos.

Whether through blockades of the debating chamber, the disappearance of attendance lists, verbal and physical attacks on parliamentarians or through the absence of the parliamentary speaker: fearing they will lose, opponents of the unity government are using every means at their disposal to prevent the poll. At least, this is what supporters of the unity government are claiming. The latter have issued two declarations since February asserting that their votes should be recognised as officially binding. They claim to be in the majority.

Although such a move would contravene the original agreement, which stipulates that a vote must be held, even the UN now appears to be willing to overlook this legal detail. "It may not be a formal decision, but it is good enough and an indication that the government can begin its work," explained Martin Kobler, the German UN Special Envoy to Libya. 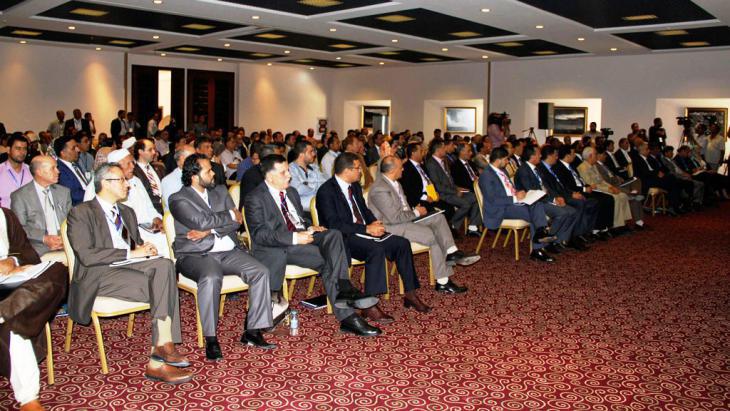 Persistent differences, heightened mistrust: due to differences of opinion deemed to be too great, parliament in Libya recently had to indefinitely postpone the planned vote of confidence on the new unity government. The vote on the UN-supported unity government is to take pace in the eastern city of Tobruk, the seat of the internationally recognised parliament. The newly-formed unity government under the leadership of Fayez Sarraj is part of one of the UN-sponsored agreements that also foresees a new constitution as well as parliamentary elections

More than 1,000 kilometres to the west of Tobruk, in Tripoli, there are quite different hurdles to overcome. What is known as the Presidential Council – the core of the unity government appointed as part of the agreement and made up of nine members – has taken up temporary residence at the naval port, hardly daring to move any closer to the city centre. "The situation in Tripoli is likely to remain difficult as the city is controlled by militia," Kobler also admits. "The regular security forces are rudimentary."

But the council's move to the city is still being viewed as an achievement. On the morning of 30 March, Prime Minister Fayez Sarraj and his colleagues arrived in Tripoli by frigate from Tunisia. A few days previously, the opposition "National Salvation government" had called upon all security forces and "revolutionaries" to arm themselves against the "mandate government imposed by the West" and closed air space to prevent their arrival.

But the Presidential Council succeeded in winning the support of the strongest of the armed groups in the Tripoli area, thereby deposing the "National Salvation government". On the other hand, its leader Khalifa Ghwell has since retracted his capitulation, saying he has no intention of giving way – as a result, the Council′s success could be short-lived.

The position of the new incumbent remains precarious, as a visit to the high-security naval base shows. "There are opposition voices, but most Libyans want unity," assures Mussa al-Koni, one of Sarraj's five deputy prime ministers. "The vote in the council of representatives is just a pro forma matter," he says. "Any objection should have been raised within ten days." 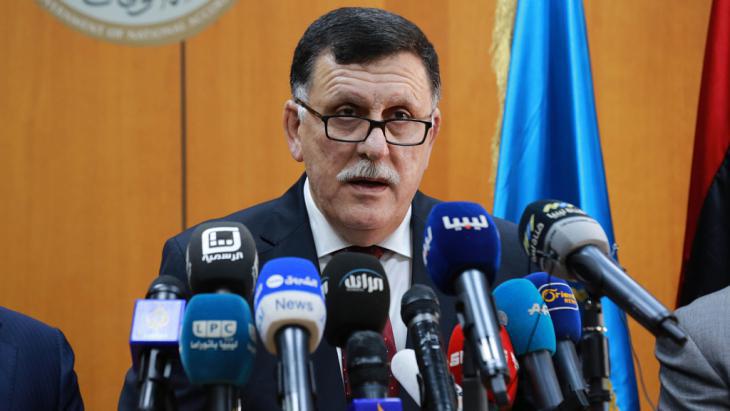 Powerless prime minister? In late March, Libya's Prime Minister Fayez Sarraj and his Presidential Council assumed office in Tripoli with the support of the UN. But the Tobruk parliament has so far not approved his cabinet list, and his ministers still have no real control over the ministries

Nothing else would appear to stand in the way of the takeover. The government is actively taking over ministries and attempting to gain control of the financial crisis in co-operation with the central bank. But the process is an arduous one and the authorities are not in agreement over whose orders now apply.

The challenge of "Islamic State"

The port site is guarded by the "Central Security Force" – a Salafist organisation that has discarded its original role as self-appointed morality and anti-drug police force and declared war on "Islamic State" (IS), which has been extending its influence in Libya since early 2015. "We need the help of all armed groups to fight IS," says Koni. "Army reform and the absorption of the fighters will require a great deal of time – time that we don't have at present."

Without question, IS represents a great danger for Libya and above all a challenge for the unity government. The terror militia controls 250 kilometres of the Libyan coastline from Sirte in central Libya, as well as cells in other parts of the country. The international community may be willing to help the unity government in the fight against IS, but if this is going to happen the government in Tripoli must hold on to power and restore some measure of security there at least.

"We are in favour of a political solution to the conflict and for national unity, to join together to fight the greater enemy IS," agrees commander Abubakr Farshuh. He hails from the influential port city of Misrata, 200 kilometres east of Tripoli. His brigade ("Halbus") has been attacked many times by IS in recent months. The group is one of several from Misrata that assured Sarraj of their support months ago and that protect his government.

"The situation in Tripoli is calm, but no one can guarantee 100 percent security there, as every political faction has its armed henchmen," says Farshuh. Just two days after this interview, there was a gun battle between two groups in the middle of a residential area of the capital, in front of the house of Ahmad Meitig, the unity government′s deputy prime minister. As usual, the incident was followed by contradictory rumours, but it cannot be ruled out that this was a failed attempt to abduct the politician. 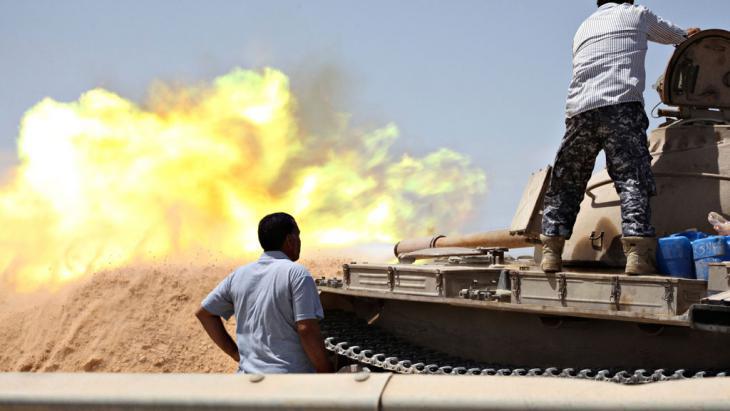 A nation on the brink: after the toppling and the death of Libyan ruler Muammar al-Gaddafi during NATO's intervention in the oil-rich nation in the year 2011, Libya was plunged into chaos. Most of the power is wielded by rival armed militias, among them the jihadist militia the Islamic State (IS)

So far, the UN-backed peace accord has not been able to end the political divisions in Libya. The main sticking point is the role of the army in eastern Libya: under the command of Khalifa Haftar, it has been waging war on extremist groups for two years. His supporters want to prevent the agreement from being realised in its current form, perceiving it as bowing down to the "Islamists" in Misrata and other parts of western Libya, groups they accuse of being in cahoots with IS.

In western Libya on the other hand, the hard core of what's known as the "Dawn coalition" – the opposing side in the civil war – is refusing to cede power to the unity government, which it claims will proceed by bringing western troops into the country.

There can also be no guarantee that armed groups will remain loyal. Apart from representing various political factions, there are also some independent actors in the battle for influence and public money.

Hotly contested above all else is control of the capital; this was a trigger for the civil war back in 2014. "As long as the militias are kept happy, they will play along, but that can quickly change," says Hassan, an engineer from Tripoli.

And whoever you ask on the streets of the Libyan capital – the Libyans want the police and the army to reassume authority. But the unity government, which is dependent on the goodwill of its member factions, will need a great deal of political capital if it is serious about disarming and integrating the rival militias.

A new survey by Arab Barometer adds numbers to the narrative that COVID has led to a harsher reality for women in the Middle East and North Africa. By Jennifer Holleis and Razan ... END_OF_DOCUMENT_TOKEN_TO_BE_REPLACED

Morocco and the European Union are at cross purposes when it comes to the Western Sahara. And, as Germany does not support Moroccan claims to the territory, a major conflict has ... END_OF_DOCUMENT_TOKEN_TO_BE_REPLACED

Turkey's parliamentary and presidential elections are scheduled for June 2023. But they are already casting a shadow. While the opposition is calling for early elections, ... END_OF_DOCUMENT_TOKEN_TO_BE_REPLACED

Recep Tayyip Erdogan, disappointed by the European Union’s reluctance to integrate Turkey into its ranks, has re-directed his country’s diplomacy toward the Maghreb and Africa to ... END_OF_DOCUMENT_TOKEN_TO_BE_REPLACED

Although a unity government was formed in Libya in March 2021, tensions and possible crises between the political actors are already emerging. What problems does the country face ... END_OF_DOCUMENT_TOKEN_TO_BE_REPLACED
Author:
Valerie Stocker
Date:
Mail:
Send via mail

END_OF_DOCUMENT_TOKEN_TO_BE_REPLACED
Social media
and networks
Subscribe to our
newsletter