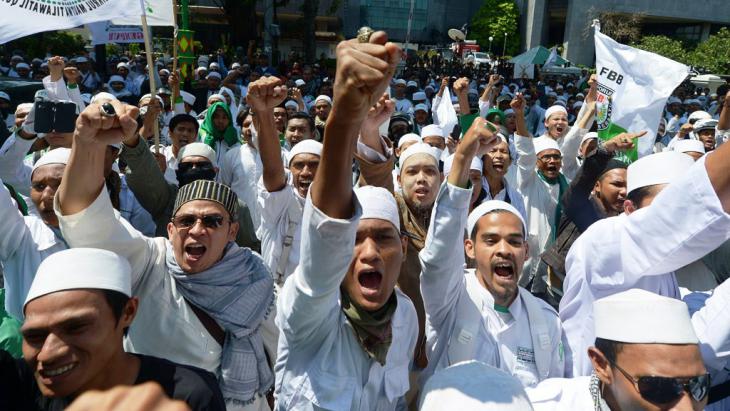 Political Islam in Indonesia
Wahhabism runs into the sand

Many Indonesians are watching with concern as religious intolerance and violence against minorities continues to escalate. But the vast majority are successfully stemming the tide of radical tendencies. By Franz Magnis-Suseno

You can see at first glance that Islamisation is rampant. More and more Muslim women are donning veils. It′s a development that was originally initiated by President Suharto in the 1970s. In an effort to immunise Indonesians against the lure of communism, he systematically promoted the intensification of religiosity.

Only 50 years ago, the majority of the dominant Javanese – who make up 42 percent of the Indonesian population – felt more committed to their Javanese culture than to Islam. Today, they pray five times a day and, if they can, make the pilgrimage to Mecca. You′d be hard pressed to find a village without a mosque on Java anymore.

Not a new phenomenon

There has always been an extremist element to Indonesian Islam. Between 1950 and 1966, "Darul Islam" guerrillas fought in Aceh (Sumatra), Sulawesi and West Java for an Islamic state. A few terrorist initiatives were put a stop to in the early 1980s. But some 3,000 Indonesian mujahideen were already fighting in Afghanistan at the time against the Soviets, paid for by the Americans and spiritually supervised by Osama bin Laden. 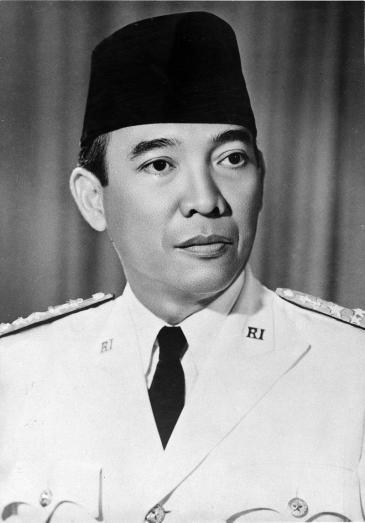 Founding father of Pancasila: on 1 June 1945, Indonesia's founding president, Sukarno, formulated the five principles of Pancasila as a repudiation of the forces seeking to transform Indonesia into an Islamic theocracy after its independence from the Dutch colonisers. According to the state ideology of Pancasila, Indonesia is a secular state where, according to the principle of "belief in the one and only God", Islam together with Christianity, Buddhism, Confucianism and Hinduism are the five officially recognised religions

The democratic opening in Indonesia in 1998 allowed the extremists to enter the public sphere. Some of these groups, such as the notoriously violent "Islamic Defenders Front" (FPI), were cultivated by the police and the military – as a counterforce against the students demonstrating for more democracy.

It was likewise members of the military that allowed the jihadists trained in Yogyakarta ("Laska jihad") to cross the water to the Moluccas, against the express orders of President Abdurrahman Wahid, in order to further foment the conflict between the Muslims and the Christians there.

Saudi Arabia has been fostering puritanical Wahhabism for years through generous donations to Islamic educational institutions. In Indonesia, it is alarming to witness how Islamic fundamentalism is spreading, in particular among students at the major state-run secular universities: take, for example, the group "Hizb ut-Tahrir Indonesia", which envisions a Southeast Asian caliphate. The smaller terrorist groupings, which despite their size are pursued with great zeal by the security apparatus, have been able to recruit many former Afghanistan fighters.

Nevertheless, these groups still have no political influence. The attempt to include a Muslim duty to adhere to Islamic Sharia law in the constitution was quashed in 2001 by the People's Consultative Assembly with 81 percent of the vote. That overwhelming majority and the low number of about 500 IS fighters among the 220 million or so Indonesian Muslims clearly demonstrates that the country's Islamic mainstream has proven itself resilient against extremism.

Two major Islamic organisations can be taken as representatives of this mainstream: the more rural, heavily enculturated "Nahdlatul Ulama" (NU) with 40 million members and the urban, "modernist" "Muhammadiyah", some 30 million members strong. Both groups reject an Islamic state as unfitting for Indonesia. They recognise the current Indonesian regime and its state philosophy of Pancasila, which grants followers of all religions equal rights as citizens, as the definitive form of political organisation for the Indonesian region.

The ethos of Indonesian mainstream Islam as the pillar of state and community has twice been put to the test. In 1945, after Indonesia declared its independence, the constituent assembly decided unanimously to delete an addition to the state philosophy of Pancasila that had previously been laboriously negotiated: this addendum would have obliged Muslims to comply with Sharia laws. 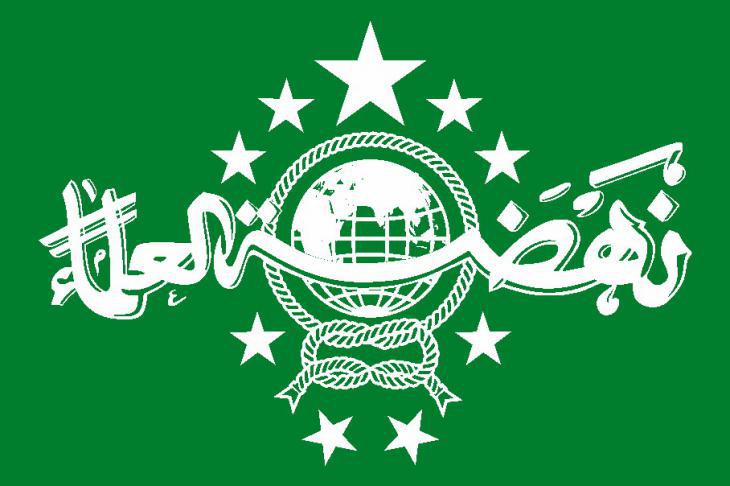 Promoting religious tolerance and upholding Pancasila: the Islamic organisation "Nahdlatul Ulama" clearly rejects a radical understanding of Islam as embraced by the Saudis and issued a fatwa declaring Wahhabism to be a heresy. "Nahdlatul Ulama", Indonesia's largest Muslim organisation with some 40 million supporters, sees its opponents not as Christians or (Balinese) Hindus, but as the Islamic extremists

The assembly held, however, that this provision would have led to discrimination against non-Muslim Indonesians. In the end, the constitution of 1945 did not grant Islam any special status, even though Muslims, at 88 percent of the population, make up the overwhelming majority in the country. Pancasila, which mainstream Islam expressly committed to in the 1980s, is the foundation for the solid unity of the highly pluralistic Indonesian state.

Even more astounding was how Indonesia weathered the dangerous turbulence after the fall of Suharto in 1998, compared for example to what took place 13 years later in Egypt. At the time, Indonesians with the best Islamic credentials took matters in hand. It took Suharto's protege and successor, B. J. Habibie, head of the "Association of Islamic intellectuals" (ICMI), only a few days to set the decisive course for the country's transition to democracy.

His successor, Abdurrahman Wahid, head of the NU for 15 years, further anchored democratisation in the country. At the same time, the former head of "Muhammadiyah", the notorious hardliner Amien Rais, managed in his capacity as chairman of the People's Consultative Assembly (MPR) to ensure that fundamental democratic mechanisms were incorporated into the original, extremely authoritarian constitution of 1945: free elections, for example and the most important human rights from the United Nations Universal Declaration of 1948. 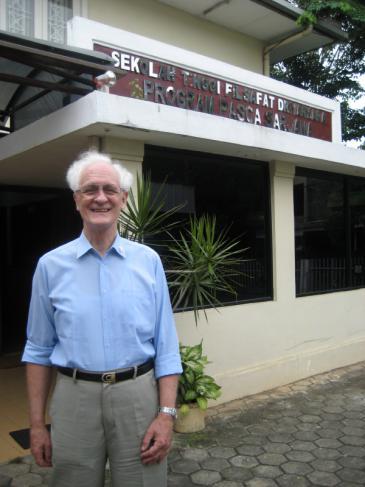 The Catholic theologian and social philosopher Franz Magnis-Suseno has lived in Indonesia since 1961. Vice-chancellor of "Driyarkara" Philosophy University in Jakarta for many years, Suseno received wide recognition for his dedication to interfaith dialogue

Above all, it is thanks to the Islamic mainstream that the brutal civil war that raged from 1999 to 2002 between Christians and Muslims in two regions of East Indonesia – with some 8,000 deaths and multiple massacres on both sides – did not spill over to the main islands of Java and Sumatra.

Contrary to widely held stereotypes that Islam and democracy do not go together, it was the large Islamic "Masyumi Party" that joined forces with the two Christian parties and the "Social Democratic Party" (PSI) to prevail against Sukarno and push through a democratic Indonesia.

Will the brand of Islam practised here – which refers to itself as "moderate" – be able to hold up against radicalisation? "Nahdlatul Ulama" and "Muhammadiyah" fully acknowledge this challenge. "Nahdlatul Ulama" even issued a fatwa declaring Saudi Wahhabism to be heresy. Both groups regard Islamic extremists rather than Christians or (Balinese) Hindus as their opponents.

This tolerance does not extend however to so-called "sects", such as the Shias and followers of Ahmaddiyah, or local messianic movements like "GAFATAR". Their right to exist is rejected across the entire Islamic spectrum.

"Nahdlatul Ulama" and "Muhammadiyah" have nonetheless repeatedly spoken out against acts of violence against such communities. They accuse the state of not fulfilling its duty to protect all citizens from opportunism and adaptation to popular demands made by extremist groups.

"Nahdlatul Ulama" and "Muhammadiyah" are well aware of how appealing radical groups can be to the younger generation. On the other hand, both organisations have open, committed democratic youth groups that support freedom of religion. Taking a forward-looking approach, "Nahdlatul Ulama" and "Muhammadiyah", but also Muslim intellectuals, often invite representatives of other officially recognised religions (Christians, Hindus, Buddhists and Confucians) to their events.

Indonesia's future will probably depend on other factors. If the majority of Indonesians within the existing democracy are able to hope for a better future for their children, the extremists will not prevail. Islam-oriented politicians were after all the ones who took up the demands of the students and democratised post-Suharto Indonesia. Many Indonesians are confident that the new president, Joko Widodo, despite some weaknesses, will be able to further strengthen Indonesia's democracy.

We are in favour of human rights. But One Love armbands are self-righteous and ignore some fundamental issues. Stefan Buchen examines the debate surrounding the World Cup in Qatar END_OF_DOCUMENT_TOKEN_TO_BE_REPLACED

With its traditions of neutrality and non-alignment, Indonesia has had to tiptoe around the Ukraine war debate. Pro-Russia sentiment in the region complicates Jakarta's foreign ... END_OF_DOCUMENT_TOKEN_TO_BE_REPLACED

Calls for an environmentally-conscious form of Islam are growing in Indonesia, as climate change poses enormous ecological challenges for the country. Experts say it could change ... END_OF_DOCUMENT_TOKEN_TO_BE_REPLACED

Indonesia has become a primary battleground between democratic and autocratic visions of Islam in the 21st century, with Nahdlatul Ulama pitted against Abdullah bin Bayyah, a ... END_OF_DOCUMENT_TOKEN_TO_BE_REPLACED

END_OF_DOCUMENT_TOKEN_TO_BE_REPLACED
Social media
and networks
Subscribe to our
newsletter