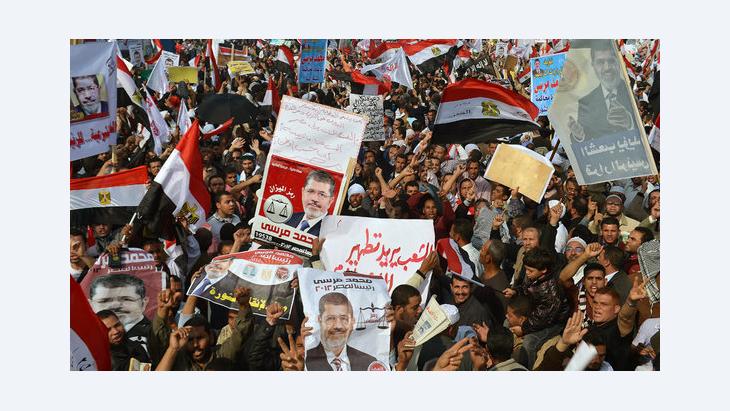 ﻿Demonstrations for and against Egyptian President Morsi took place this weekend in Cairo. Egyptians face the uneasy choice of supporting a constitutional draft or starting the process over from the beginning. Matthias Sailer reports from Cairo

﻿The Egyptian power struggle between the Islamists on one side and the liberals and secular parties on the other does not show any signs of abating. After two major protests held by the non-Islamist parties, the Muslim Brotherhood and Salafists showed their strength on Saturday (1 December 2012).

Hundreds of thousands took to the streets of Cairo to demonstrate support for President Mohammed Morsi and his controversial presidential decree. State television made a point of showing the massive rally for Morsi.

The license plates on the many empty, parked busses left little doubt that many of the participants were not from Cairo, but brought into the city from other parts of Egypt. After the demonstration, the busses were gone.

Constitutional referendum for a divided people 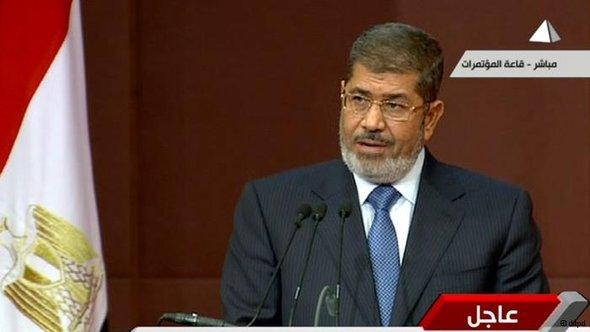 "In his speech, president Morsi called for 'national dialogue', but there was little in the way of dialogue in how the Islamists pushed the draft constitution through past nearly all resistance put up by secular groups," Sailer writes

​​Scherif Abd El-Wahab, a 60-year-old man from Alexandria, summarized his fellow Islamists' positions: "I am here today to support the country and the elected president. The people at Tahrir Square were for dissolving parliament and now they want to dissolve the constitutional assembly. They want to destroy the country."

Late on Saturday evening, Morsi announced a referendum on the draft constitution would be held on 15 December. In the square where Islamists demonstrate, the announcement was met with cheering and fireworks. A few kilometers away at Tahrir Square, home to the anti-Morsi demonstrations, people raised their shoes to show their contempt for Morsi and the draft constitution. Deeply divided, the likelihood of compromise after Morsi's speech is small.

Morsi's speech also showed the contradictions between his statements and actual developments. In his speech, he called for "national dialogue", but there was little in the way of dialogue in how the Islamists pushed the draft constitution through past nearly all resistance put up by secular groups.

Morsi stated his estimation of the judiciary, despite using a decree to annul its authority. Finally, the president emphasized that the constitution would guarantee freedom of expression and religion but both of these human rights are limited by the constitutional draft.

Still for Morsi's supporters, the constitution is ideal.

"For me it's just important that Shariah law is used to govern the country," said Mostafa, a man in his mid-30s. "If that is not going to be the case, I won't vote for it. The liberals and secular groups were in the constitutional assembly, but they left before the constitution was passed. They do not want the country to have a constitution."

A divided people will decide in two weeks time whether the draft becomes Egypt's constitution, and it is currently impossible to gauge how the poll will end. The Muslim Brotherhood is not making it easy for Egyptians: they have presented a vote approving the draft constitution as a step towards stability and an end to the Morsi's dictatorial powers. A vote to reject the draft, on the other hand, would lead to the creation of a new constitutional assembly that would have to come up with a new document. The consequences would be months of insecurity with Morsi in office as president. 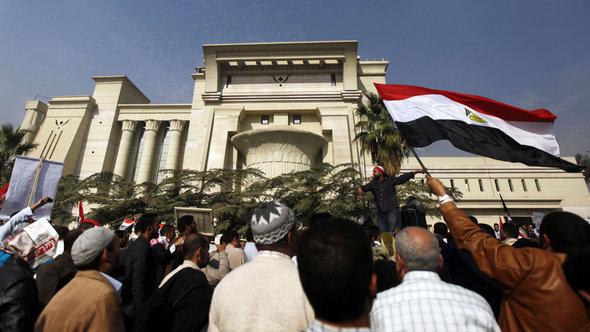 ​​There is no easy choice for Egyptians who have grown tired of revolutions. On top of that, many people are simply poorly informed. "The constitution is excellent, really excellent," Sherif Abd El-Wahab said. "It covers everything – even the minorities because it gives them all rights, especially the Christians."
But it's religious minorities, including Shia Muslims, who face the most discrimination under the draft constitution. In a sign of protest, Christians also pulled all their representatives out of the constitutional assembly.

How exactly a constitutional referendum will take place without the support of the judiciary is also unclear. Most judges have gone on strike, including those sitting on the Constitutional Court. On Sunday, the court said it would consider dissolving the constitutional assembly. To prevent that the Islamists blocked the court building's entrance after which the court adjourned its duties indefinitely. In a statement, the court said it was a dark day for Egypt and that judges were unable to work in the current conditions of hate and agitation.

On Sunday, the judges, who typically give their seal of approval to votes, said they would be unwilling to preside over the constitutional referendum.

Political analyst Taqadum al-Khatib argues that Egypt can, in co-ordination with its European partners, develop a common vision to solve the complex conflict in Libya. For this to ... END_OF_DOCUMENT_TOKEN_TO_BE_REPLACED

The upheavals of the past year in the MENA region are arguably as momentous as those of the Arab Spring in 2011. Yet perhaps the biggest difference is that our interest seems to ... END_OF_DOCUMENT_TOKEN_TO_BE_REPLACED

In 2019, the long-running Penguin Classics series released its first novel translated from Arabic: Tawfiq al-Hakim’s "Return of the Spirit", conveyed into English by William ... END_OF_DOCUMENT_TOKEN_TO_BE_REPLACED

Equality in divorce, a ban on polygamy: reformers of Islamic family law have a clear agenda. They are exploiting the ambiguity of traditional jurisprudence. By Joseph Croitoru END_OF_DOCUMENT_TOKEN_TO_BE_REPLACED