State of law versus theocracy: coming up on the parliamentary elections, Iraq's party landscape is regrouping, accompanied by devastating terrorist attacks. Details from Baghdad provided by Birgit Svensson

​​ A good six years after the invasion by American and British troops, Iraqis are trying to find a word to describe the period that followed. Some call it the "Post-Saddam Era" in order to summon the memory of the former dictator.

They cite the stability and security that prevailed during the Saddam regime, sorely missed by many these days. Others speak of the period following liberation, seeing before their mind's eye the image of the bronze statue of Saddam Hussein toppling from its pedestal as symbol of his fall.

The idea of liberation is also meant to express approval for those who brought about the end of the dictator's rule. Still others speak of the time before the "occupation", referring to the unwanted presence of foreign troops who brought Iraq terrorism and the loss of its sovereignty.

At the universities and in the media, on the other hand, the phrase "turning point" is often heard these days – a neutral term that avoids making any value judgement. Mohsen Abdul Amir from Mustansariyah University in Baghdad thinks "turning point" is the most apt way to describe what is currently happening in Iraq.

"We discuss varying points of view with the students in order to sensitise them to the changes our country is undergoing so that they can gain greater distance from the issues", says the professor. And there are certainly changes enough underway in the land of the two rivers: a change in regime is taking place today that could hardly be any bloodier.

A reminder of the August attacks

The killing continues, although there have indeed been fewer attacks in the last twelve months, and Iraq has receded from the public eye somewhat due to the escalation of events in Afghanistan. 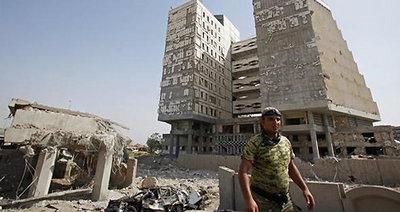 Clear message behind the attacks: the extremists want to show that the Iraqi government can't even defend itself, much less protect the population, writes Svensson

​​ US President Barack Obama views the military engagement on the Tigris and Euphrates as "not his war" and wants to end it as swiftly as possible. But two car bombs exploded Sunday morning (25 October) near Baghdad's Green Zone, with dire consequences.

The government has set the official death toll at 136, with an additional 500 injured. It was the most devastating attack since the withdrawal of US troops from Iraqi cities in late June, claiming more lives than nearly any other since 2007.

The scenario on Sunday mirrored exactly that of 19 August of that year, when two car bombs went off in quick succession in front of the foreign and finance ministries, killing over 100 bystanders.

This time, the Justice Ministry and Baghdad municipal administration building were the targets. The message behind the bombings is clear. They are meant to demonstrate that the Iraqi administration can't even defend itself, let alone protect the population.

Just as in August, the government lost no time on Sunday in making accusations. Government speaker Ali al-Dabagh, who was coincidentally at a hotel nearby when the blasts went off, blamed Al Qaida, together with members of the Baath Party and Saddam loyalists. Officially, no one has as yet claimed responsibility for the attack.

The August assault was at first blamed on the Baath Party before Al Qaida claimed responsibility on its website. Only recently the Iraqi government, and in particular foreign minister Hoshiar Zebari, succeeded in persuading the UN to launch an investigation into the attacks on his ministry and the ministry of finance. Now, the UN will presumably have to expand its mission.

Zebari has demanded that Syria immediately extradite to Iraq the head of the Baath Party, who has gone into hiding there, but Damascus strictly refuses. An agreement between the two countries to cooperate more closely in future, signed just one day before the fatal car bombings on 19 August, has since been put on ice.

More than a diplomatic crisis: Iraq's foreign minister Hoshiar Zebari (left) during mediation talks with Syria in Istanbul on 17 September

​​ The resentment felt between Baghdad and Syria is more than just a passing diplomatic crisis. Nothing was changed by Turkey's attempts at mediation at the regional conference of interior ministers that took place in mid-October at Sharm el Sheik in Egypt. The US administration has long accused Syria of supporting terrorism in Iraq, something Assad's government has always denied.

In the meantime, Al Qaida has reasserted its presence in its former strongholds as well, the provinces of Anbar and Diyala, demonstrating with suicide bombings in Fallujah, Ramadi and Bakuba that: "We're still here!"

This is even more surprising seeing as the two provinces targeted by the terrorist attacks were regarded just a few months ago as pacified, justifying the withdrawal of US troops from Iraq's cities in late June.

The "surge" initiated by General David Petraeus in February 2007, the security plan for Baghdad and the neighbouring provinces, also entailed an alliance between the Americans and the Sunni tribal leaders against Al Qaida.

The so-called Sahwa fighters, tribal militias, collaborated closely with the Iraqi security forces and the US soldiers, and managed according to their own account to drive international terrorist groups like Al Qaida out of the provinces and to deprive them of grassroots support.

With the withdrawal of US forces from the cities, the Iraqi government must now take charge of the alliance with the tribes.

The US planned for the tribal militias to be integrated into the security forces. But to date only about 15 percent of the tribal fighters have found a place in the army or police force.

The Americans wanted the tribal militias to be integrated into the security forces. But only about 15 percent of the fighters have found a place in the army or police

​​ The others have gone without pay for months, fostering growing discontent. The government has recognised this and has promised to pay the outstanding wages shortly, as well as integrating more Sahwa fighters into the regular security forces.

As many of the mostly Sunni militiamen were originally part of the Iraqi resistance against the occupation and had contacts with both Saddam loyalists and Al Qaida, they are at risk of changing sides again at any time, using this to put pressure on the Shiite-dominated government.

The government is at present too busy with its own concerns to take action. Leading up to the parliamentary elections on 16 January, Iraq's party landscape is regrouping. While in election year 2005 ethnic and religious groupings and alliances dominated, Iraq is now riding a wave of secularisation and patriotism.

This is noticeable everywhere in the streets of Baghdad. More and more women are leaving their headscarves at home in the closet. Tight t-shirts and skirts are in; Islamic dress is out. Even mini-skirts are no longer rare. Zadoun Street on the eastern bank of the Tigris has turned into a veritable barhopping scene. The row of brightly lit establishments beckons guests late into the night.

Just one year ago the street was nearly deserted after radical Islamists – both Sunni and Shi'a – ignited car bombs before the shops almost daily. Alcohol is of course anathema to the Islamic fundamentalists.

Prime Minister Nouri al-Maliki was the first to sense change in the air and already emphasised his secular leanings in the provincial elections in January. His efforts met with success: his party ticket won the majority of votes and is now represented in almost all provincial parliaments.

Turning point in Iraq: for some, the symbolic toppling of the Saddam statue meant the end of dictatorship, for others, the beginning of foreign occupation

​​ His recent split with the once-powerful, religiously dominated Shiite Alliance was therefore to be expected. On the state-run television station "Al Iraqia" the head of government announced in late September that he had put together a coalition for the upcoming election with the promising name "State of Law", representing "a historical turning point in the process of building a modern Iraqi state."

The aim of the coalition is to go beyond sectarian concerns and achieve integrity and professionalism on a national foundation – a clear rejection on Maliki's part of his former coalition partners, above all the Islamic Supreme Council in Iraq (SIIC).

His coalition, Maliki declared, sets out to represent all Iraqis who refuse to let themselves be guided by the "narrow-minded interests of individual ethnic groups or sects." He confirmed that he is prepared to nip in the bud any new attempts at fomenting sectarian strife and will resolutely stand up against any terrorism that results.

In the meantime, the State of Law bloc includes not only Maliki's own Dawa Party, but also 30 additional political groupings, and continues to grow. Iraq's communist party has joined, as have Sunni tribal leaders, the Iraqi-Arab Alliance, the Turkmen Islamic Union and the Feily Kurd bloc, just to name a few.

Political observers in Baghdad now anticipate a battle of wills between the State of Law coalition and the likewise newly founded Iraqi National Alliance (INA), which in principle comprises all the parties in the former Shiite Alliance, with the exception of Maliki's Dawa Party and augmented by a few Sunni "figureheads", as critics scoff.

The first sign of this power struggle is the tug of war regarding the new election law, which has been inciting fierce controversy for the past several weeks. The law provides for the number of parliamentary seats to be raised from 275 to 311, as each province should in future form a uniform electoral district and receive a number of seats in proportion to its population.

Up to now, the entire country has been considered a single electoral district. Maliki also wants to push through open lists for the national elections, like those implemented in the provincial elections in January. Voters would then choose both a person and a party, alliance or grouping.

Representatives from the INA are pleading to maintain the closed lists in the hope of garnering more votes with that scheme. Last Wednesday (21 October) parliament decided that the dispute should be arbitrated by the National Security Council and postponed voting on the new law until Sunday.

When parliament then convened in its chambers to vote, the two bombs exploded just metres away.

Birgit Svensson is part of the Weltreporter.net network and works as a freelance journalist for various German media outlets. She is currently based in Iraq.

Interview with Volker Perthes
Iraqi Decision Makers under Pressure to Reach Consensus
President Obama intends to withdraw all US armed forces from Iraq by 2011 at the latest. According to political scientist Volker Perthes, this means that Iraq's various power elites are faced with the challenge of drafting shared, workable policies. Günther Birkenstock spoke to him

The Federal Structure of Iraq
More Power to the Powers That Be
The Syrian jurist Naseef Naeem has completed a scholarly study which closely examines the emergence, framing, and consolidation of the new Iraqi constitution. The main flaw of this constitution, says Naeem, is that it grants the central government too little power. Sebastian Sons presents the study

END_OF_DOCUMENT_TOKEN_TO_BE_REPLACED
Social media
and networks
Subscribe to our
newsletter