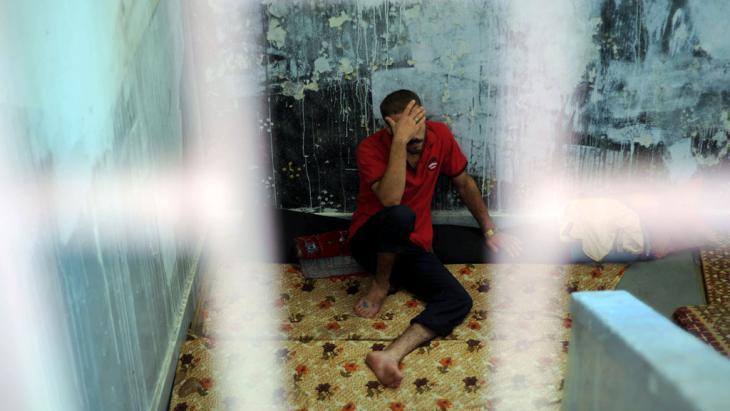 More than 215,000 Syrians are languishing in the prisons of the Syrian regime. But despite a UN resolution, it seems that hardly anyone is interested in their fate. Unless one of the victims receives a prize, that is: for example the journalist and lawyer Mazen Darwish, who was recently awarded the UNESCO World Press Freedom Prize 2015. By Kristin Helberg

Mazen Darwish is a reserved man, his voice quiet, his gestures cautious. The only thing he does with confidence and ease is light cigarettes, one after the other, until smoke clouds the air of the two basement rooms of his Media Centre.

Anyone who wanted to see him, had to know exactly where to look, because nothing outside the inconspicuous apartment block on a quiet side street in Damascus betrayed the existence inside of the Centre for Media and Freedom of Expression that Darwish founded. For years, the lawyer used the centre as his base for reviewing Syria's media landscape, writing studies, organising training courses and documenting the abuses of the regime.

Like most non-governmental organisations in Syria, the Centre for Media and Freedom of Expression worked without an official permit. It was a constant tightrope walk, Darwish said back in 2009. Rather than fearing what actually might happen, the secret service was wary of free thinking itself. "As soon as they sense that a different, independent opinion exists that does not match the official line, they get nervous," Darwish said at the time. "They fear the idea of freedom."

This is why the regime persecutes people like Mazen Darwish – lawyers, journalists and activists. And they began to do so with renewed vigour after the revolution broke out in the spring of 2011, when the idea of freedom turned into a demand voiced by hundreds of thousands of citizens. Less than a year later, in February 2012, the secret service raided the two basement rooms of the centre and arrested Darwish and several colleagues.

In February 2013, Darwish and two of his employees, Hussein Ghareer and Hani Al-Zitani, were charged with "aiding and abetting terrorist acts". At worst, they could face a death sentence. However, the trial keeps getting postponed. In early 2015, Darwish was moved from the Adra central prison in Damascus to a detention centre near Homs. In a sense, one could say that the 40-year old father was fortunate: his family knows where he is, and several international organisations are trying to help him. 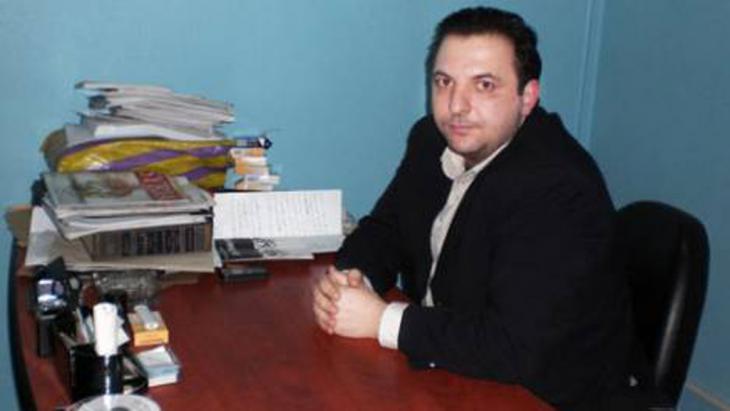 "As soon as they sense that a different, independent opinion exists that does not match the official line, they get nervous," said journalist and lawyer Mazen Darwish before his incarceration. "They fear the idea of freedom"

By contrast, most prisoners of the Assad regime are referred to as "the vanished". These are people who were arrested at checkpoints, border crossings or in house searches and whose subsequent fate is unknown, says the Syrian lawyer Z. He estimates their number at 150,000.

Before the revolution, Z. spent years defending political prisoners, but he has now fled the country and chooses to remain anonymous out of fear for his relatives in Damascus. "It used to be that someone would be arrested, and we knew he would come back at some point," Z. recalls. Today, he says, an arrest means death.

At least 215,000 Syrians are languishing in the prisons of the Assad regime. This is the figure cited by the Syrian Network for Human Rights (SNHR), an independent and professional non-governmental organisation. Its data is used by the UN and others. Conditions are particularly dire in the underground torture chambers operated by various intelligence services to which no one is given access, says the lawyer Z.

He and several colleagues have been documenting the conditions in Syria's prisons for years. "About 100 prisoners are crowded together in cells measuring four by four metres. They can neither crouch nor sit, but must in some cases remain standing for weeks. The lucky ones are able to lean their backs against the wall," says Z. The prisoners are driven to the very limits of their physical and mental endurance. Some of them break down; others end up going mad. "There are prisoners who beat their head against the wall until they're dead."

A particularly notorious torture centre in Damascus is the Mezzeh Prison, located near the airport. This is where Orwa, a journalism student, spent several weeks in the early summer of 2011. His crime was to film the demonstrations and the shots fired by the army, for which he was arrested in May 2011, with 62 videos on his computer.

"They wanted to know why I filmed the protests, who was behind it, who financed me – the usual questions," the young man remembers. "Then they accused me of spying for the West." Orwa was indicted for "fighting against the Constitution using military means", but was released on probation due to overcrowding at the prisons. The young man, 25 years old at the time, went into hiding and fled to the Lebanese capital, Beirut. 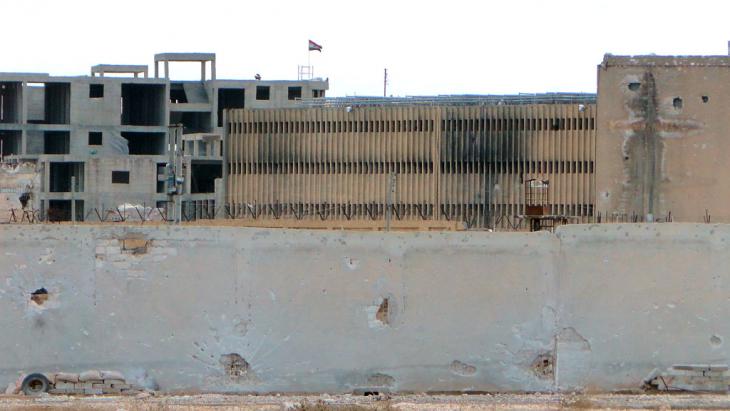 "At least 215,000 Syrians are languishing in the prisons of the Assad regime. This is the figure cited by the Syrian Network for Human Rights (SNHR), an independent and professional non-governmental organisation. Its data is used by the UN and others," writes Kristin Helberg. Pictured here: Aleppo central prison

Orwa describes daily life at the Mezzeh Prison as one never-ending punishment. "It was crowded, we got little to eat and if we asked to use the toilet, we were beaten." Hardest to bear though were the sounds of torture they could hear around the clock, the student says. "It broke us. It's even worse than being tortured yourself – the electrocution, the blows with leather straps or people being beaten unconscious."

An average of seven Syrians die every day under the systematic torture of the Assad regime. The Syrian Network for Human Rights has documented 11,427 such cases over the past four years. And torture is only one of several causes of death in prisons. "Most of the prisoners die for lack of medical treatment," says human rights lawyer Z.

They fall victim to diarrhoea and the resulting loss of fluids, or of flu that turns into pneumonia, or asthma, or heart problems, or a small injury that gets infected and becomes gangrenous. Even Paracetamol is not available, says Z. If a sick prisoner knocked on the door, the response was "Tell us when he's dead so we can come fetch him", he says.

The Assad regime seems to be keeping close track of the death count. The 11,000 corpses that the military photographer with the code name "Caesar" photographed on behalf of the regime all wear numbers. The emaciated bodies are scarred by torture.

The photos, which were smuggled out of the country, have been inspected by international experts and found to be genuine. They were shown recently at UN headquarters in New York. Now they are accessible on the Internet to Syrians looking for loved ones, at least able to gain certainty with the help of the photos. The images could also serve as evidence in the event of prosecution before the International Criminal Court.

The lawyer Z., who spent several years in prison before the war, is joining others in calling for such a trial against Assad and his fellow-leaders. "Being beheaded by IS is a more merciful death than wasting away for months," says the lawyer. The prisoners spend their days yearning for death – to put an end to their suffering and as the only escape from horrors that no human can bear.

Home
Print
Newsletter
More on this topic
The Syrian conflict: The illusion of a political solutionSyria and the international community: The least we can do for SyriaFreedom of the press in Syria: The truth can cost livesThe kidnapping of the "Douma 4": The Salafist and the human rights activist
Related Topics
Al-Qaida, Arab Spring, Arabellion, Assad regime, Freedom of the press, Human rights, Humanitarian aid, Jihadism | Jihadists, Syrian Civil War, Syrian opposition
All Topics

Past attempts to reconcile logic and belief within Islam tend to be dismissed today – not because they lack merit, but because they were politically defeated, argues Mustafa Akyol END_OF_DOCUMENT_TOKEN_TO_BE_REPLACED

November 2022 sees the Arab world firmly in the spotlight with the COP27 in Egypt and the FIFA World Cup in Qatar. Public trust in MENA governments is weak, thanks to their ... END_OF_DOCUMENT_TOKEN_TO_BE_REPLACED

Thanks to climate change, the Middle East is heating up faster than any other part of the world, putting the region's ancient pyramids, castles, holy and other heritage sites at ... END_OF_DOCUMENT_TOKEN_TO_BE_REPLACED

After a two-year hiatus, the Arab League re-convened at the beginning of November in Algiers against a backdrop of uncertainty and discord. By Pierre Boussel END_OF_DOCUMENT_TOKEN_TO_BE_REPLACED

In the run-up to the COP27 global climate summit, hosted by Egypt in November, it is worth noting that little rainfall, aggressive heatwaves and worsening drought make the Middle ... END_OF_DOCUMENT_TOKEN_TO_BE_REPLACED
Author:
Kristin Helberg
Date:
Mail:
Send via mail

END_OF_DOCUMENT_TOKEN_TO_BE_REPLACED
Social media
and networks
Subscribe to our
newsletter