Last year, Colonel Gaddafi announced his intention to modernise the Libyan "state of the masses". At the recent General People's Congress, however, some of his decisions were rescinded, leaving widespread confusion among Libyans and experts alike. Beat Stauffer has the details 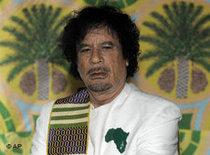 Uncertainty and confusion: Libya's General People's Congress recently decided not to implement Gaddafi's idea of directly distributing oil wealth to the people in the near future

​​Speaking on the 39th anniversary of the revolution on 1 September 2008, the Libyan leader, Muammar Gaddafi, announced a series of far-reaching political reforms including the abolition of a number of ministries and the partial privatisation of numerous state-run companies, especially those in the electricity and water supply sectors. The announcement sought to prepare Libyans for the fact that they will soon have to pay for basic state services. To ensure that the people will be able to pay for these services, Gaddafi spoke of directly distributing the country's oil wealth to the people.

Gaddafi's speech triggered consternation and uncertainty among both the Libyan people and foreign observers. Ever since, people in Libya have been wondering whether to take their leader's announcement seriously and what the actual consequences of such reforms would be. The confusion was further intensified in early March when the Libyan People's Congress revoked certain elements of the reform package.

It is possible that the confusion caused by Gaddafi's initiative was intended to strengthen the colonel's grip on power, which has remained secure since 1969. There is little to indicate that the system will actually be changed in his fortieth year at the helm since seizing power during the revolution; after all, Gaddafi successfully averted the threat of a foreign-backed regime-change by amending his foreign policy in 2004.

Anyone who wants to find out more about the implementation of Colonel Gaddafi's radical reform plans and test the waters of public opinion, generally meets with a wall of silence. Most people in Libya make a show of not being interested in politics and are at most ready to express an opinion on such awkward issues in private. 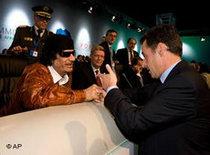 Rehabilitated internationally, isolated at home? Ever since Gaddafi's international isolation ended in 2003, he has been a popular trading partner for the EU; in Libya, however, he is still a feared authoritarian ruler.

​​Making contact with foreign citizens can still have unpleasant consequences. Moreover, anything relating to the revolutionary leader and de facto head of state, Gaddafi, and the official state ideology is largely taboo.

As far as Gaddafi's radical reform plans are concerned, the Libyan population would appear to be divided into two camps. While one camp remains concerned and is afraid that the Libyan leader might be about to launch the country into a new adventure of uncertain outcome, the other is convinced that this is nothing more than another one of Gaddafi's escapades and expects few - if any - ramifications.

"This is just a big show; once again, he just wants to demonstrate his revolutionary line," says one source, an entrepreneur who has extended his sphere of activity to Europe.

Another source - a man in his mid forties who runs a small company in Tripoli - sees things very differently. While he too does not believe that Gaddafi's plans will be implemented as outlined by the leader last year, he is obviously worried. "Gaddafi has come up with a few crackpot ideas in his time, and we ended up paying a high price for them," he says. He went on to say that he considers Gaddafi perfectly capable of taking steps that would plunge the country into huge difficulties.

Experts not of one mind

Even the Libya experts at European universities and research institutes cannot agree about the status and the practical consequences of Gaddafi's speech. For example, political scientists Moncef Djaziri (University of Lausanne) and Isabelle Werenfels (German Institute for International and Security Affairs, Berlin) view some aspects of the situation very differently indeed.

The two Libya experts do agree that Gaddafi's speech must certainly be taken seriously and cannot simply be dismissed as empty revolutionary rhetoric. For Djaziri, the content of the speech was not really all that surprising; he considers it to be in line with Gaddafi's general theory that the people should rule themselves. 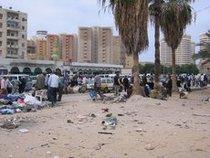 Despite the lifting of UN sanctions and the growing profits from the oil industry, the people of Libya do not seem to be getting a share of the country's new wealth

​​In recent years, the revolutionary leader has repeatedly criticised state institutions and taken the side of the people, as if to demonstrate that he himself wields no real power. In this regard, Djaziri does not consider the speech to be anything new, but rather evidence of continuity. Werenfels also points to the fact that Gaddafi has in the past abolished ministries, only to bring them back to life again a short time later.

That being said, Werenfels also sees the "permanent state of uncertainty" that such announcements create in the Libyan population as a form of continuity.

The two Libyan experts largely agree that the timing of the speech was anything but a coincidence. They both feel that there is a huge sense of disappointment and frustration among ordinary Libyans that the opening up of the country to the West and the current high level of income from the oil business have not resulted in a significant improvement in living conditions.

"Gaddafi himself realises that the institutions are not working as intended," explains Djaziri. In this regard, his speech should be seen both as an acknowledgement that things are not as they should be and an appeal to the people of Libya to take matters into their own hands.

Nevertheless, Djaziri has observed that Libyan society has been becoming more open in recent times. He says that an increasing number of associations and "discussion forums" have been founded in which Libyan citizens can debate social issues "relatively freely" and in which reforms are repeatedly being called for. All in all, explains Djaziri, these kinds of associations are the first green shoots of Libyan civil society.

Werenfels's assessment of the situation is diametrically opposed to that of her colleague. She feels that independent Libyan civil society is non-existent at present and that discussion forums on political themes are a rarity.

Is the Libyan revolutionary leader seriously thinking of actually implementing his radical plans? As far as Werenfels can see, Gaddafi is indeed "obsessed" with the idea and will try to implement it at least in part.

This would, however, have "disastrous consequences" for Libyan economy and society because the private sector in the country is not sufficiently advanced and does not yet have the requisite expertise.

Certain influential Libyans who are aware of the responsibility they bear still hope they can convince Gaddafi either not to implement the project or only to do so in a heavily diluted form. In the case of Gaddafi's plan actually being implemented, Werenfels forecasts that Gaddafi's plans will lead to a "collapse" of the welfare system and some parts of the service sector.

A move towards pragmatism

One must also consider the possibility of resistance to the radical reform plans. Will Gaddafi not create many enemies among the hundreds of thousands of state functionaries and others who benefit from the system as it now stands? Djaziri explains that there is indeed strong resistance to the plans. 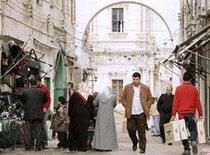 Everyday life in Tripoli: many of the six million Libyans are complaining that the country has not developed despite the billions of oil dollars flowing into the country

​​"Tough reactions" may indeed come from the middle classes in particular, he says. After all, it is no coincidence that Gaddafi is turning to the general public and in particular to the silent majority in the country to win them over for his plans.

Finally, there is the question as to whether Gaddafi does not risk undermining the foundations of his own state model and the corresponding ideology by introducing such a radical reform. Werenfels feels that to all intents and purposes, such a radical programme of privatisation does indeed go against his principles. If, however, one assumes that the existing ministries are "perverting" the will of the Libyan people, the whole thing just might be justified by Gaddafi's ideology.

Djaziri points to the fact that Gaddafi's Green Book, his political manifesto from 1975, does not actually contain a clear doctrine on state and public sector policies. Moreover, contrary to his reputation, Gaddafi frequently evinces himself as a man of a certain pragmatism.

Originally, the plan was to abolish the ministries by the end of 2008. However, the two Libya experts agree that practically nothing has happened to date. The partial revocation of the reform plans by the People's Congress on 3 March 2009 is another hint that the plans are proving difficult to implement.

That being said, Djaziri is convinced that the ominous speech has certainly set things in motion at institution level. There have, for example, been numerous debates about reforming the system both at the level of the Local People's Congresses and that of the General People's Congress. Libya, feels Djaziri, is "at the start of a process of transition" that is receiving too little coverage in the West.

Isabelle Werenfels is much more sceptical about the current situation. As far as she is concerned, the situation for reformists has become much more difficult in recent months and the atmosphere in these circles at least is "gloomy". Another foreign observer reaches a similar conclusion: in view of the complete lack of transparency about how the announced measures are to be implemented, this observer notes considerable uncertainty and even fear of chaotic circumstances in the coming years in large parts of the Libyan population.

Libya
Looking for a Fourth Way
Revolutionary leader Muammar al-Qadhafi is currently attempting a foreign-policy balancing act: On the one hand, he is making extensive concessions in an attempt to gain favor in the West, while on the other hand holding fast to his vision of becoming the leader of a "United States of Africa". Arian Fariborz reports

END_OF_DOCUMENT_TOKEN_TO_BE_REPLACED
Social media
and networks
Subscribe to our
newsletter