Fear is a cornerstone of the Islamic Republic. But, since Iran's post-election crisis in June, the people have become fearless, and in turn are terrifying the government. A commentary by Mehdi Khalaji 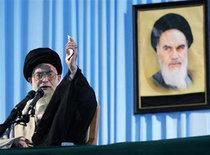 Lack of charisma and learning: the street violence and prison brutality of recent months has undermined Ayatollah's authority and shaken his social base

​​Iran's clerical regime governs by a simple formula: he who is the most frightening, wins. "Victory by terrifying" is trope that is present in many of Supreme Leader Ayatollah Ali Khamenei's speeches. Indeed, it is a reliable guide to his political philosophy.

This view was not invented by Khamenei, but rather is drawn from the Koran and the Shiite tradition. The Iranian Revolutionary Guard have uniforms bearing a Koranic verse that reads, "Make ready for them whatever force and strings of horses you can, to terrify thereby the enemy of God and your enemy, and others besides them that you know not; God knows them." Furthermore, in the Shiite tradition, the strategy of the Mahdi, the Shiite Messiah, will be to intimidate all his enemies upon his return to Earth.

A "soft war" against the Islamic Republic

But cultivating fear in others also makes one more susceptible to fear, and nothing is more frightening to Khamenei and the leaders of the Islamic Republic than the social dynamism unleashed by the democratic movement brewing inside the country.

The regime seems convinced that there is only a small likelihood of a military attack on its nuclear program. It does not believe that sanctions can bring about its collapse. Thus, external forces do not appear to pose much of a threat. 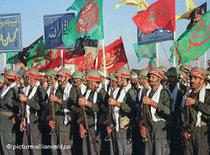 "Make ready for them whatever force and strings of horses you can, to terrify thereby the enemy of God and your enemy": the Iranian Revolutionary Guard

​​What has shaken the government, and indeed threatens the existence of the ruling Islamic ideology, is the pressure of the Iranian people for human and political rights. Hossein Saffar Harandi, a former minister of culture and Islamic guidance, expressed this fear when he said that "citizens who want the government to be accountable before the people (are) part of a soft war against the Islamic Republic."

For 30 years, the Islamic Republic has relied on the heavy hand of the internal-security apparatus to silence dissidents and critics. Fear is a cornerstone of the republic. But, since Iran's post-election crisis in June, the people have become fearless, and in turn are terrifying the government.

Cut off from the possibility of compromise

The extent to which Khamenei fears this social upsurge is stunning. He is afraid of the humanities, books, arts, universities, satellites, the Internet, and even mobile phones. For him, the state must control public access to global culture and technology. If not, these forces will work to undermine the state.

Unlike the Islamic Republic's founder, Ayatollah Ruhollah Khomeini, Khamenei lacks charisma and deep learning. Both his political legitimacy and religious authority are highly questionable, and the street violence and prison brutality of recent months has undermined his authority and shaken his social base. Increasingly reliant on the Revolutionary Guard as the bulwark of his regime, Khamenei has cut himself off from the possibility of compromise. 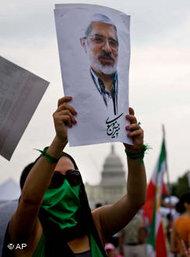 "What has shaken the government, and indeed threatens the existence of the ruling Islamic ideology, is the pressure of the Iranian people for human and political rights", writes Khalaji

​​Khamenei's foreign policy is now completely subject to how the domestic situation in Iran develops. As recent months have shown, he will consider a compromise with the West only when he loses his certainty that all is under control internally. It is like a seesaw: Khamenei's domestic weakness changes the balance of Iran's foreign policy.

Thus, initially intimidated by the post-election crisis, the regime acceded to the October 1 proposal in Geneva that would have allowed the controlled enrichment of Iran's uranium outside the country. In November, when the government thought that street brutality had intimidated the protest movement, Iranian officials backed away from the compromise.

Effective leverage against the nuclear program

In this sense, the Iranian people can be regarded as a strategic ally of the West, not only because they want democracy at home and peace in the region, but because their continued protests offer the West the most effective leverage against the Islamic Republic's nuclear program.

This regime cannot survive in the long term with a political crisis such as the one it now faces. Continued crackdowns would result in a military dictatorship, while an accommodation with the protest movement would produce some kind of consensual semi-democratic government. In either case, however, the democratic movement would not die. It would reemerge continuously, despite heavy repression over short periods of times, raising the kinds of challenges that pose an existential threat to any non-democratic government.

Support of human rights and democracy in Iran is not only a matter of morality. It should be a strategic priority for the West. Empowering the Iranian people means weakening Khamenei and his military allies. And a weakened Khamenei is more likely to compromise on the nuclear front.

Mehdi Khalaji, who studied for 14 years in seminaries in Qom, Iran, is a visiting fellow at the Washington Institute for Near East policy. Khalaji's father, a cleric in Qom, was recently arrested by the regime, and his family have had their passports confiscated.

Iran's Political Clerics
The Absence of a Credible Religious Authority
After 1979, the religious seminary establishment came to be considered a source of political legitimacy. But even though the Iranian regime consolidated its mastery of the Shiite network in the Middle East, the strategy is beginning to backfire, writes Mehdi Khalaji

Egypt's Muslim Brotherhood and Iran
Rapprochement between Sunnis and Shiites?
Against the backdrop of recent tension between the Egyptian government and Hezbollah, Mehdi Khalaji, a senior fellow at the Washington Institute for Near East Policy, assesses the complex relations between the Egyptian government, the Sunni Muslim Brotherhood, and the Shiite regime in Iran from an American perspective

END_OF_DOCUMENT_TOKEN_TO_BE_REPLACED
Social media
and networks
Subscribe to our
newsletter