But, in the meantime, he has launched a (euphemistically named) "anti-corruption" campaign that has raised red flags for outside observers. Since last November, MbS has had hundreds of members of the Saudi elite – including princes and businessmen with international profiles – arrested on dubious grounds and with no regard for the rule of law.

To be sure, Saudi Arabia lacks a basic code of laws or legally enshrined rights. And many frustrated Saudis might welcome the fact that those rounded up in the purge have agreed, under duress, to "return" some of their obviously ill-gotten fortunes to the treasury – which, of course, is controlled by the Crown Prince.

MbS – a dictator in the making

But even if MbS succeeds in shoring up his power and endearing himself to the people in the short term, it has become clear that he intends to rule as an authoritarian despot when he succeeds his father, King Salman bin Abdulaziz al-Saud. This would be a radical departure from the Kingdomʹs tradition of power-sharing among princes within a highly decentralised system.

MbSʹs hardnosed political style also has international implications. For starters, he has taken an increasingly tough line against Iran and that countryʹs regional ambitions, thus exacerbating the Sunni-Shia divide. 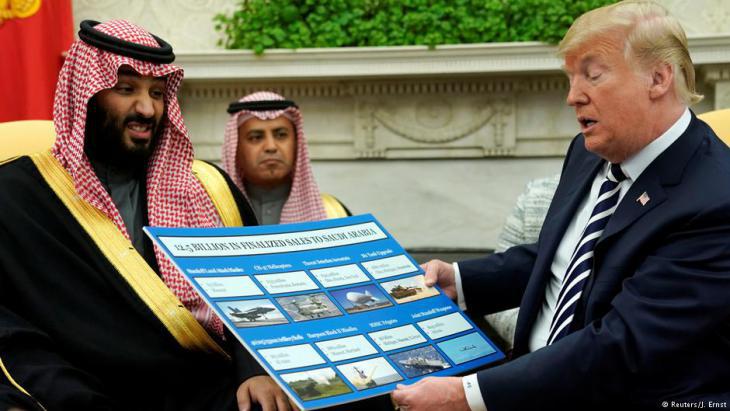 Arms deals a la carte: in March, the U.S. government approved more than a billion dollars of military aid for Saudi Arabia. Americaʹs Secretary of State gave the green light for the export of anti-tank missiles to the tune of 670 million dollars, a helicopter maintenance contract with a value of 106 million dollars and vehicle replacement parts totalling 300 million dollars

MbSʹs approach – which includes ill-informed statements comparing the Iranian regime to Nazi Germany – has the support of other Sunni countries such as Egypt and Jordan, not to mention U.S. President Donald Trump and Israeli Prime Minister Binyamin Netanyahu. But it hardly bodes well for the regionʹs stability.

Moreover, MbSʹs military intervention in Yemen has been a failure and his decision to impose an embargo on Qatar – a small but wealthy Gulf country that challenges Saudi hegemony – has backfired. Similarly, his attempt late last year to depose Lebanese Prime Minister Saad Hariri ended in a fiasco.

It is hard to say where Saudi Arabia may be heading. The country certainly needs comprehensive reforms. But the jury is still out on whether MbSʹs approach is the right one. If he succeeds, he will emerge with a reputation as a reformer. Yet he clearly is not interested in establishing representative institutions or strengthening the rule of law, so his country will have become a personal dictatorship.

Alternatively, MbSʹs authoritarian tendencies and embarrassing foreign-policy failures might provoke internal opposition, both from the traditional elites he has vowed to decimate, as well as from the sizeable Shia minority in the Kingdomʹs Eastern Province, whose members may look to Iran as a protector.

And, on the international front, MbSʹs escalation with Iran could spin out of his control. Despite its recent weapons purchases from the U.S., Saudi Arabia would still be outmatched in a military confrontation with Iran. If such a confrontation does take place, one must hope that it will not lead to a wider regional war.

Shlomo Avineri, Professor of Political Science at the Hebrew University of Jerusalem and a member of the Israel Academy of Sciences and Humanities, served as Director-General of Israelʹs foreign ministry under Prime Minister Yitzhak Rabin. His most recent book is Theodor Herzl and the Foundation of the Jewish State.

The Armenian diaspora in France – the largest in Western Europe – is urging the country to do more to support Yerevan in the Nagorno-Karabakh conflict. But Paris is, so far, ... END_OF_DOCUMENT_TOKEN_TO_BE_REPLACED

The country's mood was already weighed down by economic and social problems and military crises before the pandemic reached Iran. The regime's crisis management has done little to ... END_OF_DOCUMENT_TOKEN_TO_BE_REPLACED

Mohammad Reza Shajarian, the great singer of Persian music, has died at the age of 80. With his passing, the world has lost an outstanding talent and consummate artist. By Stefan ... END_OF_DOCUMENT_TOKEN_TO_BE_REPLACED

The Iran-Iraq War was one of the deadliest military conflicts ever seen in the Middle East. The eight-year-long conflict, which saw the use of chemical weapons, killed thousands ... END_OF_DOCUMENT_TOKEN_TO_BE_REPLACED

A new book offers a deep insight into Iran's state media apparatus. It gives a first-hand account of the debates around the how the system positions itself – and shows how a new ... END_OF_DOCUMENT_TOKEN_TO_BE_REPLACED

The execution of wrestler Navid Afkari triggered an international outcry, as well as protests against the Iranian justice system. At the same time, it has highlighted the ... END_OF_DOCUMENT_TOKEN_TO_BE_REPLACED
Author:
Shlomo Avineri
Date:
Mail:
Send via mail

END_OF_DOCUMENT_TOKEN_TO_BE_REPLACED
Social media
and networks
Subscribe to our
newsletter