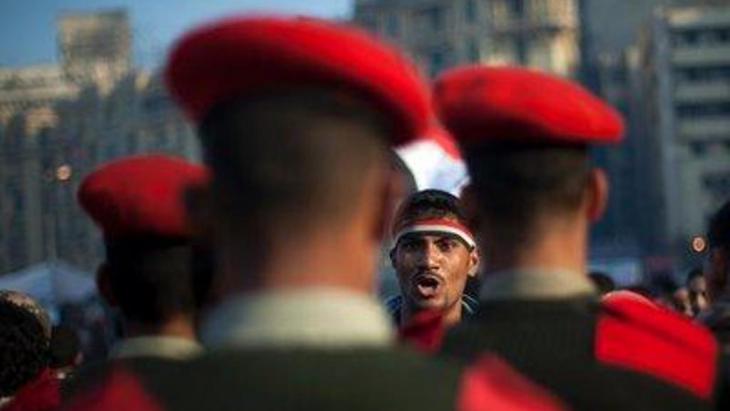 The Mubarak System without Mubarak

Mubarak may be gone, but the remaining elites will try to use his structural and political heritage to suit themselves, ensuring that Egypt's road to democracy will be a difficult and open-ended one. By Thomas Demmelhuber

​​The military has taken over in Egypt. All presidential powers have been transferred from the former president, Hosni Mubarak, to the highest military council, under the leadership of Defence Minister Tantawi. The military has promised to introduce radical democratic change and has fulfilled key demands of the protest movement by dissolving parliament, announcing new elections and establishing a commission to reform the constitution. Yet the question remains as to whether the military is really interested in democracy or whether the guiding force behind their actions is the safeguarding of their own economic interests and power? 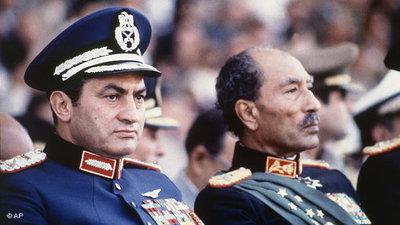 ​​The military as a neutral player

Over the 18 days of protests, the Egyptian military became a pivotal force in politics and the media, especially after the police failed to restore public order. The protest movement on the streets of Egypt saw the military as a partner in its demands for change and the end of Mubarak's presidency. Only a closer look at history can shed any light on why demonstrators believed that the military was a neutral player in the Egyptian power structure, in contrast to the hated police and security forces.

The military is the central source of power in Egypt. It toppled the monarchy installed by the British in 1952 and provided the country's first elected president, the "Free Officer" Gamal Abdel Nasser. His successors, Sadat and Mubarak, also derived a large part of their legitimacy from military achievements.

Muhammad Hussain Tantawi, a protégé of Mubarak, is head of the Supreme Council of the Military Forces, to which all presidential powers have been transferred

​The changing of the elites

In Egypt's complex ruling elite, the military is one of the central pillars of power and legitimacy. Nevertheless, the role of the Egyptian military has changed dramatically over the past few decades. While it played a prominent role in everyday politics under Nasser, this aspect has been reduced since the 1970s. Mubarak in particular went to some lengths during his long period in office to strengthen civilian elements in the power structure and eliminate possible threats to his rule (for example by firing the popular defence minister Abu Ghazala in 1989). In return, wide-ranging privileges for the military – or primarily the generals and the officers' corps – went untouched. To compensate for their decreased presence in daily politics, the Mubarak regime fostered wide-ranging activities for high-ranking military men in the private sector.

The Egyptian military has thus been a key economic factor since the 1980s, be it in the real estate sector, in the production of household appliances or subsidised bread, or the opening up of new tourist destinations on the Red Sea. According to estimates, the military's business activities make up 20 per cent of the country's annual economic output. The military will ultimately be the decisive element in the country's orderly transition. This "second coming" for the military is surprising, particularly after two decades of economic liberalisation, during which major private entrepreneurs have assumed an ever greater role in Egypt's ruling elite.

Through their good access to the core elites of the Mubarak regime, several businessmen have managed to establish market-dominating corporate empires, also exerting direct influence over policy by taking political mandates or offices. It was hard to escape the impression that this business oligarchy would soon replace the military on the Egyptian power pyramid. 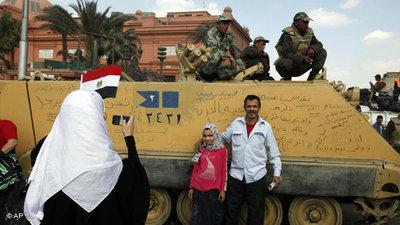 "Mubarak was replaceable. However, it is not yet clear what his departure means for the clientele system he headed," writes Thomas Demmelhuber

End of the oligarchs?

The business elite has never been a homogenous group; there were too many arguments between business families over influence, market sectors and access. What united them, however, was their common interest in a controlled liberalisation of the Egyptian economy, from which major private businesses in particular benefitted. The Mubarak regime attempted to act as a referee in recent years by pursuing isolated cases of corruption. This was a means to prove its claim to power via mechanisms of selective rule of law and to give the impression of independent jurisdiction to the rest of the world.

The gentle military putsch of 2011 only ostensibly implies a radical change in the country's elites. Businessmen such as the former steel baron and NDP functionary Ahmed Ezz, whose political capital enabled him, via murky business practices and credit fraud (particularly with state banks), to control the Egyptian steel market while accumulating a billion-dollar fortune, will no longer play a role in the future; Ezz has made too many enemies within the ruling elite over the past few years.

​​Other businessmen have played their cards much more cleverly during this phase of change. The billion-dollar Coptic Sawiris family was quick to place itself on the side of change. This was a logical consequence of a family strategy, in which the three Sawiris sons used investments in the media sector in recent years (such as the critical newspaper al-Masry al-Youm) to present themselves as a force for change, preparing themselves for all eventualities by withdrawing capital from the country and investing internationally.

For the time being, the obvious fusion of private business and political power through the assumption of political mandates and ministerial posts since 2004, accompanied by the prominent role of Mubarak's son Gamal, is history. Nevertheless – for macro-economic reasons alone – the business families that dominate the market will not be displaced. 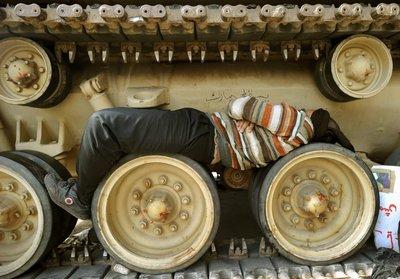 "This 'second coming' for the military is surprising, particularly after two decades of economic liberalisation, during which major private entrepreneurs have assumed an ever greater role in Egypt's ruling elite," writes Demmelhuber

The upheaval in Egypt will thus lead to a re-positioning of individual elite groups, but not to a complete marginalisation of elites in individual sectors. For the foreseeable future, the gap in policy-making will be filled by high-ranking military men and politicians emerging from the military who are ultimately pursuing very similar economic goals.

What remains is the main objective of the Egyptian military, namely to safeguard its privileged role in the country. This includes, firstly, retaining the annual military aid from the USA, which constitutes almost half of the country's military budget; secondly, protecting its profitable role in the Egyptian economy; and thirdly, swiftly transferring governmental responsibility to civilian hands.

The remaining issue is the form this civilian power structure will take. Mubarak was replaceable. However, it is not yet clear what his departure means for the clientele system he headed. The paradoxical aspect of the Mubarak regime is the fact that even without Mubarak, the regime itself is still inextricably interwoven with Egypt's political system. The autumn of the Middle East's aged dictators has indeed come. Yet in the medium term, the remaining authoritarian elites will continue to get the best out of the structural and political heritage for themselves, which means that Egypt's road to democracy will be a difficult and open-ended one.

Dr. Thomas Demmelhuber works at the Institute for Political Science at the University of Erlangen-Nuremberg. Translated from the German by Katy Derbyshire Editor: Aingeal Flanagan/Qantara.de

Qantara.deEgypt after MubarakThose Who Preach Democracy …The moment of truth has come for everyone in Egypt. While the country's major problems have not been solved by Mubarak's resignation, the revolution that began on Tahrir Square could mark the dawning of a new era. According to Rudolph Chimelli, however, the West must be more consistent in its support for the new democracy in the Middle East Hosni Mubarak's ResignationPharaoh KOWe are experiencing a key moment in world history, in the light of which the events in Tunisia – as vital as they were for the Egyptian revolution – seem like a mere overture, writes Stefan Weidner DossierUprisings in the Arab WorldThe anger of the Tunisians and the Egyptians towards the autocratic regimes in their countries has triggered an unprecedented revolt in several states in the Arab world. Our dossier provides an insight into the factors that led to the unrest and an overview of current developments

The Prophet Muhammad never executed anyone for apostasy, nor encouraged his followers to do so. Nor is criminalising sacrilege based on Islam’s main sacred text, the Koran. In ... END_OF_DOCUMENT_TOKEN_TO_BE_REPLACED

Archaeologists have uncovered the remains of an ancient city in the desert outside Luxor in Egypt. They say it dates back to the golden age of the Pharaohs more than 3,000 years ... END_OF_DOCUMENT_TOKEN_TO_BE_REPLACED

Surging coronavirus cases in many parts of the world have overshadowed the start of this year's Muslim holy month of Ramadan, with festivities once again curtailed by contagion ... END_OF_DOCUMENT_TOKEN_TO_BE_REPLACED

German Middle East analyst Guido Steinberg and television journalist Ulrich Tilgner have both published new books on the conflicts in the Middle East. Their analyses and their ... END_OF_DOCUMENT_TOKEN_TO_BE_REPLACED

Televised Turkish dramas are all the rage in the Middle East. A young Ottoman TV Empire has been expanding its soft power by harnessing regional dialects, Arabic names and viewers ... END_OF_DOCUMENT_TOKEN_TO_BE_REPLACED

Nawal El-Saadawi has died in Cairo at the age of 89. The prominent doctor, activist and author became internationally known for her outcry against female genital mutilation and ... END_OF_DOCUMENT_TOKEN_TO_BE_REPLACED
Author:
Thomas Demmelhuber
Date:
Mail:
Send via mail

END_OF_DOCUMENT_TOKEN_TO_BE_REPLACED
Social media
and networks
Subscribe to our
newsletter