Politics and Society in Oman
Outpost of the Arab World

The Sultanate of Oman will soon be celebrating "Forty Years of Renaissance". As a result of their seafaring, Oman's Muslims have created a tolerant society that is unique in the Arab world. Rainer Hermann reports from Muscat 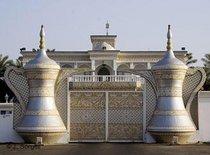 Oman's countless palaces, fortresses and residences – such as this house, the home of a minister at the Divan of the Royal Court of Oman near Muscat – bear witness to the affluence of the country and its civil population

​​This year, the Sultanate of Oman will celebrate "Forty Years of Renaissance". The event will mark the fortieth anniversary of the overthrow of Sultan Qaboos bin Said al Said's father on 23 July 1970. Before the overthrow, Oman was one of the world's most backward and isolated countries; a member of neither the United Nations nor the Arab League.

Sultan Qaboos moved swiftly to open up the country, which borders on the Indian Ocean, triggering what can only be described as a period of impressive development. The major celebrations are due to take place on 18 November, when Qaboos will turn 70.

When Qaboos overthrew his father, Said bin Taimur, with the help of the British civil administrator, there were only three boys' schools in Oman, a country the size of Poland. Moreover, the only tarred streets in the country were in the capital, Muscat. A year later, London granted independence to the Sultanate of Oman and other young states in the Gulf region. Today, all children of a school-going age attend one of Oman's 1,300 schools.

The sultanate, which has a population of just three million, is one of the most sparsely populated countries in the world. After the regime change, work began on a road network, a modern electricity grid, and a nationwide health service. 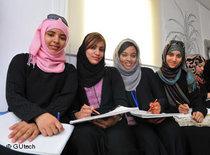 Education as the motor of national development and modernisation: students at the German University of Technology in Oman

​​Today, the people of Oman are proud of their country. "We have achieved much with our limited resources," explains one of the country's leading intellectuals. The average income per capita is higher than that of the Czech Republic and Saudi Arabia, even though Oman only produces 850,000 barrels of crude oil a day, just one per cent of the world's total oil output.

Nevertheless, the same intellectual is willing to admit that when compared with its neighbour the United Arab Emirates, Oman might have missed a few opportunities. On the other hand, he points out that development in Oman has been sustainable and steady. The most recent financial crisis hardly hit the country at all; Oman's banks had invested in very few risky portfolios.

The Sultan is a keen champion of education. In 2010, 12 per cent of the state budget has once again been earmarked for education. The reason for this is that 55 percent of the Omani community, which makes up three-quarters of the population, are aged 18 and under. First they need schools, then jobs. Germany's state-owned GTZ (Company for Technical Cooperation) advises the Omani government on the "omanicisation" of the country's economy and develops programmes that seek to prepare young people for the world of work.

Influence from the Indian subcontinent and East Africa 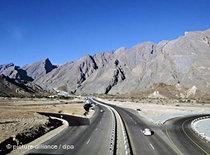 "We have achieved much with our limited resources" – the sultanate has a road network, a modern electricity grid, and a nationwide health service

​​Oman is at the edge of the Arab world, borders on the Indian Ocean, and is heavily influenced by the culture of the Indian subcontinent and East Africa. It is separated from Arabia by the huge inner-Arab desert, Rub' al Khali ("the Empty Quarter"). Significant as the caravans leading north were for Oman, its maritime trade with India and Zanzibar was always even more important. This explains why the dynasty of the Sultans of Zanzibar, which was only toppled in 1964, originated in Oman.

As a result of their seafaring, Oman's Muslims have created a tolerant society that is unique in the Arab world. Indian traders of the Hindu faith settled in the Omani capital, Muscat, and became Omani citizens.

In Muscat, a Hindu temple and 28 Christian churches are open to the faithful from Kerala in southern India and the West. Sometimes the Sultan will provide land for a church, sometimes he will donate a new organ to a church. The aim is that everyone should be able to practice his/her religion without restrictions.

But Oman is a model country in more ways than religious tolerance. Sultan Qaboos has three women ministers in his cabinet and Oman's ambassadors to Germany and the United States are both women. Oman was the first Arab state to set up a Ministry for the Environment, and once every two years, UNESCO presents an environmental award that is funded by Sultan Qaboos. The prevention of the extinction of the Arabian Oryx is a subject close to his heart. 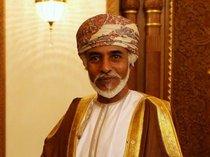 A progressive attitude towards women: Sultan Qaboos has three women ministers in his cabinet and Oman's ambassadors to Germany and the United States are both women

​​Sultan Qaboos was the first ruler on the Arabian Peninsula to support western classical music. In 1986, he founded the Royal Omani Symphony Orchestra, which is only open to young Omanis trained at the conservatory in Muscat.

Qaboos was heavily influenced by the six years he spent in Europe from 1958 to 1964. He trained at the British military academy in Sandhurst and was subsequently stationed in the Rhine Army in Germany, where he learned to love the music of Europe. One of the high points of the celebrations on 18 November will be the opening of the Royal Opera House in Muscat, which will house the largest organ in the Arab world.

According to the constitution of 1996, Oman is an absolute monarchy. Sultan Qaboos also holds the post of prime minister, minister of defence, minister of finance and minister for foreign affairs. Nevertheless, the Omanis feel that the people do have a voice.

Both chambers have an exclusively consultative role as the sultan rules by decree. Educated Omanis expect that the absolute monarchy will one day be replaced by a constitutional monarchy and that the people will be able to elect their prime minister. One of the unresolved questions facing the country is that of the sultan's successor.

Qaboos is not married and has neither children nor a brother. It is said that he has written the names of two members of the Bu Said dynasty whom he considers to be suitable successors in a sealed envelope.

Friends with all neighbours

While the Sultanate of Oman is the most easterly country in the Arab world, in terms of foreign policy, it is the most closely linked to the West. The United States and the United Kingdom both have fighter planes and naval vessels in Oman, although they do not actually have any military bases.

Unlike in most Arab states, Omani citizens are not forbidden to travel to Israel. Nevertheless, the sultanate does maintain close ties with Iran, which is only 50 kilometres away across the Strait of Hormuz. The sultan visited Iran only last year.

Educated Omanis do not consider Iran to be a threat; they also say that Oman considers all neighbours to be its friends. After all, they say, the states of the Arabian Peninsula did not call on the Americans in response to a threat from Iran, but in response to a threat from other Arab states. Despite being an outpost of the Arab world, Oman remains a special case in the region in terms of both its domestic tolerance and its tolerance in foreign policy matters.

Education in the Gulf
Knowledge instead of Oil
The Arab Gulf states have discovered education as the raw material of the future. In order to quickly move ahead, they are importing universities from the west. There is still room for many more students – even those from abroad. A report by Arnfrid Schenk

END_OF_DOCUMENT_TOKEN_TO_BE_REPLACED
Social media
and networks
Subscribe to our
newsletter