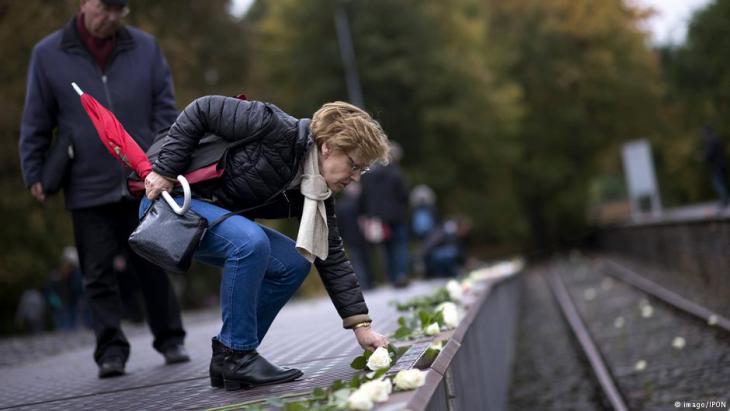 Politics of remembrance
Cracks in the edifice?

Are those who remember past atrocities protected from committing the same mistakes? Germany has spent over 40 years addressing its past, yet even there recent events on the global stage have seen populist prejudices enter mainstream debate. By Sonja Hegasy

Germany likes to see itself as the world's leading exporter of a politics of remembrance that has overcome no less than two German dictatorships. In the editorial of one edition of its magazine Art&Thought in 2013, the Goethe-Institut wrote that Germans are recommending the process through which they have come to terms with their past 'as a peculiarly German export'.

It took quite some time – namely until the end of the 1960s – for the process of re-examining the horrors of National Socialism to begin. Since then, however, most of German post-war society has in academia, culture and politics re-appraised the rise of fascism, the devaluation of human life and the Holocaust, even if to this day it faces violent resistance in the process. Nevertheless, at international level, Germany is often held up as an example of how to deal with past crimes and how to make the transition from dictatorship to democracy.

For many ′the gold standard′

Many consider Germany to be a 'model pupil' as regards coming to terms with genocide and mass murder. The renowned US ethnologist Susan Slyomovics, author of the book ″How to Accept German Reparations″, speaks of the many forms Germany's politics of remembrance takes and calls them the gold standard for coming to terms with the past.

It was only after the German rupture in civilisation during the Nazi era, the industrial-scale murder of neighbours and fellow citizens, that remembrance was put front and centre in the process of coming to terms with the past. The oft repeated foundation on which this politics of remembrance is built is that 'those who cannot remember the past are condemned to repeat it'. Rare are the opening ceremonies of memorials, academic publications on this subject, or days of remembrance that do not feature this quote. 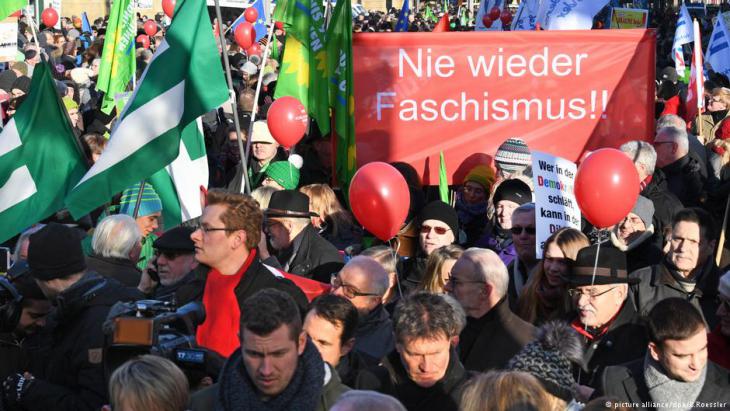 Still the majority view: ″we Germans in particular know the human suffering that underlies every refugee's story because we experienced it ourselves and were responsible for others experiencing it too. This results in a particular historical and humanitarian responsibility towards refugees. I am delighted about the willingness to help, which is based on a broad societal consensus in Germany,″ comments Interior Minister Thomas de Maiziere

But does that in turn mean that those who remember the past are not condemned to repeat it? If it does, after over 40 years of its society addressing and coming to terms with its past, Germany must be the ideal place to test the veracity of this dictum. So does the process of societal remembrance mean that pogroms will never again occur in Germany?

Given the march of aggressive right-wing populists through the institutions, many people with a migrant background are asking themselves this very question. What guarantees do they have that there will be no repetition of past events? Or are they just particularly thin-skinned because they too recall Germany's past? Last year alone, 560 refugees, including 43 children, were injured in attacks. A total of 217 attacks on helpers and support organisations were reported. Shelters for asylum seekers have been targeted across the country.

Drawing a veil over the past?

Using remembrance of past injustice as a means of reconciliation is an astonishingly new concept. It was only in the late 1990s – under the guise of transitional justice – that it became an explicit way of re-examining past crimes. Until then and down through European history, forgetting was the method of choice for drawing a line under conflicts between hostile groups, as illustrated by the historian Christian Meier in his book ″The Imperative to Forget and the Indictability of Remembering; Public dealing with an oppressive past″.

Although the main people responsible have in the past been named and sometimes even held to account, in almost all cases, past injustice was not persecuted in order to allow society to find a way to peaceful co-existence. Taking the examples of the Edict of Nantes in 1598, the Peace of Westphalia in 1648, or the treaties (Sevres and Lausanne) relating to the East post-1918, Meier shows that in both the Middle Ages and in modern times, forgetting was seen as a way of restoring social cohesion.

The Second World War not only cost 56 million people their lives, it also saw forced displacement and mass migration on an unprecedented scale. Do those who help refugees, victims of war and displacement, do so because they know how Germany dragged first its own society and then the whole world into the abyss in the years following 1933? 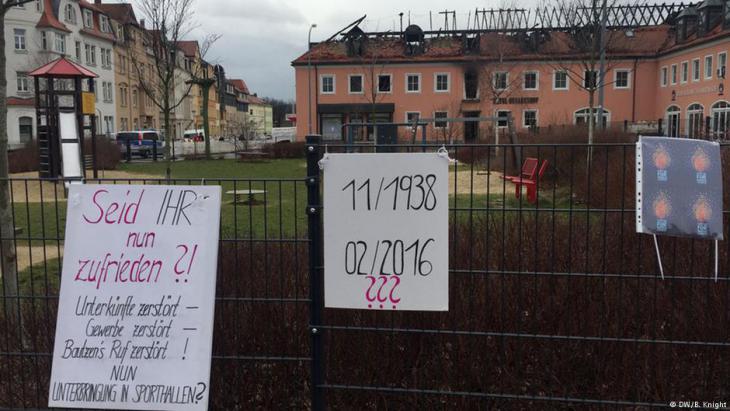 An eerie reminder: "many people with a migrant background are asking what guarantees do they have that there will be no repetition of past events? Last year alone, 560 refugees, including 43 children, were injured in attacks. A total of 217 attacks on helpers and support organisations were reported. Shelters for asylum seekers have been targeted across the country," writes Hegasy

When you speak to people who have fled to Germany, some say that they are convinced that many Germans volunteer to help refugees, among other things because they recall the crimes committed under National Socialism. Some academics who have fled Turkey feel that such people help because they recall the brain drain that took place in the 1930s and 40s.

No room for complacency

On World Refugee Day 2014, Federal Interior Minister Dr. Thomas de Maiziere said: ″We Germans in particular know the human suffering that underlies every refugee's story because we experienced it ourselves and were responsible for others experiencing it too. This results in a particular historical and humanitarian responsibility towards refugees. I am delighted about the willingness to help, which is based on a broad societal consensus in Germany.″

The Berlin-based Iranian journalist Mahdis Amiri has seen how both groups in Germany – those who welcome refugees and those who want to 'stem the tide' – use experiences of the Second World War to back up their arguments. In the case of the latter, such arguments take the form of phrases like 'No one gave us anything for free either!' and 'We were displaced too!' In the case of the war in Syria, these people are engaging in a new kind of war revisionism. Are cracks appearing on the shiny surface of Germany's world-famous politics of remembrance?

I hope that the sentence quoted at the start of this article about the causality between remembrance and prevention will prove right. As we can see today, there are no guarantees that it will, despite all that has been achieved in Germany in terms of coming to terms with the past. Perhaps we have viewed history as an adequate means of violence prevention for too long.

Sonja Hegasy is Vice Director and Head of External Relations at the Leibniz-Zentrum Moderner Orient.

Home
Print
Newsletter
More on this topic
The refugee debate: What makes us German?Europe, Germany and ″Abendland″ angst: In the name of ChristendomThe rise of right-wing populism in Europe: A continent divided
Related Topics
'Islamic State' | IS, AfD | Alternative for Germany, Human rights, Immigration, International terrorism, Islam in Europe, Islamophobia, Migration, Migration in Germany, Muslims in the West, Pegida, Policy on refugees and migration, Right-wing populism
All Topics

Award-winning poet Dincer Gucyeter’s debut novel is a tour de force through the German reality he experienced as an artist and son of Turkish immigrants, written with an unsparing ... END_OF_DOCUMENT_TOKEN_TO_BE_REPLACED

Sudanese protesters have been calling for the removal of German diplomat Volker Perthes from the UN mission to the country. Despite the fractious nature of post-dictatorship ... END_OF_DOCUMENT_TOKEN_TO_BE_REPLACED

We are in favour of human rights. But One Love armbands are self-righteous and ignore some fundamental issues. Stefan Buchen examines the debate surrounding the World Cup in Qatar END_OF_DOCUMENT_TOKEN_TO_BE_REPLACED

Education for girls and women is still possible in Afghanistan, says Reinhard Eroes of the Kinderhilfe Afghanistan initiative. In interview with Elisa Rheinheimer, he talks about ... END_OF_DOCUMENT_TOKEN_TO_BE_REPLACED

In Doha, Arabs from Morocco, Tunisia, Egypt and Algeria are gathering to celebrate the first ever FIFA World Cup to be held on Arab soil. The criticism from Europe? Over the top, ... END_OF_DOCUMENT_TOKEN_TO_BE_REPLACED

Canan Topcu came from Turkey to Germany as a child. In her essay, she describes how bothered she was by the racism she encountered in her country of origin when she travelled ... END_OF_DOCUMENT_TOKEN_TO_BE_REPLACED
Author:
Sonja Hegasy
Date:
Mail:
Send via mail

END_OF_DOCUMENT_TOKEN_TO_BE_REPLACED
Social media
and networks
Subscribe to our
newsletter