The popular uprisings in the Arab world have spawned a whole new line-up of musicians who clearly denounce the political and social inequities in their countries. Yet, this protest culture is not a completely new phenomena, as Arian Fariborz reports 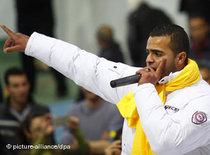 Anger suppressed for decades: Tunisia's rap star Hamada Ben Amor is condemning the misery, corruption, and nepotism among the political elite in his country

​​ Over the past days and weeks of the "Arab Spring", many political observers in the West have been rubbing their eyes in astonishment at the fury and intensity of the popular uprisings in the Arab world. This has served to spotlight how little acknowledgement in the West has been given to the deep-seated dissatisfaction felt by Arab civil society.

This is also and particularly true for the younger generation, which has so vehemently rebelled against the suppression of free speech and artistic freedom as well as against the social hardships and the lack of job opportunities in their countries. And this didn't just come about yesterday.

"We were brain dead"

Today, young people make up the majority of the population in the Arab states. In Egypt, for instance, they have been the main victims of "Mubarak's wars against his own people" for decades, says the Egyptian sociologist Saad Edin Ibrahim. They are the victims of state emergency laws, media censorship, torture by the police, and subject to arbitrary judicial rulings. The anger of a youth suppressed for decades has finally brought the pot to a boil.

Karim Kandeel, the front man and guitarist of the punk band "Brain Candy" from Cairo, is one of those desperate youths who have suffered too long under Mubarak's regime. "We were brain dead and would have perished – slowly but surely," says the 23-year-old musician reflecting on the oppressiveness of Egyptian cultural policy under Mubarak.

​​ "Half of our songs deal with all of the negative experiences we have had to live through in the past few years, from frustration to the feeling of being constantly imprisoned." They were imprisoned in Mubarak's system without the opportunity to perform their music before a larger public, because their rebellious sounds scandalized the political leadership on the Nile and might have also offended religious sensibilities. Yet, new hope has arisen with the unexpected and rapid fall of the pharaoh. "We really didn't believe that this could ever happen. For the first time in half an eternity, we are finally breathing the air of freedom."

A number of non-conformist rock and pop musicians have experienced, similar to Kandeel, decades of suppression and harassment. Many streamed to Tahrir Square in Cairo during the 18 days of protest in order to express their dissatisfaction with the regime. Bringing along their tablas, tambourines, guitars, and flutes, they provided loud support for the anti-Mubarak choir of demonstrators in the central square of liberation.

Beginning of a new era

Yet, this wasn't all. The heavy burden of the past decades was suddenly lifted from the shoulders of musicians, especially young bands, who felt encouraged by the political earthquake and for the first time went public with protest songs against the regime.

​​ Hip-Hop bands, such as the "Arabian Knightz" from Cairo with their song "Not your prisoner", began to depict the brutality of the Egyptian police in their attempt to suppress the revolt. As the protest against Mubarak reached its highpoint, the rap group Crew called out in Arabic and English for the overthrow of the regime in their song "Rebel!". In the words of the Cairo Hip-Hop trio, this is an "emotionally uplifting song that expresses the heart, courage, and spirit of the Egyptian people engaged in a revolution against an oppressive regime".

And then there are the rappers from "The Narcicyst"" (featuring Amir Sulaiman, Ayah, Freeway, and Omar Offendum), who, in the style of their American role models, take stock of the bloody course of the revolution in their music video "25th of January", the beginning of the revolt against Mubarak.

The times when non-conformist rock and pop musicians in Egypt, such as heavy metal musicians in Cairo, were shadowed by secret police, incarcerated, tortured, and publically denounced as Satanists and junkies, now appear to finally have come to an end.

Musical protest in the Maghreb

Yet, while Egypt's isolated underground musicians and bands never really publically articulated their protest until the uprising out of fear of the Mubarak regime, developments in the neighbouring Maghreb states were completely different.

In Algeria – and most recently also in Tunisia – a politically aware generation of young musicians could establish themselves, and through rap music and with the help of a microphone, they could stridently condemn the misery, corruption, and nepotism among the political elite so prevalent in their country. In Tunisia, for instance, the rapper Hamada Ben Amor (also known as El Général), released his protest song "Mr President, your people are dying" during the country's "Jasmine revolution". The Tunisian youth were thrilled and the song at once became the hymn of the revolution. 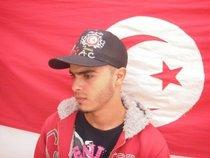 His protest song "Mr President, your people are dying" became the hymn of the Tunisia's "Jasmine Revolution": Hamada Ben Amor, aka 'El Général'

​​ In the song, the 22-year-old Hip-Hopper from the Tunisian port city of Sfax sharply criticises the flagrant waste and self-enrichment by the family of former President Ben Ali and his entourage, while the rest of the country is mired in poverty. El Général quickly attained popularity among many young Tunisians with similar views via Facebook, YouTube, and Twitter. The response was so great that on 6 January, the Tunisian secret police took him to their headquarters for interrogation.

The Tunisian rapper Balti, alias Dragonbalti, is also regarded as an icon within the Hip-Hop subculture on account of his socially critical lyrics. The guardians of virtue in Ben Ali's police state also long regarded him as a thorn in their side.

Without a doubt, the strongest role model for Tunisian rappers was the long-established Hip-Hop culture in Algeria, from where, by the end of the 1990s, the virus spread to the whole of the Arab world. Algeria is regarded as the cradle of Arab Hip-Hop. Towards the late 1990s, Rap music took over from Rai Pop in popularity among young people and developed during the "black decade", as the Algerians refer to the many years of civil war in their country, into a political instrument for the socially disenfranchised and precariously living youths in the poor districts of the large cities of Algiers, Annaba, and Oran.

More than ever before, Hip-Hop corresponds to the attitudes of Algerian youth, who now rebel against the Bouteflika regime, writes Fariborz: youth protests in Bab el Oued, a suburb of Algiers

​​ More than ever before, Hip-Hop corresponds to the attitudes of Algerian youth, who now rebel against the Bouteflika regime. This is because living conditions have failed to improve even years after the end of the civil war. The Algerian rentier state, with its rich natural resources and its large profits from oil and gas sales, has primarily benefited a tiny economic and political elite. The vast majority of the population has come away empty-handed, especially the Algerian youth.

And social plight of young people continues. They now threaten to explode in protest and bring down the ancien régime in Algeria as well. At the time of the bread riots in 1988, young people demonstrated against the dictatorship of the FLN and the single-party state under Chadli Bendjedid. Even then, the poor working district of Bab El-Oued was considered to be the centre of resistance. It was also in Bab El-Oued of the 1990s that an energetic, politicised Hip-Hop movement began to form for the first time in the Arab world.

Today, the demonstrating young people from Bab El-Oued are once again in the world's eye, and just as 20 years ago, stand with a microphone or a stone in their hands to protest against the same social plight. Nothing has changed. Even today, the words to "Monsieur le Président", the old cult song by "Le Micro Brise Le silence" (MBS), the pioneers of the Algerian Hip-Hop scene, ring true in their lament on the continuing "Algerian tragedy".

Tunisian Rapper Balti
"I Was No Good in School"
Not only in Morocco and Algeria, but in Tunisia as well, a young music scene has established itself in recent years that draws on global forms of expression such as Hip-Hop and Rap. Tunisia's most successful rapper is 30-year-old Balti. Martina Sabra spoke with him

Dossier
Uprisings in th Arab World
The anger of the Tunisians and the Egyptians towards the autocratic regimes in their countries has triggered an unprecedented revolt in several states in the Arab world. Our dossier provides an insight into the factors that led to the unrest and an overview of current developments

END_OF_DOCUMENT_TOKEN_TO_BE_REPLACED
Social media
and networks
Subscribe to our
newsletter