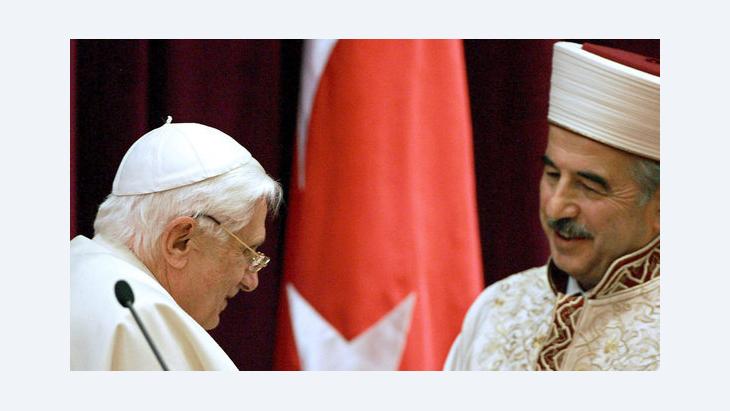 Pope Benedict XVI was only just in the process of becoming a Pope. He will be remembered by the Turks as someone who got lost in this process. How Turkish Muslims viewed Benedict XVI. By Kerim Balci

﻿﻿The Turks often view global events from the perspective of their own domestic politics. In Turkey, the unexpected abdication of Pope Benedict XVI was compared with the recent resignations of politicians forced to step down from office because of incriminating videos. It is alleged that in the case of the Pope, it was an unknown video – which in all probability does not even exist – that triggered his decision. "He was forced to accept the post and forced to step down" – is the prevailing Turkish view of the voluntary resignation of the Pope.

The clandestine Vatican, power struggles in the vaults of St. Peter's and the poor elected Pope, without allies and without power – the Turks' perception of a conspiratorial Vatican is older than that of their own corrupt state. During the Pope's visit to Turkey in late 2006, seen as an act of reconciliation following his controversial Regensburg address, Turkish bookshops displayed badly written attempts to emulate the work of Dan Brown. One of them is the work of a certain Yücel Kaya and bears the title: "Who Will Kill the Pope in Istanbul?"

Never fitted the same mould as his predecessor

Kaya probably had little appreciation of the potential explosiveness of such an issue. The attempt to assassinate Pope John Paul II in the year 1981 by Turkish ultranationalist Mehmet Ali Agca was seen as the revelation of what is known as the Third Secret of Fátima. The prophecy of three shepherd children from the Portuguese town dates from the early 20th century and was long kept secret by the Vatican. It was eventually made public in the year 2000 by Joseph Ratzinger, among others.

Following Ratzinger's advice, John Paul II. used the "Third Secret" as a confirmation of himself as God's chosen Pope, serving the Church until his death when God willed it. It was alleged that this was a tactical move intended to cancel out the arguments of those demanding the resignation of the Pope due to old age. Using the prophecy to consolidate the papal contract was either the clever idea of his future successor Ratzinger, or of the Pope himself. 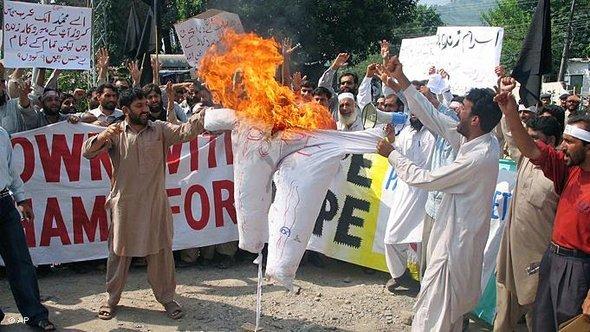 Infringing upon the sensitivity of the Muslim world: Pope Benedict's Regensburg lecture received much attention from political and religious authorities. Many Islamic politicians and religious leaders registered their protest against what they said was an insulting mischaracterization of Islam. Pictured: Pakistani Kashmiri protesters burn an effigy of Pope Benedict XVI on 18 September 2006

​​At least in the eyes of the average Turk, Pope Benedict XVI never fitted the same mould as his predecessor. In contrast to John Paul II Benedict XVI again wore the traditional red papal slippers. This did nothing to change the fact that for Turkey, the Pope still had a Polish face. An image that has been indelibly etched on the collective memory of the Turks.

The lapse of Regensburg

He never managed to free himself from the persona of the German theologian Dr. Joseph Ratzinger. This is exemplified by the charitable organisation "Joseph Ratzinger Pope Benedict XVI Foundation", set up by his students. While most of its income is derived from the sale of the papal writings of Benedict XVI, the foundation's declared goal is "to promote theology in the spirit of Joseph Ratzinger".

This "spirit of Joseph Ratzinger" haunted the Pope during his speech at the University of Regensburg in September 2006, when he infringed upon the sensitivity of the Muslim world with the apparently unintentional accusation that Islam is a religion that has not contributed to the advance of human civilisation. 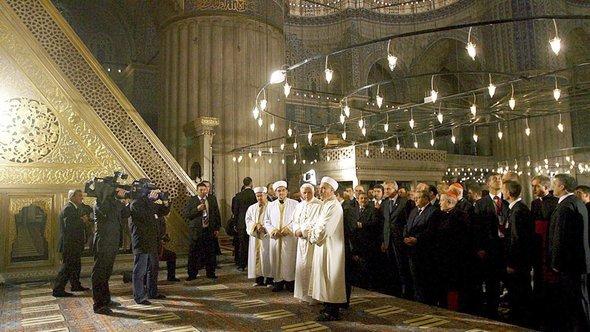 Drawing a painful lesson: In order to undo the damage inflicted by his Regensburg speech, Benedict XVI travelled to Istanbul where he met Muslims for silent prayers at the Blue Mosque, his face aligned in the direction of Mecca. "Just as his critical comments had done before, this gesture also had a far-reaching impact," Kerim Balci writes

​​In order to undo the damage inflicted by Ratzinger's reference to comments made by the Byzantine Emperor Manuel II Palaiologos, Benedict XVI travelled to Istanbul where he met – the Hagia Sophia as a potential location for prayers – urban Muslims for silent prayers at the Blue Mosque, his face aligned in the direction of Mecca. Just as his critical comments had done before, this gesture also had a far-reaching impact.

For the Turks ascribed a particular significance to this shared prayer session: Even though the Pope had not been entirely "forgiven" for the Regensburg lecture, many gained the impression that he had drawn a painful lesson from his error and was now ready to reset exchange between the Catholic and Muslim world.

They were not far wrong with this assessment. Benedict XVI paid a visit to the Directorate of Religious Affairs, an unprecedented event in the history of Turkey. The directorate decided to take part in the summit of the Catholic-Muslim Forum, which convened at the Vatican for the first time in 2008.

Catholic-Muslim bonds put to the test

The durability of Catholic-Muslim bonds was put to the test on further occasions during Benedict's papacy: once by the murder of the Catholic priest Andrea Santoro in Trabzon in 2006; and again in 2010 by the murder of Bishop Luigi Padovese, the Pope's apostolic vicar in Anatolia. The Vatican did not criticise the Turkish government or Turkish Islam following these attacks. In actual fact, the families of the murdered men devoted the pain of their loss into opening up new channels of interfaith dialogue. 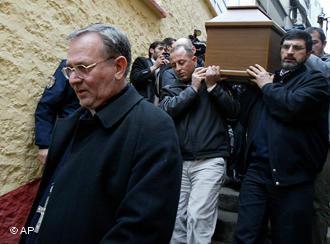 From the pain of loss to opening up new channels of interfaith dialogue: In 2006, the Catholic priest Andrea Santoro was murdered in the Black Sea city of Trabzon, Turkey. Four years later, the catholic priest Luigi Padovese, left, vicar apostolic of Anatolia in Turkey, was also murdered

​​But in the end, Benedict XVI's Muslim interlocutors appeared to be more interested in interfaith dialogue than could be said of the Pope himself. While John Paul II had to wait two decades for a response from the Muslim world to the "Nostra Aetate" declaration of 1964 regarding interfaith exchange, Benedict XVI tried to do justice to a network of Muslims in leading positions from the entire Muslim world willing to enter into dialogue.

This is how the Catholic-Muslim Forum was founded, in response to an open letter from 138 Muslim theologians calling for peace and cooperation between the Catholic Church and the Muslim world. It was a dialogue long advocated not only by the Directorate of Religious Affairs, but also important religious organisations such as the Gülen movement.

No one attempted to kill the Pope in Istanbul. But if you bear in mind the Turks' susceptibility to conspiracy theories, it would not come as a surprise to see bestselling books on the shelves of Turkish bookshops with titles such as: "Who Forced the Pope's Resignation in Rome?"

Kerim Balci is an author and Editor-in-Chief of the magazine "Turkish Review".

Home
Print
Newsletter
More on this topic
Statement on Islam and Reason: The Mistakes of the Pope and the Mistakes of the MuslimsArab Reactions to the Pope's Visit: Signs of HopeCatholic-Islamic Dialogue: Interview with Christian Troll: For Freedom of Faith
Related Topics
Dialogue of Cultures | Intercultural Dialogue, Dialogue of Religions, European Islam, Islam and the West
All Topics

Recep Tayyip Erdogan, disappointed by the European Union’s reluctance to integrate Turkey into its ranks, has re-directed his country’s diplomacy toward the Maghreb and Africa to ... END_OF_DOCUMENT_TOKEN_TO_BE_REPLACED

Philosopher Juergen Habermas was due to be awarded a major Arab prize in Abu Dhabi, but has turned it down following criticism. This decision torpedoes Arab efforts at a ... END_OF_DOCUMENT_TOKEN_TO_BE_REPLACED

Although a unity government was formed in Libya in March 2021, tensions and possible crises between the political actors are already emerging. What problems does the country face ... END_OF_DOCUMENT_TOKEN_TO_BE_REPLACED

Among Muslims, the image of women as "cossetted hijab-wearing princesses" is frequently invoked. But Muslim women have long wanted to be more. In her essay, Karoline Roscher- ... END_OF_DOCUMENT_TOKEN_TO_BE_REPLACED

Even in times of war and pandemic, refugees are still being deported to Afghanistan. Several deportation flights have taken place in recent weeks alone. Since those affected often ... END_OF_DOCUMENT_TOKEN_TO_BE_REPLACED

Surging coronavirus cases in many parts of the world have overshadowed the start of this year's Muslim holy month of Ramadan, with festivities once again curtailed by contagion ... END_OF_DOCUMENT_TOKEN_TO_BE_REPLACED
Author:
Kerim Balci
Date:
Mail:
Send via mail

END_OF_DOCUMENT_TOKEN_TO_BE_REPLACED
Social media
and networks
Subscribe to our
newsletter