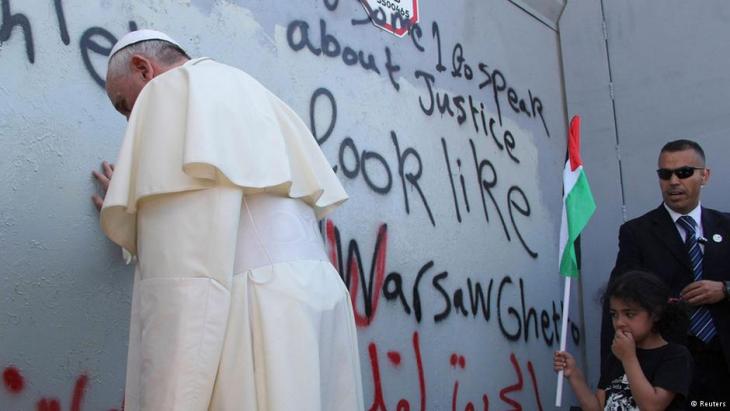 Pope Francis in the Middle East
Gestures laden with symbolism

The visit of Pope Francis to the Israeli-occupied West Bank has lifted the spirits of Christians across the region. The Pope expressed his solidarity with the Palestinian people through actions rather than words: not only did he fly directly to the West Bank from Jordan instead of stopping in Tel Aviv first, he also prayed at the Israeli separation wall. By Kate Shuttleworth

Pope Francis arrived on Sunday, 25 May 2014 in Bethlehem, which is revered as the birthplace of Jesus, in a Jordanian military helicopter. Instead of travelling first to Tel Aviv, he had, unusually, chosen to fly straight to the West Bank from Jordan. Cheering crowds welcomed him by waving Palestinian flags and releasing doves into the air.

However, the charged political environment was also expressed in large banners draped from the buildings around Manger Square and down the side of the Church of the Nativity. These juxtaposed biblical scenes with depictions of Palestinian men at Israeli checkpoints and women standing amid the rubble of their demolished homes.

Pope Francis' first engagement was a meeting with Palestinian President Mahmoud Abbas and Palestinian officials at the presidential place in Bethlehem. The Pope gave a speech in which he called for concerted efforts to reach a peace agreement.

"I wish to state my heartfelt conviction that the time has come to put an end to this situation, which has become increasingly unacceptable," he said. "For the good of all, there is a need to intensify efforts and initiatives aimed at creating the conditions for a stable peace, based on justice, on the recognition of the rights of every individual and on mutual security."

He urged both Israel and Palestine to refrain from actions that contradicted their stated desire to reach an agreement, and instead to pursue a peace agreement with "tireless determination and tenacity", even if this meant making sacrifices. 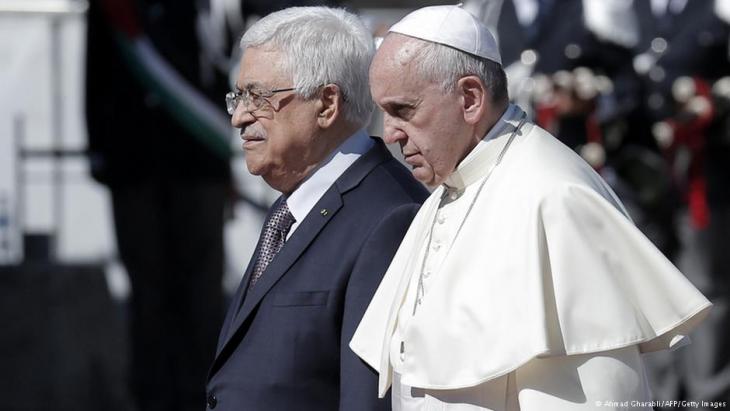 In an interesting and most surprising development, Pope Francis invited Palestinian President Mahmoud Abbas (pictured here on the left) and his Israeli counterpart, Shimon Peres, to visit him in the Vatican and pray together for peace. The offices of both presidents promptly accepted the invitation

President Mahmoud Abbas, however, stressed the Palestinians' many grievances against Israel, especially continued settlement construction in the West Bank, and asserted that Israel was driving Christians and Muslims out of Jerusalem.

Pope Francis then proceeded to Manger Square, where he was due to celebrate an open-air Mass. His route took him right along the Israeli separation wall, which blocks the old Jerusalem-Hebron road and runs around the Tomb of Rachel – a sacred site for Christians, Jews and Muslims – annexing it to the Israeli side.

As he drove past the wall in his special open-topped jeep, the Pope made an unscheduled stop. He stepped out of his vehicle and walked over to the wall, near to where someone had sprayed the words "Free Palestine". In a gesture laden with symbolism, he prayed here in silence for several minutes before pressing his forehead to the wall, crossing himself and continuing on his way.

Pope Francis was then welcomed to the grotto in the Church of the Nativity, the traditional birthplace of Jesus, before celebrating Mass in front of a crowd of some 10,000 people. The worshippers included Palestinian Christians from the Palestinian territories and Israel as well as immigrants from Africa and Asia.

His sermon focused on children's issues. He spoke of those who live in exile and in inhumane conditions – for example as refugees – and emphasised the need to protect minors, especially those in danger of being forced into becoming child soldiers.

In a surprise move, he then invited the Palestinian president and his Israeli counterpart, Shimon Peres, to visit him in the Vatican and pray together for peace. The offices of both presidents quickly accepted the invitation.

Roni Dsouza, 30, was one of the many who attended the Mass. A Roman Catholic, he is originally from Mumbai but now lives in Jerusalem. "We feel lucky to get the chance to see the Pope today," said Roni, waving both the Indian and the Palestinian flags. "His message of peace is important; there are many issues to be resolved." 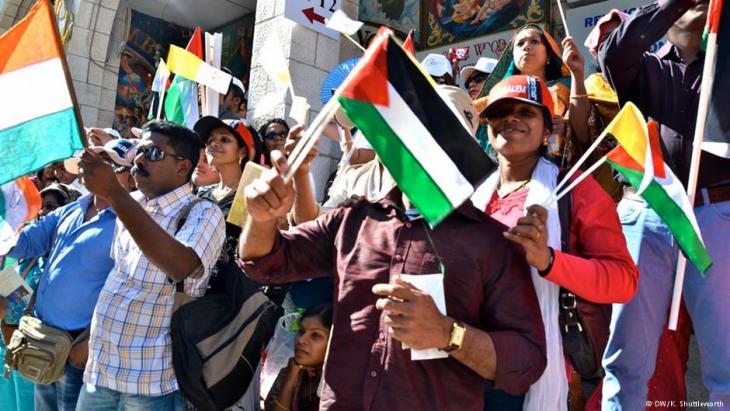 Pope Francis' visit comes just weeks after peace talks between Israel and the Palestinians broke down. The pontiff said: "I wish to state my heartfelt conviction that the time has come to put an end to this situation, which has become increasingly unacceptable. For the good of all, there is a need to intensify efforts and initiatives aimed at creating the conditions for a stable peace, based on justice, on the recognition of the rights of every individual and on mutual security."

For 62-year-old Elias Michael, who runs a shop in Manger Square, this was the fourth time he had seen a pope visit Bethlehem. "The first time I remember was in 1964," he says. "This time is different: security is high. We hope he will do something for the peace, inshallah. The Palestinians have been suffering since 1948."

The Pope then had lunch with five Palestinian families at Casa Nova, a traditional Palestinian guesthouse run by Franciscan missionaries.

The families were selected to represent the various difficulties of Palestinian life in the region. One family, from the Beit Jala area near Bethlehem, will no longer be able to access its land if Israel's separation wall is built as planned.

Another man lives in Jerusalem. Although he is married, Israeli law does not permit his wife to reside permanently in the city. A different family has one son in prison, while another is in exile in Gaza.

Shadia and George Sbait represented the Palestinian Christians from the villages of Iqrit and Kafr Biri'm in the Galilee region, who were displaced in 1948. The villagers were told by the Israeli army that military exercises were being carried out there, and that they could return in two weeks. Instead, their homes were destroyed, and successive Israeli governments have ignored its own Supreme Court's ruling that the villagers should be compensated and allowed to return.

Shadia Sbait hopes that meeting the Pope might advance their cause. "We've been trying to reach Prime Minister Netanyahu for so many years, to convince him to talk with us, to reopen the negotiations," she said. "We asked the Pope to speak for us, as Christians: to convince Mr Netanyahu to sit with us and try to end this struggle of more than six decades."

Asmaa al-Atawna's debut novel "Missing Picture" has been published in German translation (Keine Luft zum Atmen – Mein Weg in die Freiheit). In it, she describes life in Gaza from ... END_OF_DOCUMENT_TOKEN_TO_BE_REPLACED

At the end of every year, the team at Qantara.de gives you a run-down of the ten most-read articles on the site over the past 12 months. Here is a quick overview of the stories ... END_OF_DOCUMENT_TOKEN_TO_BE_REPLACED

Palestinian Christians are an integral part of the Palestinian national movement. This is the conclusion reached by the Chilean-born Palestinian political scientist Xavier Abu Eid ... END_OF_DOCUMENT_TOKEN_TO_BE_REPLACED

Jesus – Issa in Arabic – doesn’t merely enjoy the highest place among the prophets in the Koran. He is also revered in Islam’s mystical tradition for his message of love and mercy ... END_OF_DOCUMENT_TOKEN_TO_BE_REPLACED

With reported hostilities against Israeli journalists and the flag of the Palestinian territories flying on the streets and in the stadiums, it is clear the World Cup in Qatar is ... END_OF_DOCUMENT_TOKEN_TO_BE_REPLACED
Author:
Kate Shuttleworth
Date:
Mail:
Send via mail

END_OF_DOCUMENT_TOKEN_TO_BE_REPLACED
Social media
and networks
Subscribe to our
newsletter