Indonesia's comic scene is in a golden age. Control and censorship are a thing of the past, and comic artists are developing distinctly Indonesian forms of expression. Yet the industry remains marginal and plagued by self-doubt. Laine Berman reports 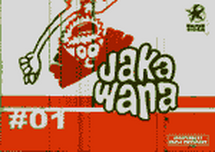 ​​Indonesian comic art has been reborn! Anyone with a sense of adventure who is willing to pay a few thousand rupiah for a photocopied comic book will be rewarded with some of the most interesting work found anywhere in the world.

Comic aficionados, pop culture historians and journalists consider the 1970s as the heyday of Indonesian comics. But this so called 'golden age' glorified the proliferation of locally produced copies: Chinese legends, foreign adventure stories and heroes, and wayang tales. Most of these were politically neutral with no connection to the concerns of contemporary Indonesian society.

No more control and censorship

Now the age of control and censorship has passed, and Indonesia's young komikus (comic artists) are expressing themselves in uniquely Indonesian ways. Yet the downside to this picture is that publishers are not yet doing justice to these local artists' work. 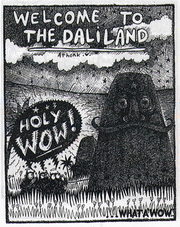 ​​The publishing industry is still in its infancy, and has yet to fully exploit its newfound freedom to sponsor local talent. Comic artists, including those with major publishing deals, still cannot make a living out of their art and most still distribute at only a few select spots, for example, at Taman Ismail Marzuki (the Jakarta Arts Centre).

Despite significant advances in cultural freedoms in Indonesia, and in the quality of comics, the key obstacle for Indonesia's artists has been the failure of publishing houses to value indigenous styles. Most 'professional' comics (those formally published) mirror Japanese manga or US Marvel style.

Since professional publishing neglects local output, the Indonesian public remains largely unaware of its own comic talent. Very few of the artists and studios represented at the many comic conventions held around Java each year would be called 'professional' in the classic sense since they are not formally published. Fewer again make a living from their comics.

The comic that won first prize at the 1997 National Comic Week, Ayam Majapahit by KiriKomik published by Balai Pustaka is a prime example.

The comic earned the artist a grand total of Rp23,000 and is not even listed in the Balai Pustaka catalogue! Papillon Studio in Semarang is a major comic producer, managed and promoted by Kio with a staff of 12. Papillon publish a local version of Japanese-influenced work.

Yet they too don't yet make a living out of it. As Kio explains, the problem is distribution. Their publisher is Elex Media Komputindo, an offshoot of Gramedia, the largest publisher in Indonesia. Despite this, no one seems to know how the comic is actually distributed and in Java the comic remains unavailable.

The great failing in these publishing efforts is the push to copy foreign styles rather than promote an Indonesian style. Many of the black and white, independent (self-published) comics have well-developed stories and great illustrations. Unlike the imported varieties from Japan, the US and Europe, they are highly relevant for contemporary Indonesia. 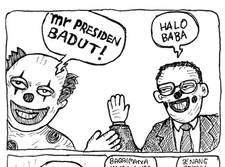 ​​Tono, a student at Petra University in Surabaya, is a perfect example. He produced a comic called Duit (Money) about kids hanging out doing what local kids do: skateboarding, drinking, fighting and eventually dying over money. His comic has no dialogue, which means the reader needs to fill in the blanks. Readers, he hopes, will judge the characters' actions as a road to self-evaluation.

Tono is like the vast majority of young komikus who produce comics out of love for the medium and a desire to express their view on life as a modern Indonesian. Their political spunk is refreshing compared to the self-censorship and conservatism that still exists in much of the mainstream media.

The new comics are evidence of an outspoken, reflective younger generation. Comics in contemporary Indonesia reveal young people's confusion and bitterness over the hypocrisy, corruption and abuses carried out in the name of 'reformasi', 'development' or 'democracy'.

These comics are also a major snub to conformity: their styles are as varied as the people who create them, bringing much-needed heterogeneity to Indonesia's popular culture scene. They explicitly counter the notion of a monolithic cultural identity which the Suharto government censorship laws tried to instil.

With the fall of President Suharto and the lifting of many censorship limitations (such as police clearance to publish), support for komikus has mushroomed. Unlike the past, every noted publishing house now has a section for comics. Gramedia created M&C to publish magazines and comics, originally limited to Disney and Hong Kong comics.

Three new local comic series on this label are Alakazam (Donny), Dua Warna (Alfi Zachkyelle) andTomat (Rachmat Riyadi). Alfi explains that his meagre success is shared with others in his studio through a 'gerakan gerilya' (guerilla movement) — supporting others to publish their work independently. 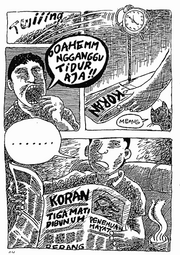 ​​The National Comic and Animation Week is now organised and run by MKI (The Indonesian Comics Society).MKI was formed in 1997 as a collective for komikus, and distributes information about studios, production, and promotional activities. It also hosts the annual Comic Week, which provides workshops and competitions for school children.

And nowadays comics are not a male-only domain. Zulfa, an agricultural student from Gadjah Mada University, founded Kasa Komic out of a love for the medium. 'As long as we're still young, why not try something new?' she says.

The women komikus of Kasa Komik create stories pitched from a female perspective. With themes like boys, love, friendship, and many other aspects of young women's lives, these comics show just how universal are experiences of young adulthood. Altis, Papillon, Bajak Laoet, Mediacela, Kasa, Komikaze and Daging Tumbuh are just a few of the 'studios' represented at comic conventions.

Comic studios come in a variety of forms. And while Indonesian komikus usually work individually, forming a collective with friends provides them with the support to strengthen their individuality. It is also a rejection of mass-produced culture in favour of the creation of new cultural values, a unique approach within a highly conventionalised environment. As Alfi from Sekte Komik puts it, 'we all have different visions but we progress together'.

Indonesian komikus have moved from obscurity to jobs and from censorship to complete freedom of expression. They have also grown in number, with the largest number of independent komikus in South-East Asia. Indonesia is the envy of its neighbours in terms of quality of work, and the number and professionalism of its comic organisations and conventions.

Nevertheless, the future success of Indonesia's comic world requires that it overcomes its greatest weakness: its enduring propensity to idolise the international market. There is just as much activity in Indonesia as anywhere else and just as much talent.

Perhaps there is no comparison to Marvelor DC Comics in Indonesia. But given a few years, Indonesia may well have its own thriving market. In order to achieve these lofty goals, however, local publishers and artists alike need to stop looking to the US or Japan for models of where they should be.

None of these locations suffered under the repressive censorship that so seriously inhibited the development of comics in Indonesia. Never before in the nation's history has there been so much talent, variety and freedom for self-expression.

It's time for Indonesia's general public to be made aware of the voices of young people, so ingeniously expressed through the comic medium. The 'golden age' of Indonesian comics is only just beginning to emerge.

The author is a frequent contributor to Inside Indonesia and lives in Yogyakarta.

Persepolis by Marjane Satrapi
East Is Not East, West Is Not West
In the cartoon novel "Persepolis," Iranian illustrator Marjane Satrapi has created a sensation with the story of her childhood in Iran. The book has been translated into several different languages and has met with enthusiastic acclaim. Petra Tabeling spoke with the artist.

Joe Sacco's "Palestine"
Authentic Depiction of Life in the Time of Intifada
The mass media's fondness for clichés is apparent in most reporting on the Israeli-Palestinian conflict. Sometimes it takes a cartoonist to show that not everything is as black-and-white as it seems. The journalist Joe Sacco has created a masterpiece of cartoon reportage: "Palestine". Petra Tabeling reports

END_OF_DOCUMENT_TOKEN_TO_BE_REPLACED
Social media
and networks
Subscribe to our
newsletter