﻿Politically speaking, the Yemeni opposition movement is extremely heterogeneous and therefore finds it difficult to act in concert. The only goal they all share is to bring about the resignation of the President. An analysis by Albrecht Metzger

Yemeni President Ali Abdallah Saleh has been in power for more than 30 years, during which time he has managed to hold the heterogeneous nation together and bring the powerful clans on side. But more recently his regime has become increasingly authoritarian in nature, and he has also favoured his sons and nephews in the allocation of important posts, particularly in the field of security policy.

Protests against this nepotism and authoritarianism have now been going on in Yemen for nine months, and in June it appeared as though the era of President Saleh might indeed have reached its end. He was badly injured in an attack, and flown out to Saudi Arabia for treatment. No one bargained on his return, at least not among opposition groups.

Holding on to power 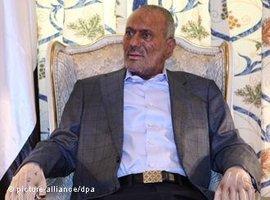 Yemen's President Saleh returned in late September from Saudi Arabia, where he had been receiving medical treatment for more than three months. He had been injured in an attack on his presidential palace in Sana'a in June

​​But the President's tenacity has surprised those observers who presumed he would not fight on. He returned to his homeland at the end of September, triggering a new round of battles between the opposition and security forces that have so far claimed the lives of several dozen people.

In view of the broad-based opposition front against the regime, how does Ali Abdallah Saleh manage to stay in power at all? What is propping up his rule? And why is the opposition not able to topple him?

Unlike a nation such as Egypt, Yemen is a highly heterogeneous country. There are stark religious and regional differences that play a key role in any analysis of the rebellions. In addition, Yemen is a tribal society; in some regions the central power has barely any influence on communities that operate an archaic tribal legal system distinguished by, among other aspects, the practice of blood revenge.

Each and every president of Yemen must take these differing power interests into consideration, it is difficult to rule with an iron fist, as a leader like Saddam Hussein did in Iraq. Ali Abdallah Saleh has maintained this delicate balancing act over many long years, but the circle of his supporters has in the meantime shrunk dramatically.

The President is an officer, making the military an important pillar in his power base. But even here loyalties are dwindling, key units have switched allegiances to the opposition, leaving the elite Republican Guard, led by Saleh's son, as the most important instrument of power.

As long as the President has the means to pay these elite units, he will be able to keep them sweet. Should he no longer be in a position to do this, they may also switch to the opposition camp. In this respect western, above all US support for the Yemeni military plays a significant role.

Saleh has managed to convince the US of his indispensability, above all regarding the war on terror. As he warned Washington, if he should be toppled, Al-Qaeda would make Yemen an important base for its operations. 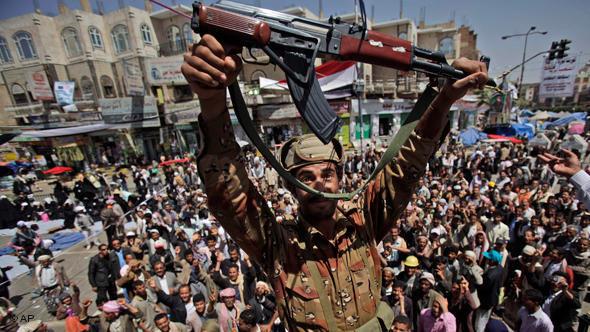 Resistance against the autocratic ruler: the protest movement and several opposition parties are calling for the immediate resignation of Saleh, who has been in power since 1978. They are supported by army units that have joined the "revolutionaries"

​​But the military alone is not enough to keep him in power. The clans are heavily armed, and anyone wanting to govern the country must buy their loyalty. The biggest tribal confederations are the "Hashid" and the "Bakil". Saleh is himself a member of the "Hashid" clan and for a long time cooperated with its leader, Sheikh Abdullah Ibn Hussein al-Ahmar.

Since the Sheikh's death in the year 2007 however, the situation has changed. Abdullah al-Ahmar sons want more power for themselves, and perceive Saleh as an autocrat that treats Yemen as though it were his private property. The Ahmar sons are also prepared to use violent means against the Yemeni security forces. The capital Sana'a has been the scene of repeated heavy clashes resulting in the deaths of dozens of people.

But the "Hashid" clan is heterogeneous within itself, and the Ahmar sons cannot rely on the support of all members. There are sheikhs who are resisting the Ahmar hegemony and who therefore side with the President.

An event in May showed just how divided the "Hashid" clan really is. When Hussein al-Ahmar, one of the sons of the dead Sheikh Abdallah al-Ahmar, declared he would be resigning his post in the governing party, he was unable to attend celebrations in his home town of Amran because tribal factions loyal to the President barred his way.

Tribal politics are complicated, and rival factions are easily played off against each other. To this day President Saleh has skilfully managed this challenging state of affairs, even if key clans have turned their back on him.

Regardless of this, the question arises as to whether Yemeni opposition groups are singing from the same hymn sheet, or more specifically pursuing the same goals. The Ahmar family is part of the establishment, and has been cooperating with the President for decades. The fact that its members have now joined the ranks of the opposition is purely a question of power, not because the Ahmars are concerned with furthering the principles of democracy.

Militarization of the opposition

The source of the Yemeni opposition is however a protest movement primarily consisting of students and civil society organisations. Their primary concerns are to turn Yemen into a civilian state with democratic structures, and to combat corruption. They set the ball rolling with protests in January, while the Ahmar family did not join the movement until May. 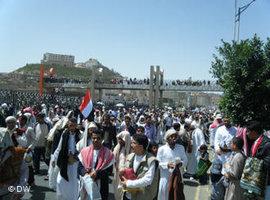 "Tribal politics are complicated, and rival factions are easily played off against each other. To this day President Saleh has skilfully managed this challenging state of affairs, even if key clans have turned their back on him," writes Metzger

​​In the military camp, General Ali Mohsen al-Ahmar is the man to watch. He is not related to the Ahmar family. An acolyte of President Saleh for many years, he has now developed his own personal power ambitions.

His entire unit has meanwhile declared allegiance to the opposition. Together with the Ahmar family, whose clan members are armed to the teeth, they have for days been engaged in heavy fighting with security forces controlled by President Saleh and his sons and nephews.

This militarization of the opposition is not in line with the aims of the civil society groups that want to see democratic change in the nation, and who are being sidelined by these bellicose clashes.

On the political side, there are the Joint Meeting Parties (JMP), a merger of highly disparate parties that have been in opposition for years. These include the Socialist Party, which enjoys support primarily in southern Yemen, as well as the Islamist Islah party, again led by one of the Ahmar sons.

All this goes to show how the opposition movement against Ali Abdallah Saleh is characterised by a deep-seated heterogeneity. It is difficult for it to act in concert when its only common goal is the resignation of the President.

In any case, the civil opposition movement has little in common with the power ambitions of the Ahmar family and General Ali Mohsen. The longer the military conflict between the clans and President Saleh goes on, the greater the danger that these will escalate into all-out civil war. As long as Saleh holds on to power, the nation will not come to rest.

Albrecht Metzger is writer and scholar of Islam based in Hamburg. His book "Der Himmel ist für Gott, der Staat für uns – Islamismus zwischen Gewalt und Demokratie" (Heaven is for God, the state is for us: Islamism between violence and democracy) is published by Lamuv-Verlag.

Philosopher Juergen Habermas was due to be awarded a major Arab prize in Abu Dhabi, but has turned it down following criticism. This decision torpedoes Arab efforts at a ... END_OF_DOCUMENT_TOKEN_TO_BE_REPLACED

In his book "Ground Zero: 9/11 und die Geburt der Gegenwart" (Ground Zero: 9/11 and the Birth of the Present) Islamic scholar Stefan Weidner analyses the consequences of the ... END_OF_DOCUMENT_TOKEN_TO_BE_REPLACED

As Qatar prepares to host the 2022 FIFA World Cup, the country has come under fire for its treatment of migrant workers, with some nations calling for a boycott of the contest. ... END_OF_DOCUMENT_TOKEN_TO_BE_REPLACED

German Middle East analyst Guido Steinberg and television journalist Ulrich Tilgner have both published new books on the conflicts in the Middle East. Their analyses and their ... END_OF_DOCUMENT_TOKEN_TO_BE_REPLACED

Televised Turkish dramas are all the rage in the Middle East. A young Ottoman TV Empire has been expanding its soft power by harnessing regional dialects, Arabic names and viewers ... END_OF_DOCUMENT_TOKEN_TO_BE_REPLACED
Author:
Albrecht Metzger
Date:
Mail:
Send via mail

END_OF_DOCUMENT_TOKEN_TO_BE_REPLACED
Social media
and networks
Subscribe to our
newsletter