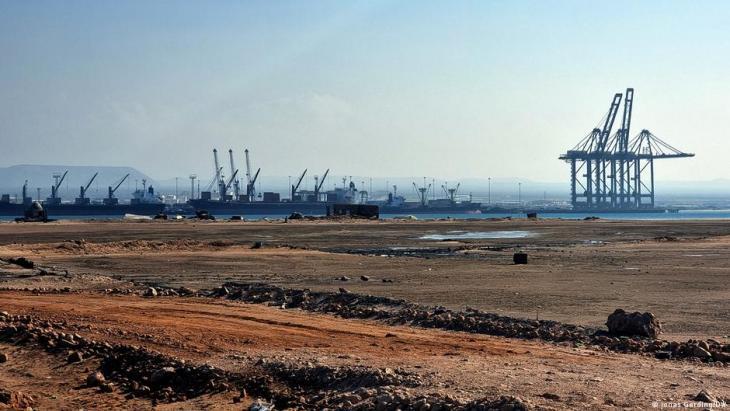 Port of Berbera, Somaliland
The development of a trade hub in the Horn of Africa

Dubai-based DP World is expanding its operations in Somaliland as part of a plan to turn the breakaway region into a major trade hub. Though Somaliland has relinquished commercial power, it may gain political weight. By Jonas Gerding

The two new cranes towering over a huge cargo ship are tall enough to reach even the highest of the containers that are stacked up five on top of each other. Trucks are lined up on the newly built 400-meter (1,324-feet) quay of the deep-water Port of Berbera, in Somaliland, waiting for the containers to be offloaded.

Mohamed Atteye has been a shift manager at the Berbera terminal since 2021, when the facility reopened after two years of refurbishment. The bearded man watches as the cranes gently move.

Not too long ago, unloading such a huge container ship was a dangerous task, he said, because dock workers had to use the ships' own cranes.

Atteye points out that turnover of cargo and containers at the port has substantially increased with the new equipment. Four years ago, the team was only able to handle seven containers an hour. "Now we can do 30 per hour. So you can see the big difference, the big jump," he told DW.

Before its upgrade, Berbera Port could handle only about 150,000 standard 20-feet containers a year. Current capacity is about four times as many, and there are plans to expand that further to about 13 times the cargo handled in the past. 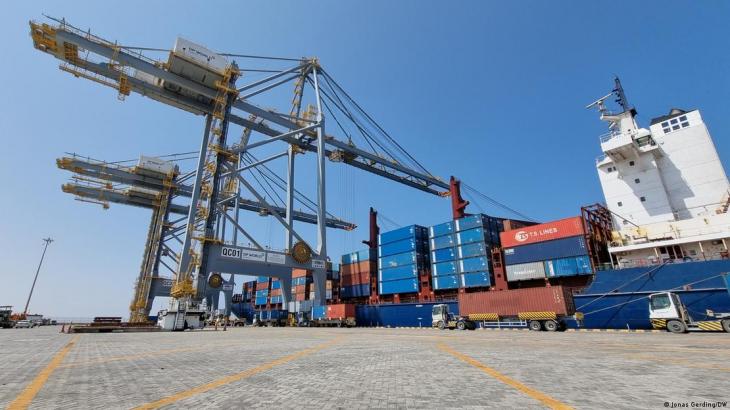 The two new cranes on the quay in the Port of Berbera were erected as part of the upgrade of the port. Turnover of cargo and containers has substantially increased with the new equipment

Berbera Port's expansion was financed by DP World, a multinational logistics company based in Dubai. Specialising in cargo logistics, port operations, maritime services and free trade zones, the company has commercial interests in 34 countries, among them 12 in Africa and the Middle East.

In exchange for its $442 million (€416 million) investment, DP World has won a 30-year concession with an automatic 10-year extension to manage the port.

Following the first phase of expansion, a second phase is currently under construction, which includes extending the new quay to 1,000 metres and adding another seven gantry cranes. In addition, the company has set up what it calls the Berbera Economic Zone – a free trade zone aimed at attracting investments and jobs in a range of industries.

Somaliland broke away from Somalia in 1991 and has acted as a de facto independent state since then, although it is not internationally recognised. The deal with DP World could create fresh momentum for the breakaway region's drive towards recognition. 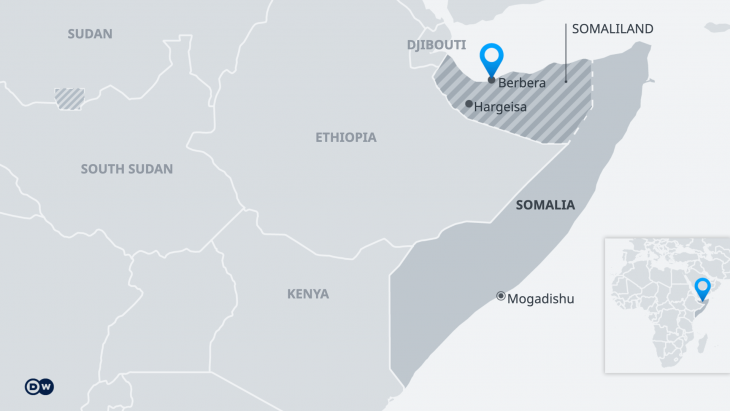 "Berbera is in a very strategic location"

From his office, Supachai Wattanaveerachai has a perfect view of the stacks of containers and the new quay. Previously in charge of DP World's operations in East Africa and the Middle East, the Thailand-born manager is now chief executive officer of DP World for Berbera Port.

Wattanaveerachai believes the area around the Horn of Africa is becoming a growth region. Ethiopia alone has a population of more than 100 million people.

"Ethiopia is a landlocked country. They need to have multiple gateways to serve the country. And Berbera is in a very strategic location. If you look at the distance from Berbera up to Addis Ababa, it is 900 kilometres [559 miles] – the same as Djibouti," Wattanaveerachai told DW.

Djibouti is a small independent state situated at the Horn of Africa that shares its border with Somalia to the south, Ethiopia to the south-west and Eritrea to the north. About 90 per cent of Ethiopia's trade currently passes through Djibouti's port, said Wattanaveerachai.

The DP World manager is convinced Berbera Port can compete with its rivals to the benefit of Somaliland and its people. "We are looking for profit, but a long-term, sustainable profit. So we need to make sure that the people around us have a better life, then they will support us," he said.

Wattanaveerachai added that DP World's investment has brought financial benefits worth $116 million to the local community over the past five to six years, including 2,700 jobs. Overall, the government budget will benefit to the tune of $87 million in direct revenue annually. 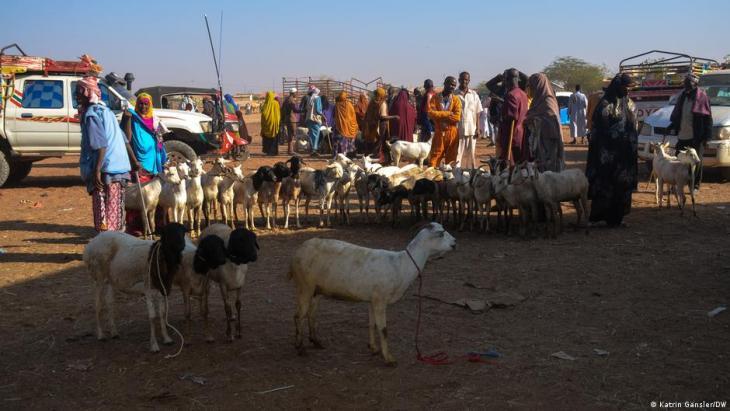 Somaliland has a population of approximately 5.7 million. Livestock farming plays a huge role in its economy. DP World manager Supachai Wattanaveerachai is convinced that the Port of Berbera can benefit the people of Somaliland. "We are looking for profit, but a long-term, sustainable profit," he says. "So we need to make sure that the people around us have a better life, then they will support us"

Two-thirds of goods headed for Ethiopia

A few miles outside Berbera, Joseph Oguta shows off a site developed by DP World that is set to become the Berbera Economic Zone. The Kenyan will head the free trade area that is due to open at the beginning of 2023.

The facilities, which are available for annual rental, long-term leases of 25 years or sale, include offices, prebuilt light industrial units as well as serviced land plots. Companies willing to settle there will be offered a wide range of incentives, including exemption from corporate tax, duty-free storage of goods, exemption from import or export permits and the ability to employ foreign labour.

"Whatever comes here, comes in tax free. On exit, it depends on where it is going. If it is going for export, then of course, there will be no taxes on it. If it is going to the local market, then the importer will have to pay taxes," said Oguta.

DP World estimates that two-thirds of the goods shipped via Berbera Port – mainly wheat, processed food, machines and construction materials – will be destined for Ethiopia. With a population of 4.2 million people, Somaliland is too small a market for the investment, the company has said. 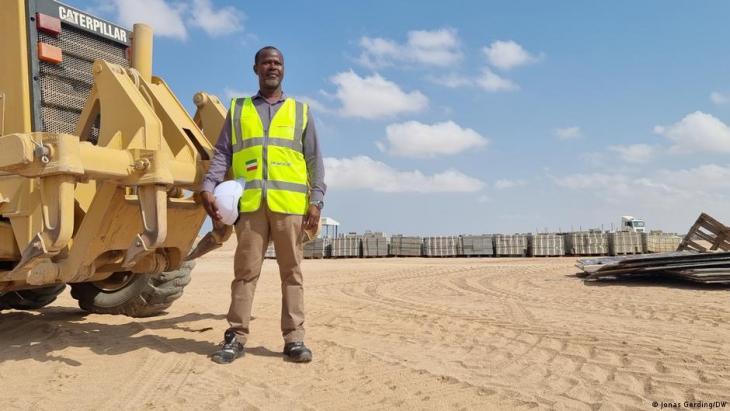 A few miles outside Berbera is the site of the new Berbera Economic Zone, which is due to open in early 2023. Joseph Oguta from Kenya (pictured here) will head the free trade area, which is currently being developed by DP World. "Whatever comes here, comes in tax free. On exit, it depends on where it is going. If it is going for export, then of course, there will be no taxes on it. If it is going to the local market, then the importer will have to pay taxes," says Oguta

May Darwich, an associate professor in international relations of the Middle East at the University of Birmingham, said Somaliland's goal to become a maritime gateway for its neighbours is full of risks. She has just returned from a visit to Djibouti and Berbera as part of her studies into infrastructure investments in the Horn of Africa.

"It is very, very high-risk. The Somaliland government earns much of its income through customs, which will be lifted. So that is a large loss in revenue. In return, Somaliland will like to see some of the development, trade, investors coming in. So I think that is the hope," she told DW.

The Berbera Port project got off to a rocky start, however. Initially, Ethiopia wanted to participate by buying a stake of 19 per cent in the project. But its war in the Tigray region plunged the country into economic crisis. The COVID-19 pandemic added to Ethiopia's woes as global trade stalled. As a result, Ethiopia opted out, leaving DP World and Somaliland as the only shareholders in the project, with stakes of 65 per cent and 35 per cent respectively. 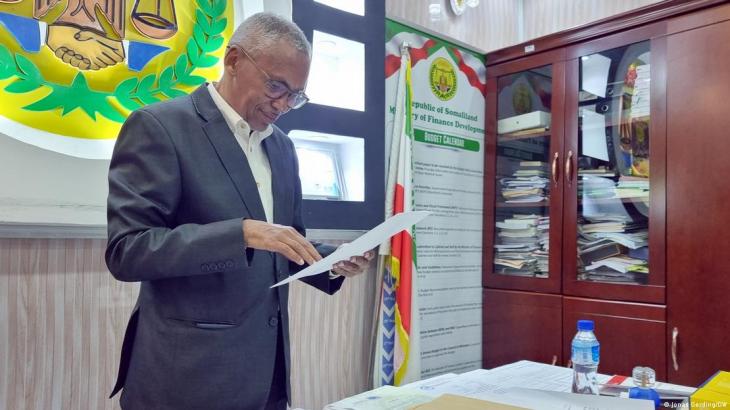 Saad Ali Shire is the breakaway region's finance minister and the mastermind behind its port and trade zone projects. He isn't worried about a drop in revenue in the wake of duty-free imports as part of the free trade arrangement with Ethiopia: "The more goods that come, the more money we earn," he says

In an interview with DW, he said he isn't worried about a drop in revenue in the wake of duty-free imports as part of the free trade arrangement with Ethiopia. The ownership structure would still guarantee enough income.

"Any profit that is made is divided by the ownership ratio. Any ship that comes to dock is charged separately by the Somaliland Ports Authority. And then, when the ship docks and the goods are unloaded, they are charged a handling fee, whether it is in transit or used domestically," said Shire. "The more goods that come, the more money we earn."

Darwich thinks the Somaliland government never really had a choice other than finding strong economic partners for its economic development. Giving DP World a majority stake in the project may not have been the best deal, but there wasn't any better option.

"They thought: 'Well, if we don't give up those rights, we will not be able to develop the port otherwise.' They are in the difficult situation where they don't have the resources. In a way that is how the deal comes across," she said.

Apart from the commercial aspects of the project, Somaliland's trade ambitions could bring the breakaway region back into the political spotlight in the Horn of Africa. As it seeks political recognition as an independent state, the cranes in the Port of Berbera could become a sign of stability in a troubled region.

The small East African nation of Djibouti has so far evaded musical discovery by the West. Now, however, the country's official national band, Groupe RTD, is picking up ... END_OF_DOCUMENT_TOKEN_TO_BE_REPLACED

Blending East African, Bollywood and Arab music traditions, Groupe RTD's "The Dancing Devils of Djibouti" is not only a stunning album, it is also the first internationally- ... END_OF_DOCUMENT_TOKEN_TO_BE_REPLACED
Author:
Jonas Gerding
Date:
Mail:
Send via mail

END_OF_DOCUMENT_TOKEN_TO_BE_REPLACED
Social media
and networks
Subscribe to our
newsletter