Fish out of Water – A Raï Musician in London

Raï has crossed the channel and gained ground in Great Britain. One of its sprouts is Abdelkader Saadoun, the self-proclaimed "King of Raï in the UK". Tareq Al-Arab met up with a self-confident artist in exile 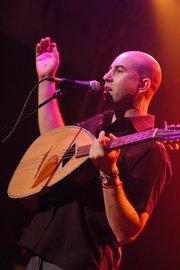 ​​Raï in Algeria was traditionally the music of the social outcasts. It kept its tradition of rendering the living conditions of the deprived from postcolonial Algeria to the unemployed and homeless youth of Algeria in the decades to follow. In the 1980s, Maghribian emigrants took it to France, gave it a modern coating and made it hugely popular.

People may relocate to a foreign country, but there's always one place they call home in their heart. It is where their ancestors come from, the cradle of their culture. Although they can't or even may not be willing to return to that place, a vital memory of it remains and with it often a lifelong longing.

Thus, some among the Maghribian migrants who came to Europe in the late twentieth century began to build cultural bridges for their compatriots. It so happened in France where musicians like Khaled, Cheb Mami or Rachid Taha took on the traditional Algerian Raï music to play it to their fellow countrymen in the nightclubs of Paris and Marseille.

These artists have by now established a widespread mainstream pop culture of Raï, initially nurtured on the comparatively small immigrant community of their respective country of origin.

Taking into account its colonial past, France – despite being a European country – is a natural breeding ground for sprouts of a Maghribian culture. Great Britain on the other hand is rather an odd choice in this respect. Still the Maghribian culture seems to have sloshed over to the United Kingdom. Its capital London harbours Abdelkader Saadoun, self-proclaimed King of Raï in the UK.

Tonight, Abdelkader Saddoun resides at the Cargo club in London's vain and trendy quarter Shoreditch. The club seems to have sold out. Among the audience is a clear majority of expatriates from Maghrib countries. The very moment Abdelkader's band kicks off the set with its eclectic mix of traditional Raï, jazz, rock, funk and dance music, one phenomenon is very striking: there is an instant passionate response by the audience. Immediately, people start to dance, clap their hands and sing along with joy. This is not simply a concert, it's a celebration.

While the audience is emerging in the music, Abdelkader clearly takes the centre of attention on stage, overlooking everyone in terms of both his tall physical appearance and a musical leadership that he exerts via a sort of conducting reminiscent of the "Godfather of Soul", James Brown.

The members of his truly multinational and technically brilliant band take turns in brief solos, each at the signal of Saddoun's hand.

Saddoun is an experienced performer. Born in the Algerian town of Khemis Miliana, the singer, percussionist and oud player Saadoun was already a well-known Raï musician in his homeland before forming a Raï band in London in 1992.

It was by mistake that he came to live in England, he jokes, explaining that in 1988 he was just doing a bit of travelling, passing by the UK on his way to Canada. Somehow he ended up staying. He was finishing his Arts degree and started doing Fine Arts exhibitions in collaboration with a few other artists when at one point they started playing Raï music just for enjoyment.

People where curious and showed interest in the music, he explains. "They were very impressed because they never heard this music before."

Common music for the underdogs

Can anyone – British, French or even second- or third-generation Algerians – with completely different, much improved living conditions relate to the specific expression of Raï music? After all, Raï initially had a purpose similar to that of the early Blues for the Afro-American community, a common music for underdogs. Abdelkader's recipe is straightforward and plain.

​​"Raï music is mainly about the young people and how they were suffering because they had a lot of problems. There wasn't a music to express themselves. But when Raï came with singers like Cheb Khaled, they could see themselves through the songs, see the happiness or see the suffering. It is like a comfort to you, if you have a problem with your wife, your girlfriend. I have a message for the whole world, not only Arabs. I play Raï music to communicate with people. You have to make them dance, then you can explain to them the music," says Abdelkader.

Purists argue that the "danceability" of modern Raï music eclipses the traditional Raï expression. Abdelkader disagrees: "In Europe singers like Khaled, myself or others started making dance music to attract the young generation, but I also give people the opportunity to listen to my lyrics and try to understand them, so I try to get my message through to them. At my concerts, I am trying to please everyone."

So there is no sign that Raï music – once caught by the currents of commercial interests – might lose its original traits and purpose to become a copy of its own? "No," says Abdelkader categorically, pointing out the eternal flame of individual artistic expression. While specifying, he casually glides onto one couch with some of the greatest artists of the 20th century:

"You can never become a Bob Marley, Cheb Khaled, Abdelkader Saadoun or Picasso. Everybody's got a style. You can't bring anyone to sing the Raï the way I sing it or somebody else from Algeria. That's why I am unique."

If Abdelkader Saadoun's message is to revel with joy, it is impossible to deny that tonight at the Cargo, he is well understood.

END_OF_DOCUMENT_TOKEN_TO_BE_REPLACED
Social media
and networks
Subscribe to our
newsletter