An Unprejudiced View beyond Cultural Borders

With her sensitive portrait of a young outsider in the film "En Garde," Hamburg director Ayse Polat won the Silver Leopard at the Locarno Film Festival. Since then, she has realized that the German media are often more interested in her Kurdish origins than in the film itself. 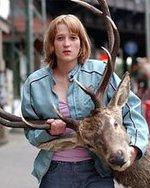 ​​When "En Garde" won the Silver Leopard in Locarno last year, Ayse Polat was pleased that her portrait of a young outsider was acclaimed for both its artistic merit and its subject matter.

During the international film festival, Polat's film was discussed with regard to its "second level of perception," its visual and acoustic techniques and the depth of her character study – everything that goes into the making of a good film. The fact that the director is of Kurdish origin, came to Germany as a child and has resided in Hamburg ever since had no effect whatsoever on the jury's decision.

The media's fascination with nationality

Once she'd arrived back in Germany, the award-winning director was confronted with another perspective: The media were mainly interested in her film in the light of her biography. "Every interview starts with the obligatory question about my personal history," the 34-year-old filmmaker reports.

Often, it seems as if German reporters are desperately searching for the "exotic" element in her film – despite the fact that "En Garde" focuses on the suffering and hope of a young German woman named Alice (Maria Kwiatkowsky) who is sent to a home by her mother. Polat's film deals with the feeling of alienation – in one's own country and own life – independently of issues of nationality.

Aside from wonderful performances by the actors, the quality of the screenplay and the creative way in which it was brought to the screen are chiefly responsible for the film's success. Clearly, the director is familiar with the challenges of working in this genre.

"En Garde" doesn't ignore the cliches familiar from boarding school stories and conventional teen comedies. Instead, it ironically defies them. In the film, the combative sport of fencing brings two girls together who at first are bonded solely by a feeling of isolation and a "different way of looking at things."

Slowly but surely, the young Kurd Berivan (Pinar Erincin), who is awaiting her deportation at the home, becomes Alice's confidant. The encounter dramatically influences the course of the 16-year-old's life.

Migrants as a everyday part of society

When someone asks her why she chose a Kurdish girl to play the role of the friend, Ayse Polat's response is to the point: because this is realistic.

There are quite simply lots of people of various ethnic origin in Germany, says the director, adding that migrants would continue to appear as "everyday characters" – and thus part of German society – in the films she makes in the future.

It is neither an ethnic nor a cultural solidarity that leads the characters in Polat's "En Garde" to one another, but rather their individual human intimacy. "Why should identity be defined solely on the basis of nationality?" Ayse Polat is fed up with those who think in such narrow categories. "The fact that I'm a Kurd is just one of the many aspects that defines me as a person."

But isn't this an important point? Isn't it a special position which allows the filmmaker to take a more revealing look at the society in which she lives?

"Of course, if you come to a country where you don't understand the language and don't know the culture, you observe more closely. At first, I didn't feel like a part of this society. I felt more like an observer," Ayse Polat states thoughtfully.

Her definition of home is "very different," she adds. Above all, she views Hamburg as her home, since she's spent the past 28 years of her life there. Concerning the experiences of her own personal history, she says existing between cultures isn't necessarily a negative thing.

An unprejudiced view beyond cultural borders

For Ayse Polat, familiarity with different cultures also means looking beyond borders in terms of her art. The filmmakers she admires most include David Lynch, Michelangelo Antonioni and Stanley Kubrick, but she is also a great fan of the works of Kurdish director Yilmaz Güney.

Güney, who died in 1984, is known as the "Father of Kurdish Cinema." His films are barely known outside of Turkey, however. "When a people's language has been forbidden for such a long time, they certainly gain a different access to visual metaphors," says Ayse Polat in explaining the peculiarities of "Kurdish" films.

The director also surmises that the fervent partisanship of Kurdish directors for their countrymen is due to the persecution and oppression which took place over many decades.

The "new tolerance" toward the Kurdish people in Turkey is a recent development, and one will have to wait and see how the situation develops in the long term.

Polat is very happy about the parallel successes of Kurdish directors Bahman Ghobadi and Hiner Saleem, who this year won prizes at film festivals in San Sebastian and Venice, respectively.

Ghobadi – who previously scored an international success with "A Time for Drunken Horses" – will also be represented at the Berlinale by his newest film, "Turtles Can Fly."

Ghobadi's invitation to Berlin honors his extraordinary artistic achievement without regard for nationality and ethnic origin.

The focus of interest is the story he has to tell and his way of telling it. Ayse Polat wants all filmmakers to be met with such an unbiased and unprejudiced attitude.

END_OF_DOCUMENT_TOKEN_TO_BE_REPLACED
Social media
and networks
Subscribe to our
newsletter