The Rediscovery of African Values 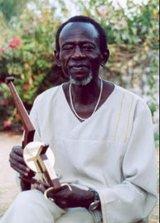 ​​"Touring and playing music is something I will never get tired of. I still want to go on and on and on and on." Those are the words of 64-year-old Badou Jobe. Between the years, the composer, arranger and bass-player from the Gambia has much to say to people in Africa and around the world. Forty years of experience, determination and strength have shaped his unique band "Ifang Bondi".

"The band stands for the rediscovery of African values", Badou Jobe says. "Culture is the core that defines nations. To forsake your culture is to forsake your existence!"

Five years ago, a jury chaired by Miriam Makeba honoured the intellectual artist with the "KORA All Africa Music Award" – the African Grammy. But in his home country, the Gambia, the artist is still not allowed to perform.

How it all started...

Since the mid-sixties, a band called "The Super Eagles" had become one of the most popular groups throughout Western Africa. Their repertoire was typical of most dance bands during the time, comprising cover versions of Western pop songs, Afro Cuban and Congolese music as well as some of their own compositions.

And these compositions by bass-player Badou Jobe brought success – in Europe: The Super Eagles were the first African band to tour and record in England.

"When it started, I was the only African musician hanging around. But now I can see there are many of them!"

The need to explore cultural independence

"Times have changed," Jobe muses and smiles. Those years of success were also the first years of independence in West Africa. With political self-reliance came the urgent need for psychological and cultural freedom from colonialism – the need to build an identity for the young nation states in order to be truly independent.

Jobe was strongly involved in intellectual movements and debates. He was a very active Pan-Africanist. So he grounded The Super Eagle, started a new band, and his musicians began to work on a radical change in musical direction.

"Ifang Bondi" was founded in 1973. Badou Jobe's new band takes its name from a fearsome Mandinka spirit who is endowed with the ability of seeking out evil-doers in society. The term literally means "Be Yourself!" – a befitting motto for Jobe 's musical rebirth.

Once part of the great Manding empire, the Gambia is the historical home of an impressive number of cultures like Mandingo, Wolof, Fula, Jola and Serer, all cherishing their own musical traditions. Digging deeply into this amazingly rich musical heritage, Ifang Bondi have come up with a unique style: their "Afro Manding Sound".

"I'm not mixing the different cultures!" asserts Jobe. "I play each of those ethnics, their music in its purest form without mixing it with another. But you have to know how to do that. You have to do research and know how each ethnic group plays its music."

Rather than blending traditions in a West African musical stew, band-leader, arranger and composer Badou Jobe is eager to show their individual beauty.

Going back to the roots 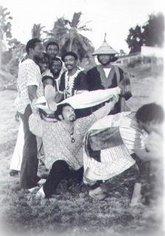 ​​After two years of studying the ancient Gambian traditions preserved by the hereditary griots, Ifang Bondi and his musicians reinterpreted the country's rich musical and cultural heritage in contemporary dance formats. Traditional instruments were added to bass, guitar and drum kit; the sabar and bugarabu replaced the former congas; Spanish and English lyrics were exchanged for Mandinka, Wolof and Fula; and Badou no longer appeared in suit-and-tie but changed into traditional African clothes.

It is Badou Jobe's aim to secure a firm place for African music in the 21st century. And he knows: a healthy music scene is best supported by providing it with well-trained artists from the young generation.

Badou's dedicated leadership has turned Ifang Bondi into a musical academy for upcoming musicians. But Badou was also very outspoken when it came to his vision of a future society.

Since the early 80's, the artist and his band have been ostracised by their country's governments for their public criticism, says the band's manager. "A heavy political delegation came by, informing us that we would get full facilities and financial support on condition that from now on we would play songs in praise of Gambia's political leaders," Irene van der Wetering, a former member of the band, recalls. "Badou refused. And that was the end of Ifang Bondi in the Gambia."

The power of politics

"He said: 'I'm not a praise singer! I am not going to praise anyone! Instead, I will just sing about what is happening around me!' Which is actually also the real role of the griot – singing about what things are wrong," explains van der Wetering. "And he has been doing that for a while. But unfortunately, the powers to be don't appreciate that. So ever since the 80's, they have not allowed him to play in his own country or even to have his music played on the radio! It's a problem! And that's because they don't want to hear the truth!"

The music of Ifang Bondi is no comforting murmur of domesticated chords, no easy-listening. Tricky, shifting rhythms and haunting melodies are woven into dense hypnotizing patterns that keep Jobe and his young musicians in a powerful grip. But after a concert, Badou Jobe is pensive…

"I'm not a politician… a serious musician and who is very, very current with what is happening in Africa," Jobe says. "But in 2004, going back to the Gambia, I was disappointed to see that people are suffering! The biggest problem is the basic things: fooding for example, and sanitation. Transportation is a problem. Education. Everything, you know?!"

Jobe's contribution is his tribute to the Gambia's cultural tradition which he hopes to bring to new life.

"Maybe we have to go back…"

"It's hundreds' of years of music which has never been played. So with my generation, I will play music till I die and will not even go halfway. So it has a lot to give…"

But it's not just the Gambia that's on Jobe's mind.

"We have to turn back to see what has been happening to this world, how destructive we are as people, and go to think and face and start it new," Jobe suggests. "I have a feeling everything is stagnant now. Because mankind is confused and doesn't know what is happening. So maybe we have to backdate how it used to be years ago and start from there!"

Badou Jobe currently splits his time between his native the Gambia and the Netherlands. And despite his call to rely on traditional wisdom for orientation in modern times, Jobe nowadays composes his songs on his computer before they get to be played by real instruments.

END_OF_DOCUMENT_TOKEN_TO_BE_REPLACED
Social media
and networks
Subscribe to our
newsletter