Burhan Öçal was one of the pioneers who introduced the diversity of Turkish music to the West and, in return, always wanted to learn from Europe and America as well. Now he has moved back to Istanbul again, which is particularly vibrant at the moment. A portrait by Stefan Franzen 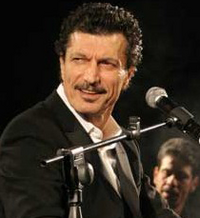 Burhan Öçal: "Seventy percent of Turks are under 30. In human terms, but economically and culturally as well, we have tremendous potential in the country"

​​Commuting back and forth between his adopted home of Zürich and the Bosporus, the Thracian percussionist and composer Burhan Öçal has left his mark on literally all musical genres, from classical, to traditional music of the Roma and Sufis, to techno.

Now he has moved back to Istanbul again, in order to enrich the metropolis, which is particularly vibrant at the moment, with his unorthodox ideas. His latest album is dedicated to the city's Grand Bazaar.

Anyone sitting opposite Burhan Öçal quickly discerns the many facets of his personality. The trademark giant sunglasses are suggestive of macho affectation, but his gestures are more those of a high-strung child. And when he tells his life story, his voice is soft, a bit lyrical.

"My father owned a cinema in Istanbul where Roma always worked as bootblacks and sold pumpkin seeds," he recalls. "So I grew up quite naturally with them and their music. In addition, he founded the first jazz quartet in the city, and that is where my weakness for jazz and American films from the Clark Gable era comes from.

My mother, on the other hand, gave me insights into religious life; her family came from Konya, the center of the Sufi brotherhoods, and she sang the Koran at home."

Öçal is sitting in a hotel south of Basel, where, at the invitation of the festival "Stimmen" (Voices), he is presenting a program specifically developed from religious hymns, readings from the Koran, and excerpts from dervish rituals, with masters of classical Turkish music.

"I have always had great respect for this thousand-year-old tradition, and, although I also play pop and techno, I would never dare to combine Sufi music with show elements. That would be like performing Bach cantatas in a beer tent," he says with agitation, referring to the new craze of "Sufism light" as practiced, in his view, by artists such as Mercan Dede. "I can flout taboos and play modern music, be timeless and boundless, and draw inspiration for new things from the past, but I cannot destroy something sacred for the sake of a cool image."

If you contemplate some of the stages of Öçal's career, it is obvious what he means by "boundless." As an adolescent, he rigged up his own drum set out of bottles, and plastic bags, and at 14 he was already a professional drummer with his own band. He plays bebop, gypsy music, and the Beatles, and developed his own technique on the darbuka, the Turkish percussion instrument par excellence.

​​From then on, his musical life encompassed every conceivable style and genre. He embarked on a wide range of collaborations in the jazz and fusion fields, played with Joe Zawinul, the Kronos Quartet, and the funk bassist Jamaladeen Tacuma, and, with his friend George Gruntz, served as a link between Turkey and Europe.

He was active in both the Turkish and European classical music scenes, and is currently setting the story of all 36 sultans of the Ottoman Empire to music with the Frankfurt ambient artist Peter Kuhlmann, aka Pete Namlook.

But the project that Europeans associate his name with first of all is the Istanbul Oriental Ensemble. Öçal, as musical director, and his Roma musicians created the atmosphere of a harem and caravansary in opulent sound with dulcimer, 'ūd, clarinet, and percussion. In terms of personnel and sound technology, he has now given his formation a "fresh cell treatment."

Where the heart of ancient Istanbul beats

"The ensemble's new recording is dedicated to Istanbul's Grand Bazaar, Kapali Çarşi. Since we work strictly with instruments, the music alone, without text, has to convey the message that this is about something magnificent, spacious. That is why I chose an ensemble with 12 strings for several of the songs, in order to achieve this orchestral sound."

Öçal knows the maze of the bazaar, with its up to 30,000 visitors daily, and many of the stallkeepers like the back of his hand. For him, this is where the heart of ancient Istanbul beats, near the Topkapi Palace and the Hagia Sophia.

The modernist with nostalgic tendencies regrets that this Istanbul is more and more giving way to a new snobbism. "The new rich who come to the city from the Aegean and Anatolia and make fast money are actually the greatest danger for the secular state, even more than the fundamentalists. They line their pockets on our history, create superficial fashion designs out of Ottoman figures, and at the same time build architecture modeled on Manhattan that, for me, is nothing but environmental pollution."

Still, Öçal would not have returned to the Bosporus if he had not also seen an opportunity in the "anything goes" attitude that exists there at the moment.

"Seventy percent of Turks are under 30. In human terms, but economically and culturally as well, we have tremendous potential in the country. What matters now is that we get honest, uncorrupt leaders; then we could overcome our economic and ethnic problems in 10 years. And it makes no difference to me whether or not we enter the EU. The most important thing is that a development takes place in people's minds and that everyone sticks to his roots – then it also makes no difference whether you are Christian, Muslim, or pagan."

Sufi DJs and Sultan Techno
A Foray into the Modern Music of Istanbul
Nowhere in the Islamic world does the Orient coexist so well with the West. The music scene in the metropolis is a good example. It offers a natural blend of Turkish traditions and Western urbanity. By Stefan Franzen

Ensemble Sarband
"Mozart Is No Better Than Dede Efendi"
Sarband endeavours to show connections between European, Islamic and Jewish music-culture. "Dream of the Orient" is the name of the ensemble's musical program that demonstrates Turkish influences on 18th century European music. Susanne Güsten reports

END_OF_DOCUMENT_TOKEN_TO_BE_REPLACED
Social media
and networks
Subscribe to our
newsletter