"There's No Such Thing as a Typical Turkish Woman"

Hilal Sezgin is one of the few journalists of Turkish origin who reports intelligently and without bias on Islam, women's rights and integration in Germany– a boon for the features sections of German newspapers. Nimet Seker introduces the author 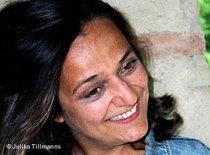 ​​ "As editor, I had no desire to print 'warped' texts", says Hilal Sezgin about the debate on Islam that flared up following the terrorist attacks of 11 September 2001. Back then the journalist was working at the non-fiction book review desk of the Frankfurter Rundschau newspaper.

Whether due to ignorance, blanket judgments or the wrong choice of imagery – a one-sided picture of Islam has dominated the media ever since 9/11. And journalist Hilal Sezgin thinks that competent colleagues and commentators are in short supply in this field.

That's why Sezgin, daughter of the renowned Islam scholar Fuat Sezgin and the German Muslim Dr. Ursula Sezgin, chose Islam as one of her focuses following 11 September. "The 11th of September inevitably prompted people to ask themselves: for god's sake, what kind of religion is this that I belong to? Is there something about Islam I've totally misunderstood?", Sezgin wondered after the horrific terrorist attack.

Up until 2001, Sezgin had written mostly on philosophical themes. Born in 1970 in Frankfurt am Main, she studied philosophy, sociology and German language and literature and initially planned to do her doctorate in philosophy. She works today as a freelance journalist and author.

She is one of the very few female Muslim writers working for national newspapers. But we should emphasise that she is first and foremost an author. Because, despite being a Muslim women, Sezgin does not write only about Islam and does not depict things solely from the standpoint of her autobiography. In this respect, she is virtually unique in Germany.

Sezgin's panorama of topics ranges from moral philosophy, political philosophy and animal ethics to immigration issues in Germany. For example, she writes a joint monthly column called "Das Schlagloch" ("The Pothole") for the tageszeitung newspaper with Ilija Trojanow, author of the best-seller "The World Collector". But she also writes on subjects such as the latest Harry Potter book.

"Mohammed and the Signs of God"

Sezgin occupies herself with Islam beyond the realm of journalism as well. Together with the Egyptian reform theologian Nasr Hamid Abu Zaid, she recently presented in the book "Mohammed und die Zeichen Gottes" ("Mohammed and the Signs of God") a modern interpretation of the Koran that under no circumstances relativises the faith or calls into question the holy book of the Muslims.

​​ She writes for example: "In order to study the political consequences of religion, one must look at history, and not attempt an exegesis of holy scriptures." That's a clear answer to the media discourse that searches the Koran for the legitimation of Islamist violence.

Sezgin laments the lack of alternate viewpoints in this media discourse, which sometimes fails to demonstrate the most basic background knowledge or any inkling of farsightedness. Editorial offices rarely employ journalists with an immigration background – in this case Muslims who might be able to replace a misleading image or edit a text – preventing the further spread of common clichés or offering their colleagues feedback and suggestions.

"At the moment every newspaper is desperately seeking an Islam expert, who then becomes the mouthpiece for the entire set of issues and is always asked to proclaim the 'official' opinions from the lectern", says Sezgin.

In recent years, the complaint has been voiced that there are too few journalists with immigration background in Germany. Expert conferences took place, promotion programs were initiated – but what has been achieved? "These kinds of inequalities will not resolve themselves without help", notes Sezgin. "That goes for women, and for immigrants as well."

How has her career progressed? Has she had to deal with an occupational disadvantage because she's half Turkish? "As a woman you have this problem anyway. You have to fight your way through, but the more you fight, the more you're hated. So you have to somehow 'fight gently', which is actually impossible", muses Sezgin, who regards herself as a feminist.

Speaking of feminism: in today's German newspapers, you have to search long and hard to find anything on this topic. And this despite the fact that there's so much to report – about the struggle for emancipation on the part of female immigrants and their daughters.

​​ But then one does finally come upon an intelligent article on the subject in the tageszeitung or the ZEIT newspaper– by Hilal Sezgin of course. "Feminism in Germany: a discourse that could hardly be quieter or more reticent. It is only in the integration debate that the theme of domestic violence has found a refuge, while the only problem women of German origin seem to face is the lack of day-care places for their children." These are the words that introduce one of Sezgin's non-fiction book reviews.

In a radio interview she avows: "I still see myself as a veteran feminist – not that I ever contributed to the revolution, but I did always sympathise with it, with the 'good cause'. I have never found domestic violence to be a topic that truly interests the public. That has changed, however. Especially as concerns Turkish women, there is suddenly an incredible amount of interest, even in the Bild-Zeitung, but I just don't trust it."

Leave the ethnic glasses in their case

Sezgin's book "Typisch Türkin? Porträt einer jungen Generation" ("The Typical Turkish Woman? Portrait of a Young Generation") likewise has a great deal to do with feminism. She portrays here 19 women aged 20 to 40 years, each of whom couldn't be more different. The book makes no claim to putting forth a thesis. It is more about demonstrating diversity, about dispelling clichés.

What are these women like? Are they classic victims of the Islamic patriarchal system, like the ones we know from other best-sellers? Sezgin was frequently surprised herself by the openness and individuality of the women she interviewed.

Here is a pious Muslim who fully identifies with the city where she lives and which has shaped her life, Mannheim, and who says the people who had the most influence on her life are as follows, Pippi Longstockings, Hermann Hesse, Annemarie Schimmel, Rumi.

Or an advertising assistant who likes to dance Samba, and a career-oriented, devout and emancipated lawyer, who finds time for an interview at the airport between check-in and departure …

The Germans would do well to "leave their ethnic glasses in the case", Sezgin once wrote. There's no such thing as a typical Turkish woman.

Gazelle – A Multicultural Women's Magazine
For a Positive and Multi-faceted Image
After searching in vain for a magazine that appeals to the interests of female immigrants, Sineb El Masrar decided to found her own women's magazine. "Gazelle" is Germany's first multicultural women's magazine. Naima El Moussaoui introduces the new publication