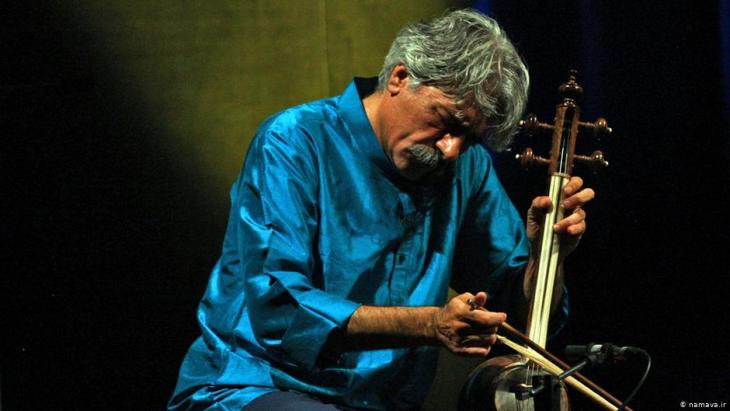 These days you might be forgiven for wondering whether international relations would be better served by artists than politicians. Iranian Kayhan Kalhor, a bridge builder from the world of music, holds both the 2019 WOMEX Artist Award and the 2018 Isaak Stern Human Spirit Award. By Bernd G. Schmitz

Kayhan Kalhor was born in 1963 in Kermanshah to a Kurdish family. At the age of seven, he began his musical education on the kamancheh, a traditional Persian bowed stringed instrument. At twelve, Kalhor first performed with the radio and television orchestra of his native city. Six years later, he was already playing in the Shayda Ensemble under the tar master Mohammad Reza Lotfi, who directed the ensemble at the renowned Chavosh Institute in Tehran.

Many music enthusiasts at the time regarded the young virtuoso as a prodigy. In addition, he was ambitious and keen to learn more about Persian music and its origins. As such, he did not only study the radif, the rules and taxonomy of traditional Persian music, but also travelled throughout the Iranian provinces of Khorasan and Kordstan, where he was fascinated by the local folk music. In an interview he gave in 2012, Kalhor said, ʺThere is no traditional Iranian music without folk music. It is the grandfather of classical Persian music.ʺ

Kayhan Kalhor’s interest was not only limited to Iranian music. In 1984, when he was 21, he left for Rome, where he would study at the Conservatorio di Musica Santa Cecilia. He continued his studies in Western classical music in 1986 at Carleton University in Ottawa, Canada. One year after graduating, Kalhor settled in the USA, where he lived from 1993 to 2017, with the exception of long concert tours and stays in Iran.

Homage to Shajarian and Nazeri

While in Iran, Kalhor performed with many leading exponents of classical Persian art music and composed works for well-known singers, such as Mohammad Reza Shajarian and Shahram Nazeri. In 1991, Kalhor co-founded the Dastan Ensemble, a traditional Iranian orchestra, which, in various formations, continues to this day.

Kalhor remained a member of the group for only a few years. Looking far beyond the horizon of Iranian music, he discovered affinities in neighbouring musical cultures. As a result, in 1997, Kayhan Kalhor founded the Ghazal Ensemble with the sitar player Shujaat Khan, thereby melding North Indian and classical Persian music.

At about roughly the same time, the American cellist Yo-Yo Ma had the idea of forming an international network of musicians, which he called the Silk Road Project. Kayhan Kalhor soon became a member of the collective and remains so to the present. In 2017, the group received a Grammy Award in the category of World Music for its album ʺSing me Homeʺ.

Joining the Silk Road Project marked the beginning of a series of very successful collaborations with exceptional instrumentalists, such as with the Kronos Quartet (2000), the New York string quartet Brooklyn Rider (2008 and 2012) and the Turkish saz virtuoso Erdal Erzican (since 2013) – to name but a few.

Today, Kayhan Kalhor belongs to a small elite of international musicians whose names are synonymous with the instrument they play, for instance, Djivan Gasparyan for the duduk, Ravi Shankar for the sitar, and Kalhor himself for the kamancheh. Not only has Kalhor achieved unparalleled mastery of the Persian fiddle, but he has freed it from its original context of traditional Iranian music and introduced it to various musical genres through his collaborations with musicians from other regions of the world. Yet, Kalhor has invariably withstood the temptation of engaging in such fusion projects merely because they would be popular with world music fans.

In a 2019 interview with the British music magazine Songlines, he commented on this subject. “To jam only on the basis of a particular rhythm may be nice, but it lacks spirituality and depth.” In addition, many musicians trained at Western conservatories frequently lack the ability to engage in the age-old art of improvisation, which is a characteristic part of his musical culture.

Nonetheless, co-operation with academically trained musicians can still succeed wonderfully, as is evidenced once again in Kayhan Kalhor’s most recent album “It’s still Autumn”, recorded in 2019 with the Rembrandt Frerichs Trio. Together with the Dutch jazz musicians, Kalhor has developed a unique musical language, which elevates listeners to a highly meditative mood.

Kayhan Kalhor has received numerous awards for his musical work to date, most recently the 2019 WOMEX Artist Award. In 2018, he was presented with the Isaak Stern Human Spirit Award, which the jury awarded on the basis of the artist’s deep humanitarian stance and the unifying message found in his numerous musical projects.

During a press conference at the 2017 Tirgan Festival in Canada, Kalhor stressed that he hoped his concerts would “contribute to overcoming mutual ignorance.” This, together with stupidity, is responsible for many of the world’s problems. He finds hope in the fact that “almost everybody knows of Beethoven or Mozart, but not the names of past rulers of their own country.”

The ever-modest artist dedicated his WOMEX award to “the legacy of Mohammad Reza Shajarian, in the name of all Iranian musicians,” whose difficult working conditions Kayhan Kalhor knows only too well. Many times, his concerts failed to receive necessary permission or were cancelled at short notice. The reasons have not always been related to the work to be performed, but were frequently due to the struggle for power and influence by individuals within the state cultural institutions of the Islamic Republic.

Despite this, Kayhan Kalhor decided in 2017 to once again reside in Iran, after spending so many years in North America. In interview with Orlando Magazine in the autumn of 2018, he cited the policies of the Trump government directed against immigrants as the reason. Asked where he felt his home was now, the artist answered, “Home is where your heart feels happy. (…) It is not the U.S. these days.”

In February, Kayhan Kalhor will be on tour in Germany, Austria, Italy and Switzerland with the smallest possible artistic line-up for a traditional Iranian musical ensemble. He will be accompanied only by the Cologne-based Iranian percussionist Behnam Samani. He has thereby come full circle from his first album “Scattering Stars like Dust” (1998), on which Kalhor was only accompanied by Pejmam Hadadi on the tombak.

Home
Print
Newsletter
More on this topic
Interview with the Iranian virtuoso Kayhan Kalhor: For the love of improvisationThe Silk Road Ensemble: "The Music of Strangers" – A quest for perfect harmonyMohammad-Reza Shajarian: The master rebel
Related Topics
Iranian music, Musical worlds
All Topics

Among the 24 squads at the Euros, dozens of players with African roots will turn out in the June 11-July 11 tournament. Several of them are top names at this pan-continental event ... END_OF_DOCUMENT_TOKEN_TO_BE_REPLACED

Reading Hassan Blasim's God 99 is an immersive experience of grief and exaltation, anger and disgust, writes Marcia Lynx Qualey. We join the Iraqi narrator as he sits around in ... END_OF_DOCUMENT_TOKEN_TO_BE_REPLACED

Turkey's parliamentary and presidential elections are scheduled for June 2023. But they are already casting a shadow. While the opposition is calling for early elections, ... END_OF_DOCUMENT_TOKEN_TO_BE_REPLACED

Recep Tayyip Erdogan, disappointed by the European Union’s reluctance to integrate Turkey into its ranks, has re-directed his country’s diplomacy toward the Maghreb and Africa to ... END_OF_DOCUMENT_TOKEN_TO_BE_REPLACED

A law is currently being debated in Morocco that would legalise the cultivation and export of medicinal cannabis. For many small farmers, this would bring considerable advantages ... END_OF_DOCUMENT_TOKEN_TO_BE_REPLACED
Author:
Bernd G. Schmitz
Date:
Mail:
Send via mail

END_OF_DOCUMENT_TOKEN_TO_BE_REPLACED
Social media
and networks
Subscribe to our
newsletter