The Unknown Head of Government

Little is known about the designated head of Palestine’s government, Ismail Hanija – except that he was Dean of the Islamic University and personal assistant to Hamas leader Sheikh Ahmed Yassin. Peter Philipp reports

Little is known about the designated head of Palestine's government, Ismail Hanija – except that he was Dean of the Islamic University and personal assistant to Hamas leader Sheikh Ahmed Yassin. Peter Philipp reports 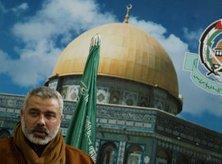 Ismail Hanija before a picture of the Dome of the Rock, one of Islam's shrines built on the Temple Mount in Jerusalem. Hanija, 43, seen as a leader of the group's pragmatic wing

​​Not even Ismail Hanija's exact age is known: estimates range between forty and fifty. What is certain, however, is that he was born in the "Shati" ("beach") refugee camp in the center of Gaza.

His family had fled there in 1948 from Askalon, the present-day Ashkelon, after the founding of Israel. Like most refugees from the south and southwest of Israel, they were housed in a refugee camp, where they lived through the years of Egyptian administration (until 1967) and the subsequent Israeli occupation (until 2005).

Ismail Hanija was among the first students to attend the "Islamic University" in Gaza, receiving his degree in Arabic Literary Studies in 1987.

Even while at the university he became active with other students, graduating at the time when the first "Intifada" broke out. The recently-founded Islamist Hamas movement ("Harakat al-muqawama al-islamiyya": "Islamic Resistance Movement") played a part in the Palestinian uprising, and Hanija joined.

At the very beginning of the Intifada, Hanija was arrested by the Israelis, but released shortly thereafter. A few months later they apprehended him again and put him in prison for several months. In 1989 he was arrested again, this time condemned to three years in prison.

In prison he learned fluent Hebrew, like so many other Palestinian prisoners, but this did not alter his resolve to fight the occupation.

At the same time, it remains unclear whether he regards the "occupation" as the regime which Israel established in the Gaza Strip and the West Bank in the Six Days War in 1967, or if he subscribes to Hamas' official position that Israel's very existence is an "occupation".

After serving his three-year sentence, Hanija was deported to Southern Lebanon along with around 400 other Hamas functionaries, activists and supporters. The Israeli government hoped that this would get rid of the "troublemakers".

It had the opposite effect, however: the deportees set up camp in Marj el-Zahour in South Lebanon, attracting the interest of the world media and assisted by "Hisbollah", a Lebanese Islamist organization supported by Syria and Iran.

After more than a year, Israel allowed the deportees to return. Hanija returned to Gaza, where he was made Dean of the Islamic University in 1993.

In 1997, after a failed attempt to assassinate Khaled Mashal, now one of the leading figures of Hamas, Israel had to agree to release Hamas leader Sheikh Ahmed Yassin after eight years of imprisonment. Upon his triumphant return to Gaza, he appointed Ismail Hanija as his personal assistant.

His close association with Yassin gave Hanija a high standing among Palestinians, but also put him at risk: Israel had begun to systematically eliminate Hamas leaders with "targeted killings".

In September 2003 Israeli helicopters bombed a house where Yassin and Hanija were staying, but managed to escape at the last minute.

Half a year later the Israelis assassinated Yassin, followed several months later by his successor Rantisi. Hanija went underground, becoming a member of the secret collective council of the Hamas, along with others from the Lebanon period.

Hanija's stance is moderate and pragmatic. As early as 1996 he argued that Hamas should participate in the elections, something he was only now able to accomplish. His probable aim was to integrate the organization into the PLO and gradually change its program and goals.

The overwhelming Hamas victory in January 2006 must have taken him by surprise too; as the top Hamas candidate, he had aimed for a share in the power, not the power itself. As so often in Ismail Hanija's life, things took a different turn, and now he is head of the Palestinian government.

Interview with Amira Hass
Peace Process as an Empty Phrase
Amira Hass is the only Israeli journalist who shares the day-to-day lives of the Palestinians she writes about. In this interview, she talks about her new book ("Gaza")and about the situation facing Palestinians who live in the occupied territories. Lennart Lehmann interviewed her

END_OF_DOCUMENT_TOKEN_TO_BE_REPLACED
Social media
and networks
Subscribe to our
newsletter