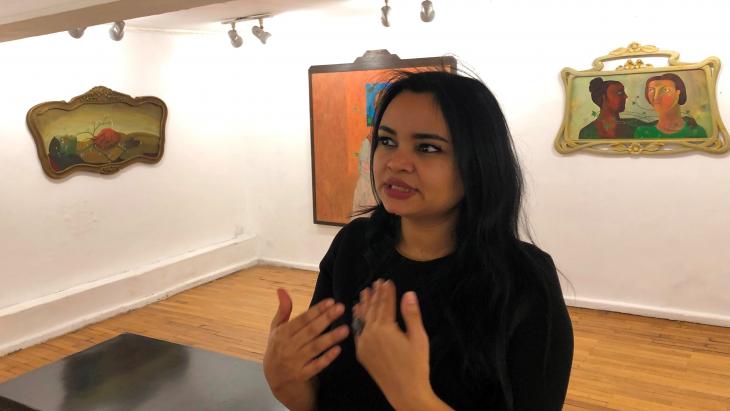 Portrait of the Egyptian artist Soad Abdelrasoul
Creating her own universe

With her "Virtual Garden" exhibition at the trend-setting Mashrabiya Gallery in downtown Cairo, the 45-year-old painter Soad Abdelrasoul has confirmed her place as one of Egyptʹs leading contemporary artists. By Mahmoud Saber

Abdelrasoul re-works themes of African figurative art – folkloric faces and the interaction between people, animals and plants, while simultaneously embracing the interior portraiture traditions of Europe, resulting in a re-imagination of the human form that simultaneously exposes private emotions and envelopes her pictures in mystery.

"I first began using drawing as way of self-expression when I was studying biology as a college student in Al Minya," says Abdelrasoul who frequently deploys an anatomically correct rendition of the human heart as a core iconographic element in her paintings. "I see myself as being on a quest to find something inside the creatures I am painting."

"As my work evolved I started adding botanical elements to biological ones, trying to combat the idea that human beings are more important than animals and plants," explains Abdelrasoul, when asked why tree branches, creeping vines, not to mention the faces and legs of animals make their way into her portraits. 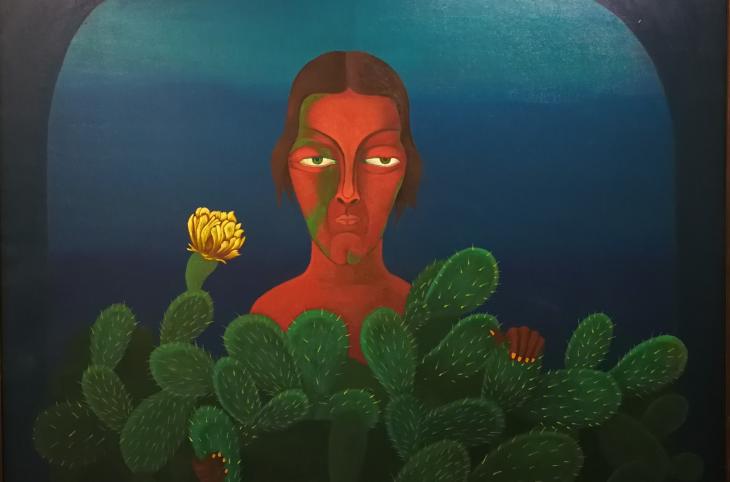 A process of artistic evolution: Abdelrasoul began adding botanical elements to her portraits with the aim of drawing the visual focus away from the human, while at the same time enhancing the overall effect. "The cactus flower is rare – I see its blossom as a sign telling her to carry on despite her pain and vulnerability"

Abdelrasoul earned her PhD in Modern Art History in 2012 from Helwan University and her work reflects a deep relationship with the technical, psycho-social and multicultural facets of contemporary painting. "Most of us start with a passion for drawing and I am connected to the tradition of realistic painting, since my studies concentrated on the main figures of European artists whom I respect and love."

"But once I began travelling to places like Kenya and Ethiopia, I started to see that, while as much as I had been attracted to the focus and forms of the European tradition, the bold, tough beauty of African art, including its textiles and sculptures, began working its way into my own painting – something you can obviously see in the wide eyes and even the skin colour of the figures I paint now." 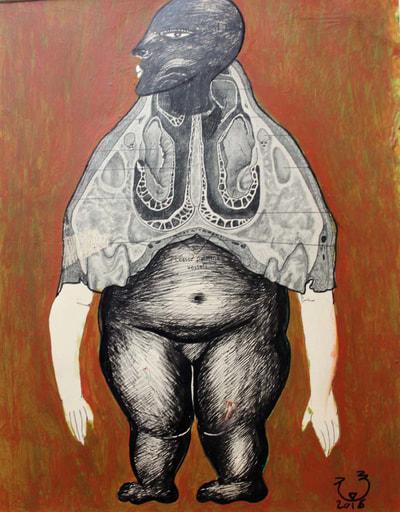 "I started to notice that women here begin and end the day in fear, fear of sexual harassment and everything else they encounter in the streets," says Abdelrasoul. "I realised it would be interesting to portray women from the inside as well as the outside – so I started drawing their lungs and their stomachs, trying to capture the fear deep inside them," explains Abdelrasoul

Mashrabiyaʹs director Stefania Angaro who had exhibited Abdelrasoul in several group shows at the gallery over the past decade decided last October to take her protege to 1-54, The African Art Fair in London.

"People were absolutely bowled over by her work. That she is Egyptian or female didnʹt enter the discussion – they were quite simply fascinated.”

Looking at life from the inside out

Yet clearly the Egyptian context is a core reference for Abdelrasoulʹs work. "In 2012, I started to notice that women here begin and end the day in fear, fear of sexual harassment and everything else they encounter in the streets," says Abdelrasoul.

"I realised it would be interesting to portray women from the inside as well as the outside – so I started drawing their lungs and their stomachs, trying to capture the fear deep inside them."

"We live in a society that discriminates against women. We grow up in homes that feed these ideas even while we as individuals are trying to find out who we are, pursue an education, not to mention take our place in institutions and relationships like motherhood and marriage, which are still constrained by traditional expectations."

Abdelrasoulʹs oeuvre and its capacity to both expose and obscure the setting of her painted subjects have won her the acclaim of Cairo peers and art critics alike.

"Soadʹs Virtual Garden is connected to realism, but at the same time creates a magical world," says fellow painter Samir Fouad, considered a doyen of the modern Egyptian art scene. "She pulls us into her paintings and makes us question whether art follows the logic of things as we know them, or whether it creates its own universe."

Soad Abdelrasoul's exhibition "Virtual Garden" can be viewed from 13 January to 14 February 2019 at Cairo's Masharabiya Galley of Contemporary Art.

Despite Syria's lengthy civil war, dictator Bashar al-Assad is now being courted by many governments in the Middle East as if nothing ever happened. The reasons for this vary. By ... END_OF_DOCUMENT_TOKEN_TO_BE_REPLACED

With authoritarianism once more gaining ground in the Middle East and North Africa, the European Council on Foreign Relations explores how European diplomats can be more effective ... END_OF_DOCUMENT_TOKEN_TO_BE_REPLACED

Abdul Fattah al-Sisi's National Human Rights Strategy smacks of the containment and sabotage tactics adopted by counter-revolutionaries during Egypt's 2011 revolution and its ... END_OF_DOCUMENT_TOKEN_TO_BE_REPLACED

Sudan is the exception to the rule in the United Arab Emirates’ counter-revolutionary playbook, writes James M. Dorsey. In contrast to Egypt or Yemen, where it went out of its way ... END_OF_DOCUMENT_TOKEN_TO_BE_REPLACED

Racism exists in the Arab world. People with dark skin are discriminated against and often see their rights curtailed. Activists have had enough of such treatment and are starting ... END_OF_DOCUMENT_TOKEN_TO_BE_REPLACED

General Abdel Fattah Al-Burhan has declared a state of emergency in Sudan and dissolved the Sovereign Council, which was made up of military personnel and civilians. What will now ... END_OF_DOCUMENT_TOKEN_TO_BE_REPLACED
Author:
Mahmoud Saber
Date:
Mail:
Send via mail

END_OF_DOCUMENT_TOKEN_TO_BE_REPLACED
Social media
and networks
Subscribe to our
newsletter