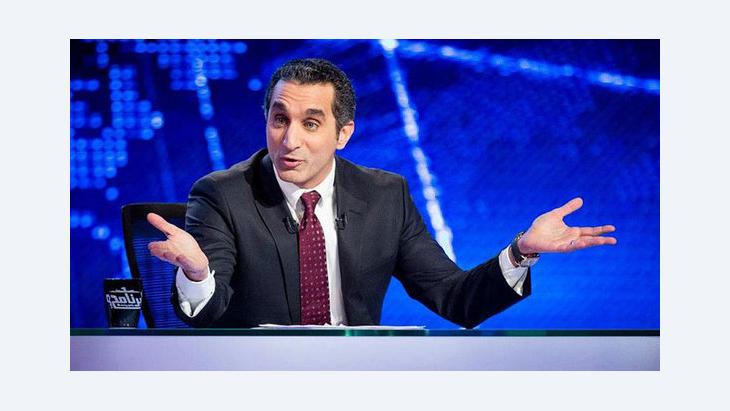 Fighting over the ''Pantie Revolution''

﻿The Egyptian TV satirist Bassem Youssef has cult status in his country thanks to his wit and biting criticism. Nothing is sacred for him, and so his enemies are always trying to drag him before the courts. By Joseph Croitoru

﻿The Egyptian TV satirist and coronary surgeon Bassem Youssef is without doubt among those who have benefited from the revolution. The show he started shortly after the uprising began, inspired by the American TV political satirist Jon Stewart, has catapulted him into the hearts of the Egyptian people.

Initially Al-Barnameg, or The Programme, was only distributed on YouTube, but his show was soon taken up by the private station ON TV. Last November, he moved to ON TV's competitor CBC.

Every Friday evening, the 38-year-old Youssef plays clips from Egyptian news stations and embellishes them with his own gags and comments. Nothing is sacred: neither Islamists or their secularist opponents are safe from his biting and hilarious criticism. Before the parliamentary and presidential elections, he made fun of several candidates, imitating them, sometimes with a false beard.

He recently caused a storm in both the religious and the secular camps when he joked about the very varied and often bizarre demands of the competing factions in the country. 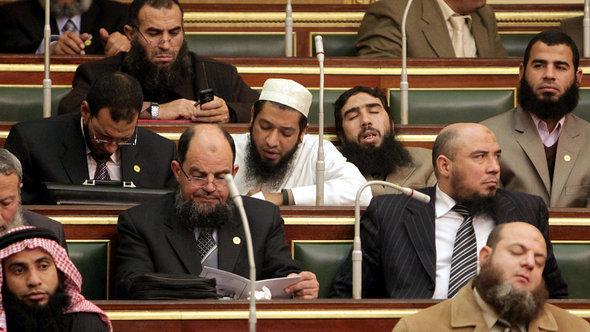 A short nap for an overworked parliamentarian. Youssef enjoys making fun of the political behaviour of the Salafists and has turned the religious hardliners into his enemies

​​One secular politician had said to camera while he was on Tahrir Square that it was about time that enough toilets were put up for all the demonstrators, and there should be a supply of fresh underpants. That inspired Youssef to a sketch which has reached cult status: he made fun of the extreme shortage of free underwear for the participants of the "million people protest".

In his bitter parody, he declared that the underwear was a political issue, and described the Egyptian mass uprising as the "Pantie Revolution". The live audience doubled over with laughter as Youssef proposed appropriate slogans and presented various models of "revolutionary undies".

The most applause came for a male model wearing a set with the slogan "Freedom". Youssef suggested it could also come in useful in an emergency as a banner or a flag.

On another occasion it was the Islamists who took offence when Youssef joked about their representatives' habit of wildly exaggerating the numbers at their demonstrations, talking about several millions. He played a news clip in which the presenter asked an official at a demonstration if it was really true that there were 10 million people there, as was being claimed. The official responded soberly that, no, there were at the most 50,000 present. Youssef commented sarcastically that he must have been talking about the number of people per square metre.

A thorn in the side of the Islamists

He regularly enjoys revealing the contradictions, confusions and nonsense behind some of the emphatically delivered pronouncements of the Muslim Brothers or the Salafists. That has led the Salafist TV preacher Sheikh Khaled Abdallah to describe him and his viewers as "homosexuals and atheists" – a comment which Youssef naturally satirised in his next show.

But the Salafists were even angrier when he criticised how religion was being instrumentalised ahead of the constitutional referendum. Now, Sheikh Abu Islam Abdallah – who became well known for his burning of the Christian bible in front of the US embassy a few months ago – wants Youssef's "insults" banned, and has been stirring up hatred against him on his Salafist TV station Al-Umma.

A number of religious extremists have also called on the Fatwa commission of the Al-Azhar University to issue a ban on his programme. It refused, on the grounds of freedom of expression, which, it said, had to be respected in Islam.

Although all attempts by the Islamists to silence Youssef have so far failed, it's now a lawyer from the other side who is trying to shut him up. Ramadan Abdelhamid al Uksury, who's in the leadership of the National Salvation Front, an alliance including the presidential candidate Mohamed AlBaradei, is well known for his readiness to go to court, and he has just brought charges against Youssef for insulting the president. 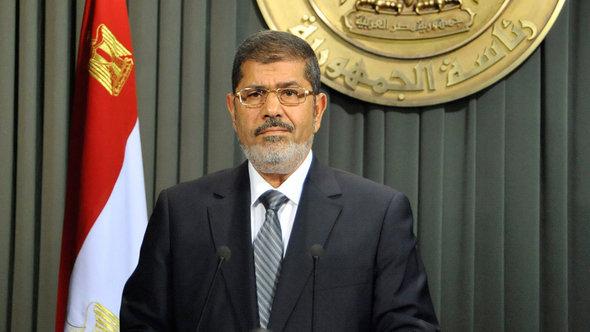 Morsi as cuddly president: the public prosecutor has announced that he's investigating charges against Youssef that he has insulted the president

​​President Mohammed Morsi is indeed a regular butt of the show. Youssef has made fun, not just of his rhetoric of brotherhood, but also of his self-presentation as beloved father of the nation. Recently, Youssef asked rhetorically "Is Morsi a dictator?" and showed pictures of "real" dictators like Stalin, Mussolini and Hitler. Then he suddenly pulled out a red pillow with Morsi's face on it: Morsi, he was implying, is evidently a cuddly president, with a truly calming influence: "My daughter just has to lay her head on this pillow and she's off to sleep in an instant."

For al Uksury, the "presidential pillow" is enough to justify the charge of insulting the president, which, he says, could also be proved easily from other incidents. The Egyptian public prosecutor has taken up the case, and that has led Youssef's Islamist enemies to press charges as well.

In these, Youssef is not just accused of a range of offences against the Muslim religion; he's also said to be threatening social peace in the country. This is another version of the accusation brought by his Salafist opponents that his satirical sketches incite "fitna", or war, between Muslim brothers.

Now Muhammad Hassan Abu al Ainin, legal counsel to the Muslim Brothers, has joined the queue: last week he brought charges of insulting the president, not just against Youssef, but also against the head of the TV station CBC and even against the satellite operator Nil Sat which transmits the programme. A court in Cairo has rejected his call for the programme to be taken off the air immediately. But similar legal challenges are likely to follow.

Two refugees detained in Egypt are facing deportation to Eritrea. The expulsion of the Eritreans, who have been incarcerated in Cairo for more than eight years, has been halted ... END_OF_DOCUMENT_TOKEN_TO_BE_REPLACED

International relations are shifting across the Middle East as regional powers adapt to America's retrenchment and China's growing influence. Although the region could become the ... END_OF_DOCUMENT_TOKEN_TO_BE_REPLACED

Germany's foreign policy is explicitly values-based. But what happens, Ralf Bosen asks, when democracy, the rule of law and human rights collide with the logic of trade and ... END_OF_DOCUMENT_TOKEN_TO_BE_REPLACED

Egyptian author Nadia Wassef talks about opening the first independent bookstore in her home country; and her latest book in which she celebrates books and booksellers. By Manasi ... END_OF_DOCUMENT_TOKEN_TO_BE_REPLACED

"The people aren’t ready for democracy" has been the constitutional basis for Arab tyranny, its favourite slogan and its sacred narrative for more than a century. Yet, asks Khaled ... END_OF_DOCUMENT_TOKEN_TO_BE_REPLACED

END_OF_DOCUMENT_TOKEN_TO_BE_REPLACED
Social media
and networks
Subscribe to our
newsletter