Skip to main content
Portrait of the Footballer Fatmire Bajramaj

From Refugee to World Champion

Fatmire "Lira" Bajramaj is the superstar of German women's football. The young Muslim shot goals on a TV sports show in high heels, wears makeup on the pitch and is active in integration projects. She recently published her biography at the tender age of 22. By André Tucic

Fatmire "Lira" Bajramaj is the superstar of German women's football. The young Muslim shot goals on a TV sports show in high heels, wears makeup on the pitch and is active in integration projects. She recently published her biography at the tender age of 22. By André Tucic 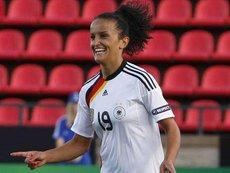 ​​ Fatmire Bajramaj is the carefree young face of women's football in Germany. A Muslim Kosovan, her eventful life story recalls the hit English film Bend it like Beckham, in which a girl footballer strikes out against ethnic prejudices and her family's reservations. "Lira", as she is known, fled from the Kosovo with her family, landed up in Remscheid, moved to Mönchengladbach and began playing football there secretly against her father's will. "He wanted me to do ballet, he said football was only for men," says Lira Bajramaj.

She started out kicking a ball about in the park, but when she realised she had something to offer on the pitch she signed up to the women's team at FSC Mönchengladbach, soon moving on to the more ambitions DJK/VfL Giesenkirchen. At some point her family found out, but she managed to convince her father to watch her play. "He's been my biggest fan ever since," she says with a grin.

At the tender age of 16 she started receiving enquiries from national league teams, joining FCT Duisburg in 2004 and playing her debut match for the German national side a year later. She has since played in 35 international matches, scoring six goals – probably the most important her two balls in the net in the third place playoff at the 2008 Olympics against Japan.

That was her definitive breakthrough, with a television audience of millions watching her tricks and turns in the midfield. Since the start of this season she has been kicking for 1. FFC Turbine Potsdam, trying for the coveted spot at the top of the German women's league. Her list of successes is impressive enough as it is: U19 European champion, UEFA Cup and DFB Cup winner, Olympic bronze, world and European champion.

Despite her young age, Lira Bajramaj has experienced a great deal. Enough to fill the pages of her biography Mein Tor ins Leben – vom Flüchtling zur Weltmeisterin (My Goal in Life – from Refugee to World Champion), published in October 2009. The book tells the story of how she was born and grew up in Gjurakovc, at the very heart of the Kosovo conflict. When the Serbian attacks on Kosovans intensified in 1992, her parents fled to Germany with five-year-old Lira and her two brothers. 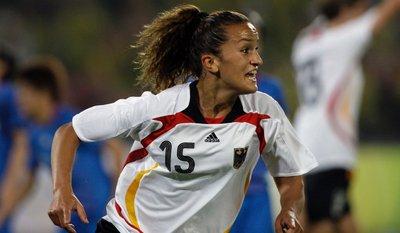 Tricks and turns in the midfield: "First and foremost I want to win, but I want to look good doing it," says Bajramaj

​​ The Bajramajs left their farm, had to bribe Austrian customs officers to cross the border and ended up with relatives in North-Rhine Westphalia. They could not stay there long, however, being transferred to an asylum-seekers' home. Her father found work as a builder in Mönchengladbach and the family moved into a small flat in the city famous for its football team.

"I want the public to find out how hard it is for refugee children to integrate in Germany. Only sport helped me find friends. I hope my book will encourage young women from ethnic minorities to take the same path," says Bajramaj. She heard more than her fair share of racist comments in the playground, only managing to earn respect on the football pitch – sad but true. "That was when they stopped making stupid comments," she remembers.

No pork, no Ramadan

Germany is her new home, the place where she made it big. Yet Lira Bajramaj still has close links to her old country. Her parents and brothers live in Mönchengladbach, with the rest of the family in Kosovo. They visit their relatives once a year, pleased to be there but equally happy to return to Germany. Lira does not want to sever her roots though, which includes living out her Muslim faith – albeit in a moderate form.

​​ "I pray before I go to sleep, before car journeys and matches. But I don't wear a headscarf, I like wearing make up and I go to parties." Pork is taboo for Lira, but Ramadan is too. "I can't afford it as a sportswoman," explains Bajramaj. She is a very ambitious woman – so much so that she even dropped out of her training as an assistant tax advisor when it was clear she would make it as a footballer. Since then she has gone flat out to be in top form.

And she has to – she has set her sights high for this year: "First I want to win the championship with Potsdam, then I want Germany to be world champion, and then I'd like to have children," she says.

It's not just her plan to have children during her career that makes her a prime example of a modern woman footballer. Many people still imagine women players all have short hair and stocky legs. One reason why she enjoys playing with her image as a "girlie" – often wearing makeup on the pitch, playing in pink football boots in last year's DFB cup final and shooting goals in high heels on a TV sports show.

"First and foremost I want to win, but I want to look good doing it," says Bajramaj. But she has more to offer than her looks – she has a big heart too. She has been an ambassador for the children's charity World Vision and will soon be sponsoring a child. At the beginning of this year she was made an ambassador for the European Year for Combating Poverty and Social Exclusion.

For the German Football Association president Theo Zwanziger, she is a shining example of successful integration. He likes taking her along to PR appointments, visiting schools with large ethnic minority communities for example. "I enjoy it – it's an honour for me to be a role model," says Bajramaj.

Zenab El-Khatib
Headscarf Pioneer
Zenab El-Khatib is just 15 years old, but is already heralded for her pioneering role. After all, it is still unusual to see a woman running for a goal while wearing a headscarf. But not for Zenab and the Danish U-16 national football team. A portrait by André Tucic

International Ladies' Soccer Team Berlin
"You Can Play Football Wearing a Headscarf If Necessary"
They still encounter rejection and prejudice now and then, but their enthusiasm for sport knows no bounds. Eighteen female soccer players from six different countries train for the Turkish club "Al Dersim Spor". By Ariana Mirza

END_OF_DOCUMENT_TOKEN_TO_BE_REPLACED
Social media
and networks
Subscribe to our
newsletter