Shirin Neshat is probably Iran's best-known artist. In her suggestive, mythologically charged photographs and films, she often deals with gender differences in the Islamic world and, as a result, is frequently accused of using clichés. By Amin Farzanefar

Photograph from the series "Women of Allah" by Shirin Neshat

​​Shirin Neshat's international breakthrough came in 1994 at the age of 37. Her film Women of Allah / Guardians of the Revolution (1993) was heavily laden with conflicting references.

Arabic characters were superimposed on the faces, hands, and feet of young Iranian women, evoking associations of the henna ornaments that are applied for weddings. The guns which these inscrutably serious women (including the artist herself) held or pointed at the viewer overcame and amplified this impression of the cliché of the menacing female revolutionary.

Women of Allah could also be interpreted differently across cultural boundaries; to the Western audience, the characters appeared to be purely graphic decoration, whereas those who were able to read the inscriptions recognized texts by feminist authors.

In fact, Neshat's art originates exactly at the dividing line between the strange and the familiar.

Born in Qazvin in 1957, she left Iran at the age of 17, has lived in the US since then, and returned to the Islamic Republic for the first time in 1990 to take a look at conditions in the country after the revolution.

There she encountered a completely different society, characterized by Islamic laws and segregation of the sexes and traumatized in the aftermath of the eight-year war with Iraq. From then on, this was to have a profound influence on her art. 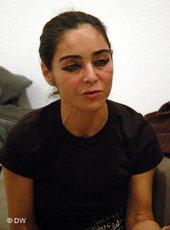 Since the 1990s, Neshat has been represented at all the major international art events

​​Her work derives its effect from oppositions. In her videos, films, and installations, she contrasts narrowness-width, black-white, light-dark, and loud-soft with each other, harshly and abruptly. The clear-cut separation of the image spaces – her works are often projected on two divided screens – thus corresponds with the spatial segregation of genders.

Again and again, she examines the unequal distribution of power, visibility, and status against the backdrop of conditions in Iran. In the film Turbulent (part of a trilogy also including Rapture and Fervor), a man sings in front of an audience, while nothing but inarticulate, guttural sounds are heard from the throat of a woman.

In an extended camera movement, Pulse (2001) shows a woman in the semidarkness of a nostalgically furnished basement apartment, crouching next to a radio and humming along with a melody. Underlaid with pulsating noise, this tableau becomes a disturbing experience of domesticity, nostalgia, captivity, and isolation.

Similarly open to interpretation is Possessed, also in black and white. Here the camera follows a breathless woman through the narrow streets of the old section of an unnamed city until she ultimately finds herself on a crowded square, where she is the focus of attention and stares. An exile's nightmare about her homeland? The depiction of the feminine perspective within a patriarchal society?

Passage, from the same year, offers other contradictions in addition to gender contrasts: life, death and rebirth, water and earth. At the shore, we see a group of men, filmed at a distance, carrying a coffin inland to women who are sitting in a circle, digging a hole. Finally, the mourners are surrounded by a blazing wall of fire. Passage shows an initiation, albeit of destruction.

Darling of the international art market

Many of Neshat's works were filmed in Morocco and Turkey, and they all take place in an imaginary Orient populated by an indistinct, faceless community. Their barren dreamscapes are of archaic force and visual power, but for that very reason they often come dangerously close to clichés and stereotypes that have been in need of complete revision in Iran since the Khatami era, at the very latest.

In any case, the international art market loves Neshat – since the 1990s, the New Yorker has been represented at all the major international art events, and her photos continue to grace the covers of numerous magazines.

Thus, she is Iran's chief female representative; there is little room for the Iranian women's movement, which, despite all adversities, is strong and active – neither in Neshat's art nor alongside her.

Younger artists who convey a realistic, varied, and contemporary image of Iran seem to be having a difficult time, given the omnipresence of the 50-year-old Neshat. But does she want this privileged status? Is the exclusion of younger artists not due primarily to Western expectations of Eastern art?

What makes Shirin Neshat's work a profoundly intense experience, in spite of such objections, is its very indefiniteness; through her use of vague, ambiguous symbols and archetypes, the atmospheric element still conceals any message.

New Exhibition of Contemporary Art in Teheran
Unusual Images for for the Islamic Republic
For years they wasted away in the basement of the Teheran Museum for Contemporary Art. The paintings of well-known artists of the twentieth century had long ago been deemed "Western works of the devil" by the Mullahs. Now they have been recovered from their hiding place and put on display at the museum. Martin Ebbing reports from Teheran

Marjane Satrapi
East Is Not East, West Is Not West
In the cartoon novel "Persepolis," Iranian illustrator Marjane Satrapi has created a sensation with the story of her childhood in Iran. The book has been translated into several different languages and has met with enthusiastic acclaim. By Petra Tabeling

END_OF_DOCUMENT_TOKEN_TO_BE_REPLACED
Social media
and networks
Subscribe to our
newsletter