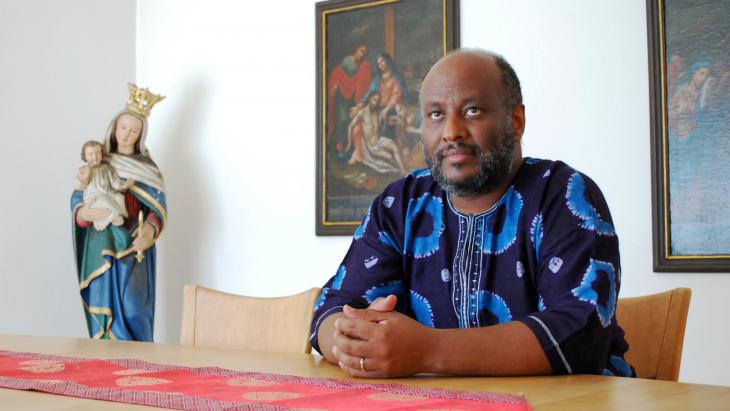 The feisty Catholic priest Mussie Zerai is a staunch advocate of the rights of refugees in Italy and has already saved countless lives. A candidate for the Nobel Peace Prize, he is known as the "refugees' guardian angel". Many refugees simply call him "Father Moses". By Andrea Backhaus

The call for help came from a plastic boat. A hundred people lay packed together inside as water seeped in through a leak in the bottom. Under the weight of its many passengers, the small vessel, built for ten people, was sinking ever deeper below the waterline. By the time Mussie Zerai was able to notify the Italian coastguard, the boat was already half full of water.

Fortunately, the rescuers arrived on the scene in time. Last weekend they retrieved more than 3,000 refugees from 18 boats on the Mediterranean. Many of these people owe their lives to Mussie Zerai. Like thousands before them.

It's a warm August morning. Mussie Zerai, 40, with deep voice and grey-flecked beard, drops into a chair in the parish meeting room and rubs his eyes. It is pure despair that is driving people onto the boats, he says. "They just want to live, even at the risk of dying in the process."

Zerai looks exhausted. He is only staying in Erlinsbach, a village in German-speaking Switzerland, for a few days. From here, the pastor, who fled to Europe from Eritrea in 1992, looks after 6,500 of his Catholic countrymen on behalf of the Vatican. But he spends most of his time on the road. He visits refugee camps in Ethiopia and Italy, speaks at UN conferences, debates on asylum policy, meets MEPs in Brussels.

His tenor is always the same. "All these people want is a chance," he says. To make sure they get it, Zerai is constantly on the alert. Because his number is the last hope for many boat people.

In 2003 Zerai received his first calls for help from refugees in trouble on the Mediterranean Sea. It all started when a journalist reporting on the plight of Eritreans in a Libyan prison contacted Zerai by phone.

One the refugees later scribbled his phone number on a prison wall. "Call here if you're in trouble," was written beside it. The number quickly made its way through the camps inhabited by Muslim, Orthodox and Christian refugees from Eritrea, Somalia, Ethiopia, through the Libyan torture prisons, and among Syrians who set off from North Africa on the risky voyage to Italy. 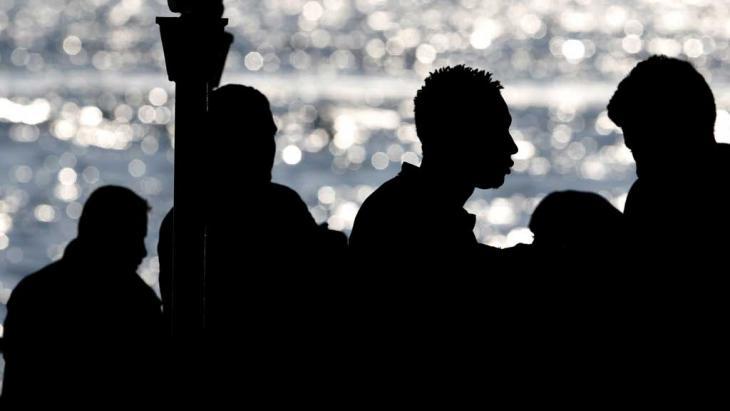 "We keep telling people in the North African camps how dangerous the crossing is," reports Father Zerai. According to the UN Refugee Agency (UNHCR), around 224,000 refugees have crossed the Mediterranean to Europe since the beginning of the year. And more than 2,100 lost their lives on the dangerous voyage.

Ever since then, Zerai's phone has been ringing almost non-stop. When boatloads of refugees threaten to capsize or asylum seekers to die of thirst, they call him on a trafficker′s satellite phone. Zerai notes the boat's position and forwards the data to the Italian coastguard, which organises help.

According to the Italian authorities, Zerai has already saved several thousand lives. The candidate for the Nobel Peace Prize is therefore known as the "refugees' guardian angel". Many refugees simply call him "Father Moses".

Committed to the rights of refugees

Zerai was born in 1975 in Asmara, today the capital of Eritrea. His mother died when he was five, and his father was abducted by the secret police, so his grandmother took care of Zerai and his siblings. At 16, he fled to Rome, where he met a British priest who helped underage refugees with their asylum applications. Zerai translated for him and came into contact in this way with the Scalabrinian Missionaries, a Catholic order of brothers and priests who provide support for refugees and migrants.

Zerai studied for three years in the hometown of the order's founder and then spent seven years in a Scalabrinian mission in Rome. He met Africans there who had fled their countries and now lived on the street, with neither job nor residence permit. Zerai organised protest marches and began to publicly criticise European asylum policy.

In 2006 he founded the organisation "Agenzia Habeshia", which advocates for the rights of refugees. Zerai speaks at memorials for refugees who died while crossing the sea, talks on Italian television, and appeals to relief organisations to help bring those responsible for shipwrecks to justice.

And he tries to dispel prejudice. "Many Europeans do not understand what these people are fleeing from," says Zerai. So he gives lectures at schools and universities. He talks about how in his own country of Eritrea, which is considered one of the world's most brutal military dictatorships, young men are forced into lifelong military service, and torture and arbitrary violence are the order of the day.

He reports on how people who are longing for freedom often set off on foot to Sudan, Egypt or across the Sahara, and onward to Libya, a journey that can take several years. He also talks about the bombs in Syria, about looting and destruction. 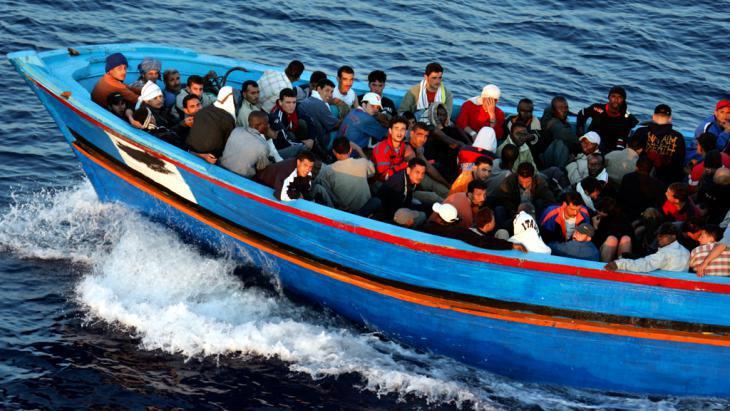 Pleading for a change in the EU's restrictive refugee policy, he notes: "The refugees have often left everything behind. They can't get a visa because they don't have the necessary documents." This means they have no choice, he says, but to take up the offers of the traffickers, who are interested only in money and not in protecting the refugees' lives. The EU is thus playing into the hands of criminals whom it is ostensibly trying to fight.

"The refugees are not your enemies," he tells the audience. "They need your help." He regularly meets with inhabitants of the affected municipalities and with Muslim and Christian refugees. They all sit down at a table together and discuss Islam, faith and Jesus. As a Christian, Zerai tries to make it clear that Islam is by no means a radical faith. And that some people are using the religion as a pretext to justify violence. And he tells people that the refugees want above all one thing: peace.

Zerai resents allegations by some critics that his help only encourages more refugees to undertake the dangerous trip across the Mediterranean, aiding and abetting the traffickers. "We keep telling people in the North African camps how dangerous the crossing is," he says. "They reply, 'We at least have to try.'"

Because he's afraid of missing calls while leading mass or performing a baptism, Zerai hired assistants all across Europe several months ago to take calls on a second hotline number around the clock. But emergency calls still often wake Zerai in the hours before dawn. "I'll get help," he then says in his quiet voice. "Be patient!"

Under "Mare Nostrum", the operation founded by the Italian navy and coastguard after a cutter with 400 people on board capsized before Lampedusa in October 2013, it often took only three hours to track down a boat, he says. But since the rescue programme was replaced by the EU's "Triton" mission, operated by the Frontex border agency, it can take two to three days. The rescuers often don't have the capacity to search for the boats, says Zerai.

The pastor is convinced that the number of people losing their lives while crossing the sea will increase dramatically if the EU doesn't change its restrictive policy. "The refugees have often left everything behind. They can't get a visa because they don't have the necessary documents."

This means they have no choice, he says, but to take up the offers of the traffickers, who are interested only in money and not in protecting the refugees' lives. The EU is thus playing into the hands of criminals whom it is ostensibly trying to fight. It is his duty as a Christian and as a human being to take care of his fellow men, says Zerai, standing up. "I can't save them all. But I will save as many as possible."

Two refugees detained in Egypt are facing deportation to Eritrea. The expulsion of the Eritreans, who have been incarcerated in Cairo for more than eight years, has been halted ... END_OF_DOCUMENT_TOKEN_TO_BE_REPLACED

Blending East African, Bollywood and Arab music traditions, Groupe RTD's "The Dancing Devils of Djibouti" is not only a stunning album, it is also the first internationally- ... END_OF_DOCUMENT_TOKEN_TO_BE_REPLACED

A team of investigative journalists involving the Deutsche Welle have discovered that German weaponry and tech play a far greater role in the Yemen conflict than previously ... END_OF_DOCUMENT_TOKEN_TO_BE_REPLACED

Ethiopia and Eritrea didn't pen their peace agreement in Addis Ababa or Asmara, but in Saudi Arabia with the Emirates alongside. Are economic and military interests increasingly ... END_OF_DOCUMENT_TOKEN_TO_BE_REPLACED

How do authoritarian regimes respond to EU initiatives to stem migration? A recent publication by the German Institute for International and Security Affairs (SWP – Stiftung ... END_OF_DOCUMENT_TOKEN_TO_BE_REPLACED

The EU claims that the migration pact with Africa is a completely new initiative. Rather than reshaping patterns of migration, however, Europe′s desperate politics of symbolism ... END_OF_DOCUMENT_TOKEN_TO_BE_REPLACED
Author:
Andrea Backhaus
Date:
Mail:
Send via mail

END_OF_DOCUMENT_TOKEN_TO_BE_REPLACED
Social media
and networks
Subscribe to our
newsletter