The Syrian philosopher Sadiq Al-Azm is one of the highest-profile and most strident critics of the Arab world. To this day, his ideas are between all fronts, making him enemies of both Islamist and secular dogmatists. Sadiq Al-Azm is soon to celebrate his 75th birthday. A portrait by Kersten Knipp 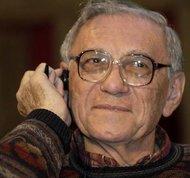 The Six-Day War, the fatwa against Salman Rushdie, the Iraq War and Islamist fundamentalism: Sadiq al-Azm has barely missed a chance to dive headfirst into a debate over the past 40 years

​​There are no doubt numerous advantages to coming from the upper echelons of Damascus society. One of these is dealing first and foremost with worldly realities, seeing the metaphysical as secondary.

This type of equation is an incredible relief – not only because it means the world can be measured and calculated, but also because it offers protection from intellectual neurosis. And neurosis, the Syrian philosopher Sadiq Jalal Al-Azm tells us, was extremely widespread among would-be intellectuals in the 1940s and 50s.

It was easy enough to succumb; all it took was to have read religious literature – and then come across secular works from the West. The result was a culture shock to beat all culture shocks.

Whatever happens in our lives, the religious books taught, is dependent least of all on human influence. "This is how God wanted it" was the explanation for almost everything on earth: good and evil, positive and negative, in politics and society as in private life, among family and friends.

For many in his generation, the idea that this might not be the case was a huge impertinence.

Al-Azm tells us this in his recently published book Ces Interdits qui nous hantent ("The bans that haunt us"), a 2008 collection of essays and autobiographical writing.

He himself, however, was fortunate enough to grow up in an upper-class household, where there was no room for ideas of God's influence on the ways of the world.

You had to take things into your own hands, the young Al-Azm learned – and then take responsibility for them. Your mistakes have nothing to do with God; and don't listen if the priests tell you otherwise. 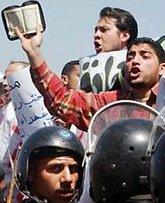 "Your mistakes have nothing to do with God; and don't listen if the priests tell you otherwise." Muslim Brotherhood activists in Cairo, Egypt

​​"These circumstances" he notes, "protected me from the spectres of psychological and spiritual crisis, which might have seized me when I began to develop an interest in pan-Arabism and nationalism, ideas that were very widespread during my early youth."

Others experienced the political and cultural upsurges of the 1940s and 50s with less composure. For them, these years meant an absolute breakaway from all they had learned, all they had considered self-evident to that date.

The new theses may have been convincing. But above all they were – at least initially – shocking. Many of his friends found themselves in deep existential crises, writes Al-Azm.

The new ideas were incompatible with the old ideas, the gulf between them so deep and wide that it was nigh impossible to build bridges between them. "I knew cases in which that led to nervous depression or complete renunciation of active life."

Some ideas were simply too radical not to prompt shudders in those that came across them. As foreign and strange as they were, it took time to digest them. At some point, however, people could follow them after a while. "Most people I knew overcame their crises, turning to more progressive ideas from then on."

The story that Al-Azm merely hints at in his book may give us a clue to the circumstances surrounding the birth of secular thought in the Arab world – circumstances that occasionally caused problems.

The fact that Al-Azm was not familiar with these problems from the outset may have led him to couch his critique of the Arab world in such drastic terms, stopping at nothing and no one, and encountering even the allegedly most progressive movements of his time with deep distrust.

What, for example, asks Al-Azm, was Arab nationalism? A reaction to European colonialism and an attempt to unite the Arab states? Absolutely. At least that was one aspect to the phenomenon. 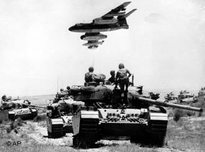 The Israeli army on the Sinai: almost overnight, the Arab defeat in the Six-Day War devastated all high-flying plans and the belief in a secular future

​​But presumably, he writes, it was something else too: an attempt to regain the role of a major power lost centuries ago. Arab nationalism, writes Al-Azm, was only ostensibly a freedom movement. In actual fact it strove for a place on the world stage.

High ambitions that were not fulfilled, however – and had grave consequences: "And so the grand illusions were born, the infinite inferiority complexes, huge compensatory fantasies, a derring-do spirit of adventure, irresponsible politics and more recently terrorism on a grand scale, to which the whole world has grown accustomed."

Yet the situation is paradox: according to Al-Azm, the very failure of Arab nationalism is responsible for this development – a failure that can be dated very precisely to June 1967, the time of the Six-Day War between Israel and an alliance of various Arab states led by Egypt.

Almost overnight, their defeat devastated all high-flying plans and the belief in a secular future. "And this gap," Al-Azm said in an interview, "was filled by the religious hardliners. Islam was the only answer that could fill the resulting vacuum."

This movement was by no means spontaneous, however. It had powerful patrons behind it: "Financial sponsors from Saudi Arabia and other Gulf states immediately supported the Islamists, who occupied more and more of the public space from then on."

Statements such as this place Sadiq Al-Azm between all fronts, both the Islamist and the secular. He has no friends on either side, at least not among those with political influence. 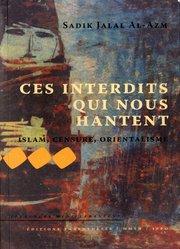 "Stopping at nothing and no one": Cover of Sadiq Al-Azm's Ces Interdits qui nous hantent - Islam, censure, Orientalisme (2008)

​​When he signed the Beirut-Damascus Declaration in the spring of 2006, calling upon Syria to withdraw from Lebanon, he escaped arrest only because he was not in the country. From Beirut, where Al-Azm spends most of his time, he then made cautious enquiries via middlemen as to whether he might dare to visit Syria.

To his great fortune, things settled down and the coast was clear again in Damascus at some point.

Al-Azm is a phenomenon in the Arab world. There are few intellectuals who criticise their region of origin as sharply as he does. The Six-Day War, the fatwa against Salman Rushdie, the discussion on Edward Said's book Orientalism, the Iraq War and Islamist fundamentalism: he has barely missed a chance to dive headfirst into a debate over the past 40 years.

He doesn't give Islamism much longer to live. But he also predicts an insidious decline for Islam itself, similar to that which Christianity has been through in Europe. His distance to religion already brought down a fatwa on him in 1970, declaring him an atheist – a title of honour for Al-Azm – but not inciting violence against him.

One thing that has protected him against all manner of wrongs and injustices, he says, is his family background. The name of Azm goes a long way in Syria. And the sharp thinking he learned from his family has so far remained without unpleasant consequences. Another of the advantages of coming from the upper echelons of Damascus society.

Interview with Sadiq al-Azm
"Democratisation is a Gradual Process"
Qantara.de interviewed Sadiq Jalal al-Azm, one of the most prominent Arab intellectuals, about democracy in the Arab world, and about the stance Arab intellectuals take towards authority

Essay: Sadiq Al-Azm
The Fight over the Meaning of Islam
The Syrian intellectual Sadiq al-Azm proposed Self-Criticism after the Defeat to the Arabs in 1968, and in the following year a Critique of Religious Thought. He sees a third way for the Muslim faith between radicalism and state Islam

END_OF_DOCUMENT_TOKEN_TO_BE_REPLACED
Social media
and networks
Subscribe to our
newsletter