Finding the Source of Misfortune in the Past

Schahriar Mandanipur has brought a new perspective to Iranian literature. His characters often find themselves confronted with extreme situations, thus being forced to grapple with existential issues. A portrait by Bahman Nirumand 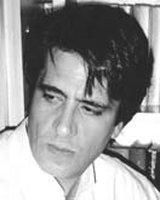 In Mandanipur's stories, tradition is always an ambivalent factor – it can be destructive, but it may also be a precondition for renewal and creativity

​​Schahriar Mandanipur was born in 1956 in South Iranian city of Shiraz, the birthplace of the great poet Hafiz. He studied political science and as a student he took part in the popular uprising against the Shah's dictatorship.

During the Iran-Iraq War (1980-1988) he volunteered for the front, where he spent eighteen months living in the trenches and on the battlefields, leading an existence between life and death.

After returning from the front he met the popular writer Huschang Golschiri, whose criticism and praise gave him the courage to publish his first short story in the literary magazine "Mofid". This seems to have put an end to his inhibitions.

Since 1989 he has published a two-volume novel, nine story collections and numerous essays on literary and social issues.

Between life and death

The atmosphere of Mandanipur's stories is hazy and enigmatic. The reader has a vivid sense of what is at stake, but still ends up groping in the dark.

The temporal planes interweave, the past overtakes the present, tradition and modernity clash, fusing to form a mixture in which the characters wander, driven by fear and loneliness, fighting for their lives. Incapable of living normally, they move on the border between life and death.

All attempts to interpret Mandanipur's stories from a political, social or moral perspective are doomed to failure because the characters do not move within a fixed framework. They are actors in a contradictory world which tolerates no harmony, a world on the brink of disaster.

Only one story in German

"Smash the Stone Teeth", from the collection "Moomia wa assal" (Mummy and Honey, 1997) for instance, features two main characters and several minor ones. However, the reader directly encounters only one woman, and learns nothing specific about her, not even her name.

She is the fiancée or beloved of a man whose voice is heard only in the letters he receives from him. These letters make it clear that the man has been sent to the village of Gurab to do community work as an alternative to military service.

In the village, mud huts are connected by an underground passageway. The inhabitants suffer from afflictions of the eyes, and when the dusty wind gets down their throats, they spit blood. The men sit by themselves in the shadows of their huts, smoking hookahs, occasionally whispering to themselves, constantly staring at the road.

The atmosphere is eerie. Poverty, neglect and mistrust have driven the villagers to the brink of madness, infecting the profoundly lonely young man. He flees into a catacomb.

Here he discovers a millennium-old tradition. Standing amidst the walls, he hears the dripping of water and a whispering that has gone on for more than a thousand years. He discovers wall paintings and a stone man: symbol of a petrified culture und tradition which is reflected in the villagers' unchanging habits. Even the sparse grain "grows out of thousand-year habit".

The curse of the past

The stone man is impaling a beast with a sword. "The paleness in the corners of his eyes gave them a pleading expression," the young man writes in the last letter.

"They said: 'Strike', so I took a stone and knocked his teeth in, I did just what he had wanted for the past thousand years. (…) I struck again and again, stone after stone crumbled and fell down, and then there was darkness and the terrible noise of the water."

The past is the source of misfortune. It must be shattered "stone for stone". The people must suffer great torments before a new epoch can be born, the world must burn so that the dry, exhausted soil can become fertile again.

As in other stories by Mandanipur, tradition, the old culture that seems a thing of the past, plays an ambivalent role. It can act destructively in the present if it is used as an instrument of oppression or a source of superstition, but it can also lead the way to a new future, a rebirth, if it is approached productively and critically.

Another of Mandanipur's subjects is the curse that afflicts individuals, families or entire societies. This theme is reflected in most of the stories in the collection "Moomia wa assal" (Mummies and Honey), and most vividly of all in the novel "Del-e deldadegi" (The Risk of Love, 1998).

The novel describes the devastating effects of natural disasters, in this case an earthquake, and war. The earthquake is a curse which befalls people unexpectedly, while the war is a catastrophe for which the people themselves are to blame. But the author, who has experienced both first-hand, withholds his judgment.

"Salome" (Salome), from the collection "Schargh-e banafscheh" (The Violet Orient, 1999), tells the story of the love between an Englishwoman passing through Iran and an Iranian tour guide. The story is also an encounter between the Orient and the Occident.

The stories in the collection "Abi-je mawara-je bahar" (The Blue Beyond the Seas, 2003) were inspired by the events of September 11, 2001. The eleven stories describe individual fates; terrorism fits into a chain of natural disasters and wars.

In an epilogue the author tells how, as an Iranian writer, he was tormented by constant nightmares. He experienced the war, the terrible earthquake in Rudbar in Northern Iran, and finally a man's voluntary leap from a skyscraper on September 11.

For Mandanipur, writing was the only way to save himself from the horror of September 11 and the nightmares following the mass murder. But it was hard for him to find words for the fates of people who lived far away from him, and he asked himself what the victims on the other side of the world had to do with him and his own suffering.

The attacks on New York and Washington were the beginning of a new era, believes Mandanipur. A fundamental change took place, but people "were unaware, or did not want to be aware of it", he writes. Human dignity was destroyed, and a social contract, a law was suspended.

Mandanipur offers no solution; he provokes, shakes and infuriates the reader, often making one want to tear the characters out of their lethargy and encourage them to withstand the strokes of fate.

Qantara.de
West- Eastern Divan
Writers from Germany and the Islamic world are brought together through an ambitious project. The Libanese Abbas Beydoun and Michael Kleeberg from Germany were the first two to meet

END_OF_DOCUMENT_TOKEN_TO_BE_REPLACED
Social media
and networks
Subscribe to our
newsletter