Hindi Zahra is the new face of a young generation of emancipated, cosmopolitan songwriters in North Africa. Her album "Handmade" is due to be released in late February. Stefan Franzen caught up with Hindi Zahra in Paris

Magical, poetic and unique soundscapes: "Handmade," the album by 30-year-old French-Moroccan singer, Hindi Zahra, brings together a fascinating potpourri of the most diverse musical genres

​​Born in Khouribga in southern Morocco, she describes herself as an inveterate nomad: "From the time I was a small child I was out on the road with my parents and coming into contact with the whole spectrum of Moroccan music every day, everything from the songs of the Berber women and Gnawa chants to rock. The music of the Tuareg, too, Egyptian music and Bollywood was something I had a particular soft spot for."

Behind all of these influences it was the voice of her mother that provided the underlying melody. Among the Berber, singing has always been the preserve of the women and every family has a least one female member who sings.

Zahra is clearly moved as she explains that her background has given her a great deal of female, "intimate and powerful," self-confidence. So it is no surprise that all of her idols are female singers: Ella Fitzgerald, the great Egyptian diva Oum Kalthoum, and the exotic and amazing voice of Peru's Yma Sumac with its five-octave vocal range. "They are all divas of sadness," says Hindi Zahra.

She made her way to Paris as a young singer in a conscious attempt to free herself from the ties of her homeland and discover other cultures. It was difficult she remembers: 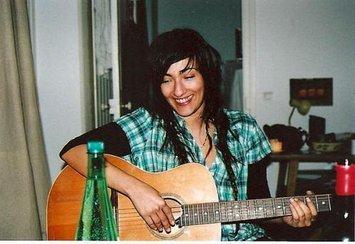 A Maghreb girl with a guitar – for many people it is an image that brings Souad Massi to mind. She it was, who a decade ago, swept away the classic clichés of the female singers of the Arab world. The next generation of these emancipated, cosmopolitan North African songwriters has arrived however. "Hindi Zahra is the new face of a young generation," writes Franzen

​​"All exiles find it hard to settle in a new country; especially young people. One can adjust better to change mentally as an adult. As a youngster, however, the whole thing is just too much, the change overwhelming. Settling to life in a big city was very difficult for me, I had always been used to being on the road."

Growing up as a Berber in a country with a strong Arab culture, and where Arabic rather than Berber was spoken, she always had the vague feeling of living a kind of 'somewhere' existence. It is a feeling, though, that has also always helped her to adapt to new places – eventually even to Paris.

She began life on the Seine as a soul backing singer. "I became really frustrated working only with Western musicians, though," she recalls, "but at the same time I became aware of the wealth of material I had in me. I wanted to take the musical culture of my homeland onto another level, to introduce different instruments, especially the piano and the electric guitar, to create a harmonious blend from the most diverse instruments."

The end result of the young woman's journey of self-discovery can be heard on Handmade (Blue Note/EMI). A mainly acoustic song cycle of Berber blues, trance-like chansons and echoes of the jazz sounds of the 1930s and 40s delivered in both Berber and English.

Sailors on a journey into the unknown

​​The British magazine "Wire" described "Beautiful Tango," one of the outstanding songs on the album as a cross between Django Reinhardt and Billie Holiday. "I'd go along with that," Hindi Zahra laughs. "The rhythm is clearly based on Berber handclapping. The blues music of the Berber, though, has affinities with the music of the Manouche gypsies, little wonder, given that both are nomadic peoples. And the old jazz is also something that fascinated and influenced me from an early stage. For me jazz musicians are sailors on a journey into the unknown. I also go on this journey, with my voice as medium."

The eleven songs are characterised by spontaneity and informality and range in character from informal, intimate miniatures to hymns to the night. The newcomer also has a weakness for the psychedelic: "Set Me Free," for example, is meant to capture the atmosphere of a night in the desert as one stares up in silence at the stars and drifts into contemplation of nature and musings on the meaning of life.

The electric guitar, says Hindi Zahra, can take you to the stars. Other songs have more specific themes. "Oursoul," for example, (a Berber word that sounds English) sensitively explores the theme of forced marriage.

Handmade was recorded in a large artists studio to lend an authentic hand-crafted character to the sound. Musicians do work with their hands after all, so it is a handcraft, says Hindi Zahra, the feline qualities of her voice ranging between notes into richly layered choral effects in songs such as "Old Friends" and "Don't Forget".

"I dream the arrangements and vocals," she states, quite seriously. "The melodies tend to come of their own volition without any great effort on my part. I work instinctively, without putting anything down in writing." In her studio work, too, Hindi Zahra is constantly on the move. Be it Morocco, Paris, Brussels or London, she remains a true nomad.

Souad Massi
Melancholy and Hope
In her hometown of Algiers Souad Massi studied classical Arab-Andalusian music as well as engineering. When she became a local star as the singer of a rock band she learned that Algeria's society was not entirely ready for this. By Ralf Dombrowski

END_OF_DOCUMENT_TOKEN_TO_BE_REPLACED
Social media
and networks
Subscribe to our
newsletter