A New Beginning or a Return to Confrontation?

The recent elections in Bangladesh have seen the third largest Muslim majority country in the world return to democracy. The secularly orientated Awami League won a landslide victory and both popular parties have signalled their readiness to compromise. The political situation remains delicate however. Jasmin Lorch reports from Dhaka

The recent elections in Bangladesh have seen the third largest Muslim majority country in the world return to democracy. The secularly orientated Awami League won a landslide victory and both popular parties have signalled their readiness to compromise. The political situation remains delicate however. Jasmin Lorch reports from Dhaka 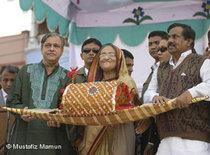 International observers consider the results of the election, in which the Grand Alliance led by the Awami League of Sheikh Hasina won 262 of the 300 seats, to be plausible

​​ For the first time in seven years, on 29 December 2008, the people of Bangladesh, one of the world's poorest countries, were able to choose their own elected political representatives. For most of the two years prior to this, an interim government, supported by the military, was in power and operating under emergency regulations.

With a voter turnout of well over 80 per cent, people voiced their clear approval for a return to democracy. According to indications from international observers the elections were free and fair.

The secularly orientated Awami League (AL) won 230 of the 299 seats. The rather right-wing conservative Bangladesh Nationalist Party (BNP), which governed between 2001 and 2006 in alliance with the Islamist Jamaat-e-Islami (JI), managed only 29 seats. The JI vote decreased from 17 seats in 2001 to just two this time.

In her election campaign, AL leader Sheikh Hasina promised sweeping changes; she would lower the prices of basic foodstuffs and to take a hard line against Islamic militancy. The BNP fought a highly emotional, ideologically charged campaign. Party leader Khaleda Zia repeatedly appealing for votes for her "Nationalist-Islamist" coalition, to save the people and Islam.

In view of the fact that over half of the 160 million people in Bangladesh have to get by on less than a dollar a day, one of the most important challenges faced by the government will be to tackle poverty

​​ The result shows, as has been the case in previous elections, that the vast majority of the people do not want an Islamist state. The percentage share of the vote for the Islamist parties remained virtually unchanged from 2001, however.

Although the JI managed to win only two constituencies, their share of the overall vote, 4.6 per cent remained constant. The small Islamist Islami Andalon party gained around one per cent of the vote. In 2001 the Islamist Islami Oikya Jote (IOJ) party had taken a 0.7 per cent share of the vote. The AL, too, was at pains not to frighten off the religious voters during the campaign.

In the early part of her campaign, Sheikh Hasina prayed in Muslim shrines. The AL also announced that their government would not pass any "anti Islamic" laws. The AL's most important coalition partner is the Jatiya Party (JP), led by former military ruler General Ershad, who made Islam the state religion during his time in office.

Between cooperation and renewed confrontation

Bangladesh is a politically divided country. There is no love lost between the leaders of the two major parties both of whom claim to represent the inheritance of the young nation. Sheihk Hasina (AL) is the daughter of Mujib the country's founder. Khaleda Zia (BNP) is the widow of former the president, General Zia. 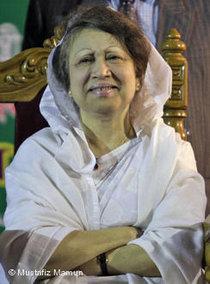 Khaleda Zia, chairwoman of the BNP party, repeatedly called on the electorate to save the people and Islam by voting for her "nationalist Islamist" coalition

​​ From 1991 to 2006, the office of prime minister has alternated between the "Two Ladies" as they are known in Bangladesh. The conflict between the AL and the BNP has brought the country to a standstill on numerous occasions. For many years, mass demonstrations, general strikes and parliamentary boycotts were common. The violent clashes between the AL and the BNP were the principal reason for the military intervention in 2007.

Following the AL's landslide victory, Khaleda Zia initially condemned the result as unacceptable, claiming that the election had been rigged in favour of the AL by the interim government. Soon, however, the AL was making conciliatory gestures to the BNP. Sheikh Hasina, for example, declaring that she viewed the opposition as a part of the government. During the campaign, the AL had already proposed giving the post of deputy speaker of the parliament to the opposition.

The BNP, meanwhile, has announced its intention of taking part in the first sitting of parliament. This all raises hopes that perhaps the parties will be able to cooperate more constructively in the future. Rivalries, however, lie just below the surface in a country that is still very much divided.

Bangladesh has a majority voting system. The number of parliamentary seats does not reflect the percentages of votes cast for the parties. Together, the BNP and the JI did gain more than 37 per cent of the vote between them. Any attempt by the AL to politically marginalize the opposition would undoubtedly result in the BNP's supporters taking their protest onto the streets. There were already violent clashes between the followers of the two parties in the wake of the elections; most of them attacks by AL on BNP supporters. The risk of old hostilities reawaken is ever-present.

Modest successes in struggle against corruption

After taking office, the military backed interim government announced its intention of bringing an end to Bangladesh's endemic corruption. But two years on, achievements in this respect still leave much to be desired. 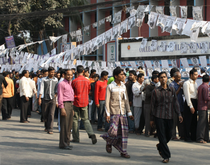 The elections in Bangladesh were fair and legitimate; over 70 per cent of the electorate cast their vote, which would seem to indicate a return to democracy

​​ In its first year in office the interim government had the two dynastic party leaders, Khaleda Zia (BNP) und Sheikh Hasina (AL), arrested on corruption charges. In the end, they were forced to return the two ladies to the political stage after both parties threatened to withdraw from the election process. The interim government has succeeded in convicting several politicians known to be corrupt, so excluding them from the elections. Cases of corruption in the military, however, have gone largely unpunished.

New faces in the Cabinet

Sheikh Hasina has largely managed to do avoid the appointment of corrupt politicians to her new Cabinet. Most of the 31 ministers are new faces. Giving a clean image to the new government was not, however, the only motivation behind the new appointments. Sheikh Hasina was also keen to avoid appointing any of the so-called reformers who turned their backs on her when she was in prison.

Corruption is largely endemic to the political system in Bangladesh, something that was made all too obvious by the last period of AL government from 1996 to 2001. The current composition of the Cabinet also involves risks, however. High expectations have been placed on the new government and, if they are to be met, experience and expertise will be needed.

Paving the way to a new beginning

The AL has declared its intention of bringing to justice any Islamist war criminals who collaborated with the Pakistani army during the war of independence. It's a promise that has been very much welcomed by most people. Leaders of the JI are also among those considered war criminals.

Traditionally the AL has maintained a better relationship with neighbouring India than the BNP. Delhi has repeatedly accused Bangladesh of sheltering insurgents and militant Islamist groups that operate on Indian territory. Sheikh Hasina has now pledged that militant groups will in future find no safe refuge in Bangladesh. She has also proposed the setting up of a regional task force to combat terrorism in south Asia.

The greatest hopes for the people of Bangladesh, however, will be placed in the apparent readiness of the parties to restrict future confrontations between themselves to the parliamentary arena. A return to conflict on the streets is something the military would not be prepared to tolerate.

Jasmin Lorch is a PhD student at the Albert Ludwigs University in Freiburg, Germany. Her doctorate is on the consequences of weak statehood for civil society in Bangladesh and the Philippines.

The Bangladesh Vote
Rival Leaders Draw Closer
Following her landslide victory in the recent elections, the Awami League's Sheikh Hasina offered an olive branch to her arch-rival Khaleda Zia from the Bangladesh Nationalist Party in a bid to create a positive political environment in the troubled country. Anne Thomas and Disha Uppal report

The Asian Muslim Action Network
Recovering the Social Message of Islam
According to Muhammad Abdus Sabur, Islam properly understood stands for equality and fraternity, not just within the mosque, but beyond the Muslim congregation as well. Yogi Sikand met up with the general-secretary of the Asian Muslim Action Network in Thailand and talked with him about the organisation's progressive vision of Islam

Asia
Women in Inherited Positions of Power
From Indira Ghandi to the Indonesian head of state Megawati, in Asia many women play leading roles in politics. Does this mean that women have more political power in Asia than in other countries? Sybille Golte doubts this is the case.