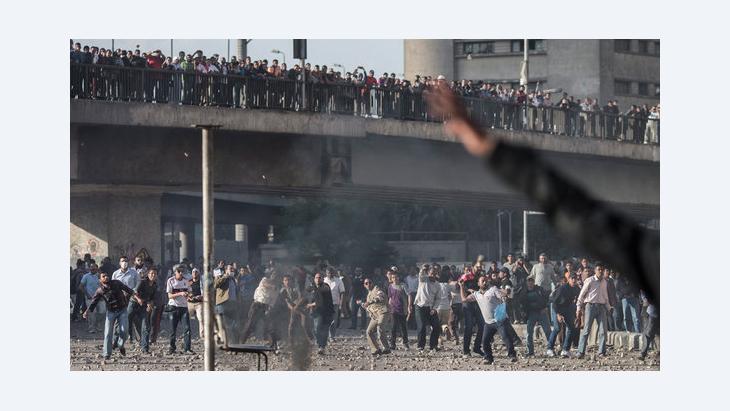 Veering off the Path of Progress

When Hosni Mubarak was ousted from power, many thought Egypt would enter a new era. But the country is more divided than ever, and democracy is still a distant dream. Markus Symank asks what went wrong

The news coming out of Cairo these days is not good: political battles, religious riots and economic downturn prevail. The process of transition to democracy appears to have ground to a halt. Images of violence and chaos dominate reports from the city on the Nile and could not be further from those of the excitement and euphoria that filled the nation in the immediate aftermath of Hosni Mubarak's departure.

Back then, many Egyptians thought they were standing on the threshold of a new era – one with greater freedom, more rights and enough bread for everyone. But that is not what happened. The people are disappointed, and many are now cursing the revolution and asking "what went wrong?"

The polarising force of religion

The military and the Muslim Brotherhood are often cited as contributing to the mistakes and failures of the transition process. Political analyst Emad Gad from the Al-Ahram centre in Cairo believes they got it wrong from the very beginning. Instead of convening a constitutional assembly, as Tunisia did, the army and the Islamists pushed for early parliamentary elections.

Egyptians followed their lead and voted in favour of the ballot in the March 2011 referendum. Egypt then began its dance with democracy, without having first learned the steps. Worse still, says Gad, is that the hurried poll divided society into Islamists and secularists; political discourse has been characterised by polarisation ever since. 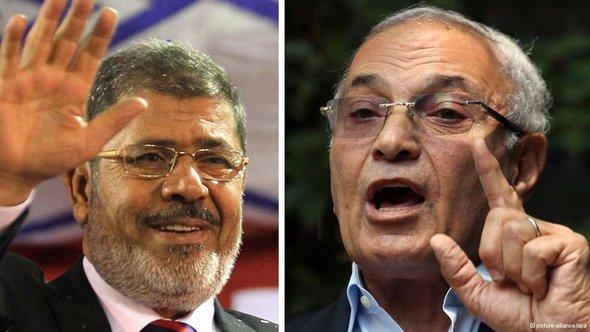 The power behind the throne or stumbling block on the road to transition? Ahmed Shafiq (right), an ally of former President, Hosni Mubarak, lost out in the presidential election to the Muslim Brotherhood's candidate, Mohammed Morsi (left). Nevertheless, many feel that followers of Mubarak's old regime still exert influence and are obstructing the path to progress

​​The Muslim Brotherhood's political wing, the Freedom and Justice Party, which garnered almost 50 per cent of votes in the parliamentary election at the end of 2011, and whose presidential candidate, Mohammed Morsi, was elected Egypt's first civilian head of state six months later, put religion on the agenda from the outset. "In Egypt, religion is the easiest way to get votes," says Gad. "Forty per cent of the population is illiterate, which means many are easy to influence."

Stephan Roll, Egypt expert at the German Institute for International and Security Affairs (SWP) in Berlin, is critical of both the Muslim Brotherhood's polarisation policies and the opposition. "The secular powers want to share power on an equal footing, but in so doing, they render the election results obsolete." For their part, he says, the Islamists see their victory at the ballot box as a carte blanche to rule with absolute power. "Both sides clearly fail to understand the true meaning of democracy," he says.

Since the Islamists' landslide victory in the parliamentary election, the political debate in Egypt has focused almost entirely on the role of religion in the constitution, the media and society.

The revolutionaries' calls for social justice have been drowned out, and politicians are simply ignoring Egypt's burning economic issues. Roll feels that this is one of the biggest problems to arise in the transition process: the political parties have not yet learned how to ﻿leave fundamental debates aside and govern pragmatically. Until they do, he says, the country cannot move forward.

While the Egyptian opposition seeks to blame the Islamists for the economic stagnation and political stalemate, the Islamists themselves say the current problems are a hangover from the former regime and that followers of Mubarak's old system (which are known as the "Felul") are obstructing the path to progress.

The true strength of the old regime is bitterly contested. Emad Gad says that Mubarak's legacy lives on in the form of corruption, torture and nepotism, but says he sees no evidence that the Felul is putting up a coordinated resistance. He says that holding the Felul responsible for the current ills of Egyptian society is more likely "an excuse by the Muslim Brotherhood, which is reluctant to reform." 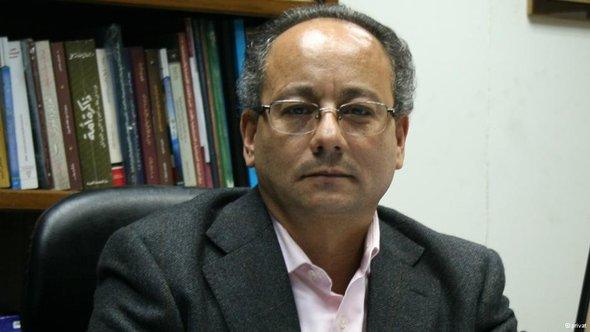 Political analyst Emad Gad from the Al-Ahram centre in Cairo feels that Egypt should have followed the example set by Tunisia, the birthplace of the Arab Spring, and convened a constitutional assembly before holding a general election

﻿Stephan Roll, on the other hand, believes that people underestimate the extent to which the old system influences the new one. Mubarak's regime was not only made up of just two or three families, it was deeply rooted in the interest groups of the economic elite, the judiciary and the security apparatus. The fact that Mubarak's former prime minister, Ahmed Shafiq, won 48 per cent of votes in last year's presidential election could be seen as evidence of this theory. So too could the dissolution of the parliament, which is dominated by the Islamists, as ordered by Egypt's top judges.

The search for a reconciler

The lack of trust on all sides has almost brought the transition process in Egypt to a standstill, and many believe there will be no real progress until either an individual or a national institution steps in as a mediator to bring the two sides – which Roll refers to as the "squabbling children" – to the negotiating table. Al-Azhar, the home of Islamic scholarship, would have been the ideal choice for this role had it not allowed itself to be exploited by the opponents of the Muslim Brotherhood at an early stage.

As there is no Egyptian Nelson Mandela in sight, many are looking to the military to bridge the gap. But Emad Gad doesn't see them as the right people for the job. "The months under military leadership directly after Mubarak's collapse were a catastrophe," he recalls. "The generals were obviously only interested in securing their privileges in the new era."

Recently, a group of activists said they had collected a million signatures calling for the military to take over again. If the army really were to make a political comeback, Egypt's transition to democracy would be dead in the water.

Political analyst Taqadum al-Khatib argues that Egypt can, in co-ordination with its European partners, develop a common vision to solve the complex conflict in Libya. For this to ... END_OF_DOCUMENT_TOKEN_TO_BE_REPLACED

The upheavals of the past year in the MENA region are arguably as momentous as those of the Arab Spring in 2011. Yet perhaps the biggest difference is that our interest seems to ... END_OF_DOCUMENT_TOKEN_TO_BE_REPLACED

In 2019, the long-running Penguin Classics series released its first novel translated from Arabic: Tawfiq al-Hakim’s "Return of the Spirit", conveyed into English by William ... END_OF_DOCUMENT_TOKEN_TO_BE_REPLACED

Equality in divorce, a ban on polygamy: reformers of Islamic family law have a clear agenda. They are exploiting the ambiguity of traditional jurisprudence. By Joseph Croitoru END_OF_DOCUMENT_TOKEN_TO_BE_REPLACED