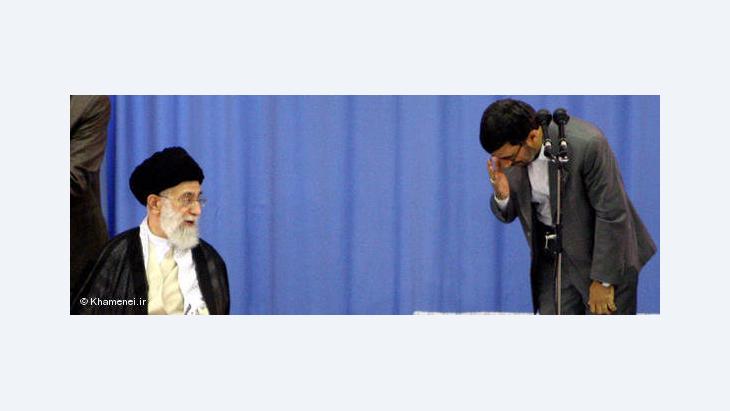 ﻿The conflict between Iran's spiritual leader Ali Khamenei and President Mahmoud Ahmadinejad is all about control of oil revenues. By Rudolph Chimelli

No one in Tehran speaks about it openly, yet the power struggle between President Mahmoud Ahmadinejad and the conservatives surrounding the country's spiritual leader, Ali Khamenei, is not only about ideological principles, but also about money. More precisely, it is about the right to control the countries oil revenues. By dismissing oil minister Masoud Mirkazemi and taking control of the ministry himself, the president has made his intentions clear.

He aims to once again turn the National Iranian Oil Company and its ministry into the driving force behind Iran's economic development. The Guardian Council, the body in charge of interpreting the constitution, declared that the president has acted illegally in appointing himself head of the ministry, but the head of state has ignored the ruling.

On Sunday, 29 May, Khamenei indirectly provided the president with some support. In the presence of the newly elected speaker of parliament, he said, "There are weaknesses and problems, but the composition of the executive is good and appropriate, and the government is working." At the same time, he made it clear that he will allow Ahmadinejad to remain in office until the completion of his mandate in two years time. 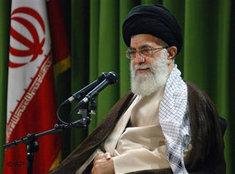 ​​In his attempt to stifle the conflict, Khamenei has reminded the government to implement without hesitation laws enacted by parliament – something that Ahmadinejad has not always done. The spiritual leader also enjoined the parliament to make laws that are feasible for the government to act upon.

Khamenei gave a clearer warning to the president with respect to the parliamentary elections next March. "No one has the right to interfere in the elections," he said, after his supporters had just revealed that Ahmadinejad promoted his re-election in 2009 by distributing cash from state coffers to some nine million voters. The goal of the president's party is to win at least 130 of the 290 seats in the elections to the Majlis, the Iranian Parliament. Ahmadinejad's political machine and his friend Esfandiar Rahim Mashaei are already hard at work within provincial administrations to try and realize this goal.

Ahmadinejad's hope of having Mashaei succeed him in the office of president seem improbable in light of the powerful front opposed to this scenario. Evidently, the power struggle is currently in state of deadlock. Ahmadinejad, who last month flirted with the notion of resigning, is allowed to continue in office, although he refuses to part company from Mashaei or renounce his idea of an "Iranian Islam". Following this, Khamenei is supposed to have refrained from making "painful decisions" with respect to the government. 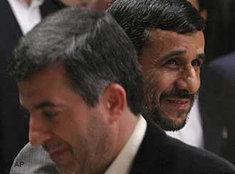 A thorn in the eye of the conservatives: Ahmadinejad's closest advisor and Chief of Staff – Esfandiar Rahim Mashaei

​​In the dispute about oil revenues, not only conservative clerics, but also leading figures in the Revolutionary Guard stand opposed to Ahmadinejad. He emerged out of their ranks and he helped many of them to assume high-ranking positions within the political apparatus. The Pasdaran, in turn, have used their newfound position of power to build up a business empire. As a result, the some four dozen companies that make up the core of the Iranian oil industry belong not to the top clerics, but rather to Revolutionary Guard commanders.

Today, the National Iranian Oil Company, which under the Shah and even in the early years of the Islamic Republic formed the most solid pillar of the state, together with the oil ministry are, in the words of one critic, nothing more than "an empty shell".

All those currently enjoying privileges would suffer if Ahmadinejad succeeds in implementing his plans, even if these can only be enacted gradually.

Not least of all, the huge religious foundations would feel the effects of any changes. A large part of all oil revenues flows past parliament and the government directly into the coffers of the foundations, which are solely controlled by Khamenei – who is accountable to no one for his decisions.

The foundations, for their part, support the regime by providing social assistance and all sorts of employment to the common people, who can then be relied on for demonstrations and elections. Those benefitting from the foundations' largesse are estimated to make up around a quarter of the Iranian population.

​​Conservative opinion makers have labelled Mashaei and his followers – and indirectly those of Ahmadinejad – as "deviationists". For the time being, the struggle between the parties is still being fought on old issues. The "deviationists" obtained control over the cultural budget, which makes up around 30 million euros and is intended to cover the costs of restoring antique monuments, holding festivals, the staging of theatrical performance, and the production of films. Almost half of these funds were returned to the clerics according to the wishes of the spiritual leader to "promote religious activities".

Conversely, the deviationists managed to stop a tourism and property development project on the Persian Gulf island of Kish, which involved Khamenei's son Modshtaba and was estimated to cost 60 million euros.

Now, the state is assuming control of the project, supposedly with the participation of American companies. Also unclear is whether a 20 billion euro project to build a railway link from the Persian Gulf to Central Asia will fall into the hands of trusted confidantes of the spiritual leader, as planned. The "deviationists" are also trying to gain control over Iran Chodro, the country's largest auto manufacturer, with the founding of a joint state and private company.

Some leading figures have already lost out as a result of the struggle. An ayatollah, who controlled the import of sugar, ended up losing half of his sales to a state-run company. One of his spiritual colleagues suffered a drastic collapse of his wheat business when the government raised the purchase price for domestic grain.

Iranian author Fariba Vafi is adept at describing everyday scenes and concealing within them something ambiguous, in parts strange and grotesque. She writes novels – which have ... END_OF_DOCUMENT_TOKEN_TO_BE_REPLACED

In her latest exhibition in Japan, Farzaneh Khademian depicts figures who seem detached from their surroundings. In interview with Qantara.de, the Iranian photographer and painter ... END_OF_DOCUMENT_TOKEN_TO_BE_REPLACED

The catastrophic human rights situation in Bahrain is being largely ignored by the rest of the world. Despite all the damning evidence, which includes a Human Rights Watch report ... END_OF_DOCUMENT_TOKEN_TO_BE_REPLACED

Talks to salvage the 2015 Iranian nuclear deal have entered their eighth round in Vienna. Even if a deal is struck and some of the sanctions are lifted, the state of the Iranian ... END_OF_DOCUMENT_TOKEN_TO_BE_REPLACED

Every year in December, the team at Qantara.de takes a look back at the articles that proved most popular with our readers. This year is no different. Here is a run-down of the ... END_OF_DOCUMENT_TOKEN_TO_BE_REPLACED

END_OF_DOCUMENT_TOKEN_TO_BE_REPLACED
Social media
and networks
Subscribe to our
newsletter