Pramoedya Ananta Toer, once considered Asia's most promising candidate for a Nobel Prize in literature, has recently died, aged 81, still unknown to many in his homeland. The great writer is now in danger of falling into oblivion, writes Lachlyn Soper 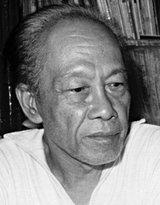 Pramoedya Ananta Toer died on April 30. In his writings, he lobbied for bringing in Islamic movements into leftist and local anti-colonial streams

​​When I met Indonesia's most acclaimed author and political dissident, he was shoveling out dead leaves from his pool. One could be forgiven for mistaking him as the gardener.

Many Indonesians would fail to recognize him as well. Though he reached international acclaim, Pramoedya Ananta Toer lived in a country where the cost of books was prohibitive to many.

His works banned in his home country, Toer instead gained his notoriety abroad, his works translated into 36 languages, and integrated into school curricula in neighboring Malaysia.

His unassuming nature contrasted with an unrelenting drive. A self-declared autodidact, he dedicated most of his life to writing for Indonesians, widening and strengthening the ideas of pluralism and nationalist consciousness, bringing in Islamic movements into leftist and local anti-colonial streams. However, some Indonesian writers and officials resented Toer for his tacit support of purges of non-communist literature in the 1960s.

These supposed leftist-leanings fell out of step with the official version of the state, and he was imprisoned three times under three different regimes. The longest of which was under Suharto, who branded him a communist and detained him for 14 years, most of which under hard labor on the prison colony of Buru Island.

With other political prisoners on Buru, Toer worked in harsh conditions to create a farm out of dry savannah. He received a typewriter upon the visit of a high-level official, and his fellow prisoners carried out his duties so he could write.

"I am everything because of them," Toer wrote about his fellow prisoners. In his memoirs Nyanyi Sunyi Soerang Bisu (The Mute's Soliloquy) he tells how at night, he would recount to them orally his tale of Indonesian nationalism.

The result of this leniency and sacrifice was Toer's most highly acclaimed achievement: a series of four novels called, "The Buru Quartet," loosely based on the life of Indonesian nationalist figure, Tirto Adi Surjo. More than a bildungsroman, Toer wove a mellifluous tale mixing myth and history.

Islam as a modernizing force

Composed mainly while on his island prison, the Buru Quartet shows a history where Islam was not a solution, but a modernizing force in Indonesian history, contributing to a national consciousness across the diverse archipelago.

As anti-pornography legislation winds its way through the Indonesian parliament, one cannot help but wonder how the nation's politics might differ if Toer's works had achieved more popular acclaim.

Though the Wahabis of Saudi Arabia, and the Mahdis of the Sudan inspired conservative regimes in the Middle East, Islamic movements inspired by these schools of thought in Indonesia at the turn of the century promoted progressive reforms.

In Buru, the main character Minke meets members of the Jakarta-based groups Boedi Oetomo and Sarekat Islam, which used Islam as a modernizing force in developing progressive schools and political organizations, with Marxist affiliations.

Reevaluation of the establishment

Through the eyes of Minke, Toer lays out a map of Indonesian nationalist currents embracing pan-Islamic, pan-Asian, Marxist, anti-colonial, and Chinese nationalist movements. Toer also intended that this work serve as a blueprint for modern Indonesia.

"The duty of a writer is to make an evaluation and reevaluation of the establishment in every walk of life," Toer wrote in his essay, "Literature, Censorship, and the State."

"A child of all nations"

In the third novel of the tetrology, Child of All Nations, Minke realizes that all of these ideas are superseded by a shared humanity and a refusal of the intellectual superiority of his western colonial mentors. In a key passage, Minke declares:

"It was not only from Europe that so much could be learned! [...] I realized that I am a child of all nations, of all ages, past and present. Place and time of birth, parents, all are coincidence: such things are not sacred."

He was released from Buru Island in 1979, but remained under house arrest until 1992. Accolades such as the PEN Freedom to Write Award and Magsaysay prize fell at his feet, but he chose not to leave the country to receive them for fear of being denied reentry.

Government censors lifted the bans on his books after the fall of the Suharto regime in the 1998. Toer began to travel abroad, but largely kept a quiet existence in a villa outside Jakarta, paid for by international royalties. An interview with him was featured in the inaugural issue of Indonesian Playboy.

"It is unfortunate that the Indonesian government did not give him the farewell that he deserved." said Indonesian pastor, Viktor Hamel. "He is a huge literary figure who will now be forgotten."

Anti-Pornography Bill in Indonesia
March for Diversity
Human Rights Groups join the protest of Indonesian women against a new tough anti-pornography bill – the opposition to what many in Indonesia call the "Talibanization" of society is strong. Edith Koesoemawiria reports

60 Years of Independence
Indonesia's Hard Road to
The signing of the Aceh peace settlement practically coincides with the 60th anniversary of Indonesia's independence from Dutch colonial rule. Sybille Golte on the country's stony path to democracy

END_OF_DOCUMENT_TOKEN_TO_BE_REPLACED
Social media
and networks
Subscribe to our
newsletter