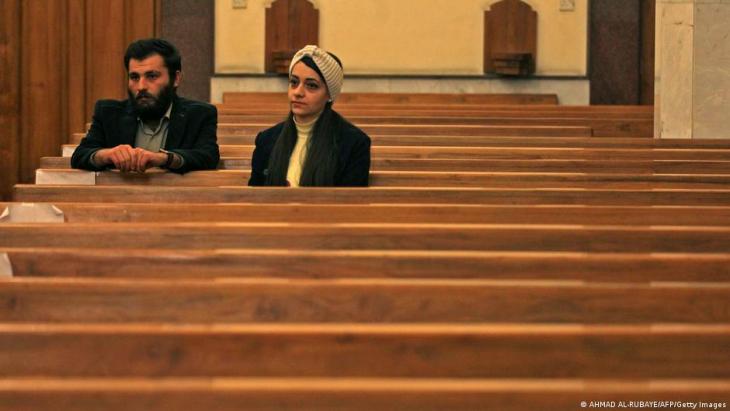 Some fled after the U.S.-led invasion, others during sectarian bloodshed and more following jihadist attacks. Iraq's last two violent decades have hollowed out its Christian community which dates back two millennia.

After first settling in the fertile plains of Nineveh province before heading for the busy boulevards of Baghdad, more than one million Christians have in more modern times been uprooted by Iraq's consecutive conflicts.

"By the age of 24, I had already lived through and survived three wars," said Sally Fawzi, an Iraqi Chaldean Catholic, who left her country more than a decade ago and is now living in the U.S. state of Texas.

Some members of Iraq's historic Christian community escaped to the nearby autonomous Kurdish region, others waited in neighbouring Jordan to emigrate and then resettled in countries as far away as Australia. Many lost hope in their homeland long ago, but see next month's scheduled visit by Pope Francis – the first-ever papal trip to Iraq – as an important opportunity for him to use his voice to garner international support for Iraqis of their faith.

Iraq's Christian community is one of the oldest and most diverse in the world, featuring Chaldean, Armenian Orthodox, Protestant as well as other branches of Christianity. By 2003, when then-dictator Saddam Hussein was toppled, there were 1.5 million Christians in a country of 25 million people, or around six percent of the population. But as Iraq's population mushroomed, the percentage of the minorities shrank. Today, only 400,000 Christians remain in a predominantly Muslim country of 40 million people, said William Warda, co-founder of the Hammurabi Human Rights Organisation.

Among those who left, nearly half a million resettled in the United States. Others ended up dispersed in Canada, Australia, Norway and other parts of Europe.

Rana Said, 40, had tried her hardest to stay. Her aunt and uncle were killed in 2007, when U.S. soldiers blindly opened fire on the streets of Mosul after an attack in the regional capital of the northern province of Nineveh. Still, she remained in the city with her husband Ammar al-Kass, 41, a veterinarian. The following year, with Iraq gripped by sectarian bloodletting, a string of assassinations, including of Christians, pushed the Kass family to move to the relative safety of Iraqi Kurdistan. But by 2013, the region was growing increasingly unstable.

The couple finally left their ancestral Iraq and were resettled on the Gold Coast of Australia where they found jobs in their respective professions and have raised three daughters: Sara, 10, Liza, six, and three-year-old Rose. The young girls have never visited Iraq, although they speak Arabic and a modern dialect of Assyrian – the ancient language of Christ – at home. A year after they resettled, jihadists from the so-called Islamic State group swept through their city. The family watched in horror from halfway around the world.

"The fall of Mosul wasn't easy for us," Ammar recounted, particularly IS's destruction of the city's Church of the Virgin Mary, a 1,200-year-old piece of treasured heritage. "That's where my father was married. It was razed and obliterated to the ground," he said.

He tried to keep his wife – pregnant with Liza at the time – away from computers and phones, afraid the added stress would harm the baby. "I used to have nightmares about IS entering and killing and raping my family. It was a repetitive, horrible dream," Rana said emotionally, of the jihadists who forced women of the Yazidi religious minority and those of other minorities into sexual slavery.

The clashes in Baghdad between supporters of Muqtada al-Sadr and pro-Iranian militias show that an intra-Shia power struggle is in full swing. An analysis from Cairo by Karim El- ... END_OF_DOCUMENT_TOKEN_TO_BE_REPLACED

Bachtyar Ali sends the hero of his latest novel – "Mein Onkel den der Wind mitnahm" – literally flying. Jamshid is so thin after his years as a political prisoner that a gust of ... END_OF_DOCUMENT_TOKEN_TO_BE_REPLACED

In this essay, renowned Lebanese journalist and writer Hazem Saghieh asks whether the Arab Levant, which stretches from Iraq in the east to Egypt in the west, will remain an ... END_OF_DOCUMENT_TOKEN_TO_BE_REPLACED

Climate change is taking its toll on communities in Iraq. Younes Ajil turns on the tap in his home but nothing comes out. Villages in the south of the drought-hit country are ... END_OF_DOCUMENT_TOKEN_TO_BE_REPLACED

END_OF_DOCUMENT_TOKEN_TO_BE_REPLACED
Social media
and networks
Subscribe to our
newsletter