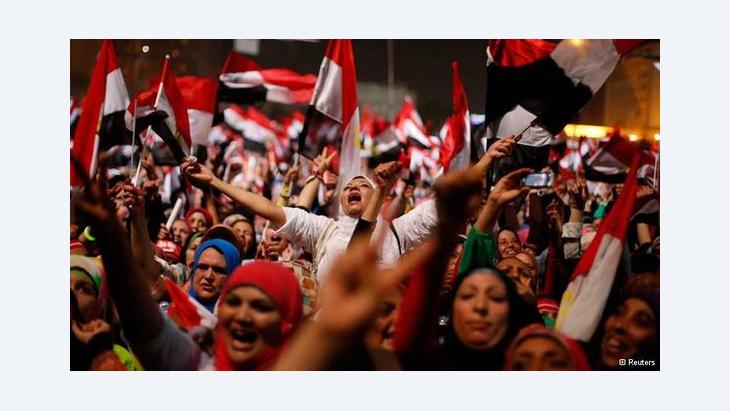 ﻿The celebrations across Egypt following the ousting of President Mohammed Morsi look very much like those in 2011, when Hosni Mubarak had to go. But whether this new revolution is here to stay, is unclear. Matthias Sailer reports from Cairo

﻿All day, people were waiting for the end of the ultimatum the army had set for President Mohammed Morsi. Late in the afternoon, hundreds of thousands of anti-Morsi protesters again flocked to Tahrir Square and the presidential palace.

The mood, up until then, had been far more tense, but also calmer than in the last few days. "Quiet, be quiet," some of the protesters called out as the defence minister's speech, which many listened to on the radio, began.

A few minutes later, the crowds erupted into ear-splitting cries of joy, Tahrir Square turned into a huge party. Fireworks were let off, people hugged each other everywhere, crying tears of joy.

"I'm so happy that Egyptians of all classes are here on the square," Sherif, a university professor, said. "You could say that we have been freed from the radicals. The Muslim Brotherhood has caused many serious problems." 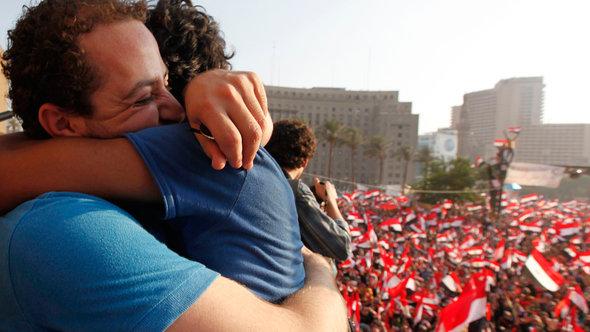 Revolutionary joy: Egypt's armed forces overthrew elected Islamist President Morsi on Wednesday and announced a political transition with the support of a wide range of political, religious and youth leaders. Morsi is currently under house arrest at an undisclosed location

​​Sherif emphasized that they are all Egyptians, not just Muslims or Christians, and that, for at least 7,000 years, they have all been drinking the same water and breathing the same air.

All around Sherif, the crowds were jumping. One man was down on his knees thanking God, the man next to him was fighting back the tears. People waved thousands of flags, blowing their whistles and vuvuzelas.

A military helicopter circled the square, dropping little Egyptian flags into the crowds who chanted "the people and the military are one". A woman with a headscarf ran to the man next to her and shouted "the young people have freed us a second time!"

The woman was referring to the ousting of Hosni Mubarak in February 2011. But there are still many unknowns now in Egypt. The military, the political opposition, representatives of the Tamarod campaign, the Coptic Church and high-ranking Islamic scholars have agreed that the head of the Supreme Constitutional Court will serve as interim president. But there is no clear timetable and it is unclear what will happen with Morsi.

"He needs to go behind bars," Nadir, one of the protesters, told DW. "He has to be charged in a court of law. Many people were killed during his time in office and we won't forget those people."

It's also unclear what will happen with those members of the Muslim Brotherhood still out protesting. For anti-Morsi demonstrators like Nadir, they are finished and should go home. He said the real Egypt was on Tahrir Square. 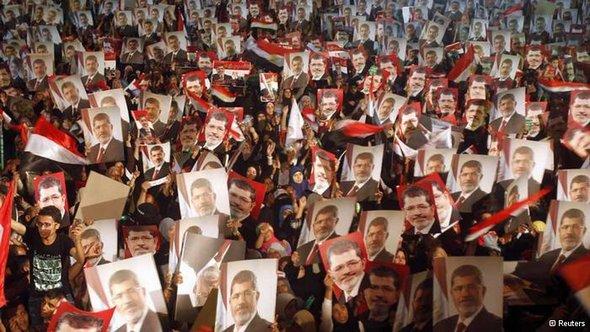 A statement published in Morsi's name on his official Facebook page said the measures announced amounted to "a full military coup" and were "totally rejected". Pictured: Members of the Muslim Brotherhood and supporters of Egypt's President Mohamed Mursi at the Raba El-Adwyia mosque square in Cairo on 3 July 3

​​But the danger of violent clashes between the two groups remains for now. How the military deals with the Islamists in the next few days will decide whether there will be violence or not. The military has already closed several Islamist TV channels and many Islamists are afraid of being arrested or attacked.

Many have therefore left the area of the pro-Morsi protests in Cairo's northeast. One of the most important opposition politicians, Hamdien Sabahi told Al-Arabiya that the Muslim Brotherhood should not be excluded or mistreated.

But state-owned daily Al-Ahram reports that there were already 300 arrest warrants for members of the Muslim Brotherhood. If substantiated, such fighting talk could make reconciliation nigh on impossible.

Many leading figures of the Muslim Brotherhood could not be immediately reached for comment. A spokesman said that Morsi and his advisors were under house arrest in the president's guard's residence.

But most of the protesters do not care about that at the moment – they praise the defence minister's speech as "well thought through", as one demonstrator called Mohamed, on Tahrir Square told DW. "He asked all social groups to gather here and talk through all the issues with the military – that's how it should be," Mohamed says.

At the moment, many anti-Morsi protesters revel in a bit of schadenfreude with regards to the Islamists.

People are celebrating until the small hours, there are convoys with drivers honking their horns and people constantly setting off fireworks. On Tahrir Square, some hope that the Muslim Brotherhood will not be hunted down. "I don't think anything will happen to them," Mostafa says. "They are our brothers, Egyptians just like us. We were the opposition and we didn't harm them. The new regime should not do so either," he adds.﻿

Two refugees detained in Egypt are facing deportation to Eritrea. The expulsion of the Eritreans, who have been incarcerated in Cairo for more than eight years, has been halted ... END_OF_DOCUMENT_TOKEN_TO_BE_REPLACED

"The people aren’t ready for democracy" has been the constitutional basis for Arab tyranny, its favourite slogan and its sacred narrative for more than a century. Yet, asks Khaled ... END_OF_DOCUMENT_TOKEN_TO_BE_REPLACED

International relations are shifting across the Middle East as regional powers adapt to America's retrenchment and China's growing influence. Although the region could become the ... END_OF_DOCUMENT_TOKEN_TO_BE_REPLACED

Germany's foreign policy is explicitly values-based. But what happens, Ralf Bosen asks, when democracy, the rule of law and human rights collide with the logic of trade and ... END_OF_DOCUMENT_TOKEN_TO_BE_REPLACED

Egyptian author Nadia Wassef talks about opening the first independent bookstore in her home country; and her latest book in which she celebrates books and booksellers. By Manasi ... END_OF_DOCUMENT_TOKEN_TO_BE_REPLACED
Author:
Matthias Sailer
Date:
Mail:
Send via mail

END_OF_DOCUMENT_TOKEN_TO_BE_REPLACED
Social media
and networks
Subscribe to our
newsletter