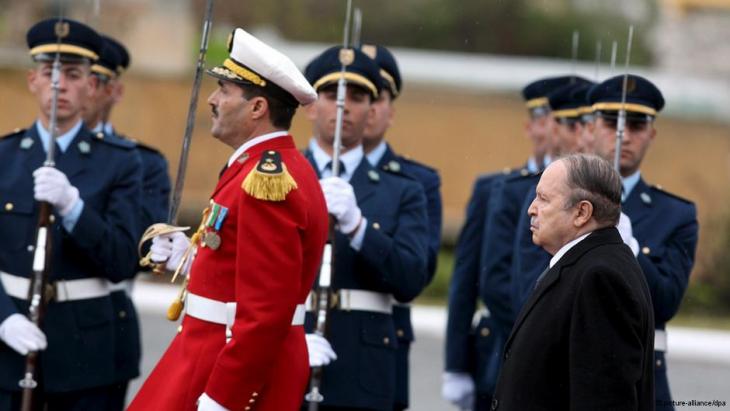 On 17 April, Algeria goes to the polls to elect a new president. However, it seems as if the new president will be the old one: Abdelaziz Bouteflika. But even though the outcome seems like a foregone conclusion, political resistance is forming. By Kersten Knipp

Abdelaziz Bouteflika is once again running for president. The elections are scheduled for 17 April, and observers feel that bar a major crisis, he is likely to win. If he does, the current president, first voted into office in 1998, will start his fourth term at the helm of the Algerian state.

But resistance to this almost inevitable outcome is forming. In Algiers, the group "Barakat!" is protesting against Bouteflika's renewed candidacy. The group's followers have distributed flyers around the university campus. "I never asked you to run for the fourth time," they say. "So I call on you to withdraw from this political masquerade."

The accusation of a political masquerade has been heard repeatedly of late, and not only in the run-up to the elections. Why is Bouteflika, who has ruled the country since 1998 and is now 77 years old, running yet again? Who put him forward as a candidate? What is the agenda? There are no clear answers to these questions in Algeria, only assumptions.

Obfuscation as a principle

Writing in the newspaper "L'Observateur du Maroc", Algeria expert José Garçon says that there is method in the lack of transparency. "Obfuscation and manipulation explain why it is so difficult to penetrate right to the heart of Algeria's power centre. At the same time, these tactics ensure the impunity of a regime that has resolved to remain anonymous so as not to be held accountable." Garçon goes on to say that this is also one way to avoid presenting the face of a tyrant to a populace that is hungry for retaliation, a person against which they can rise up, as happened in neighbouring countries. 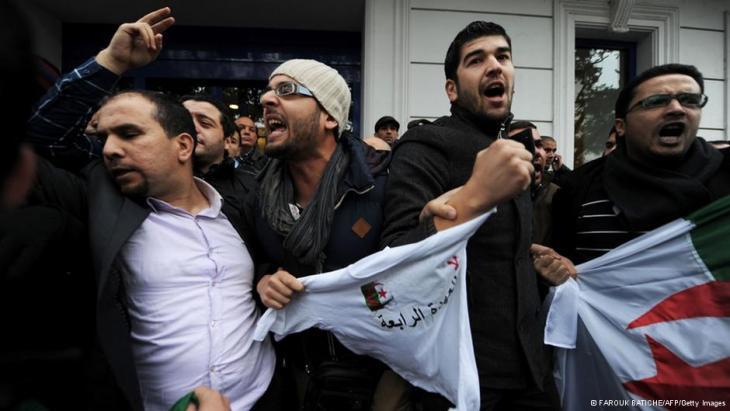 "Enough is enough!" A demonstration organised by the "Barakat!" movement in Algiers to protest against Abdelaziz Bouteflika running for president for a fourth time. Bouteflika is accused of only being able to stay in power because of his reliance on a corrupt and opaque power system. He is also accused of being a puppet of the secret service and the military, an accusation that seems to be given weight by the fact that he has rarely been seen in public since suffering a stroke last year

However, the actions of "Barakat!" in particular show that the government need not fear a broad-based, resolute opposition. The protest group has scarcely any impact beyond the capital. At best, it has managed to pick up a few like-minded agitators in other university cities. In provincial Algeria, however, the movement has barely left a mark at all.

Nevertheless, as sociologist Nasser Djabi of the Applied Economic Research Centre for Development (CREAD) in Algiers commented in an article in the magazine "Jeune Afrique", the alliance does prove that a "moral force" is emerging out of the political struggle. "It is therefore important", writes Djabi, "that the movement is not confined to the middle class but spreads to the lower classes as well."

But that is exactly what is not happening. The Algerian people remain silent – just as they largely held back during the uprisings in the Arab world. After a few demonstrations in the capital, the protest subsided again.

In his recently published book "Histoire secrète de l'Algérie indépendante", the journalist Mohamed Sifaoui suggests several reasons for this reticence. First of all, after the traumatic experience of the civil war that raged from 1992 to 2002, Algerians do not want to risk doing anything that could threaten the stability of their country again. Secondly, the government has considerable wealth at its disposal thanks to oil revenues. As soon as it deems it necessary, it uses these financial resources to take the wind out of the sails of any burgeoning protests. "The regime distributes money without an economic plan and for the sole purpose of buying social peace."

Thirdly, there is no notable opposition in Algeria. "The regime has created a vacuum around itself by bribing some and repelling others." The opposition regularly finds itself running out of steam. All other forces have been rendered docile by cronyism. 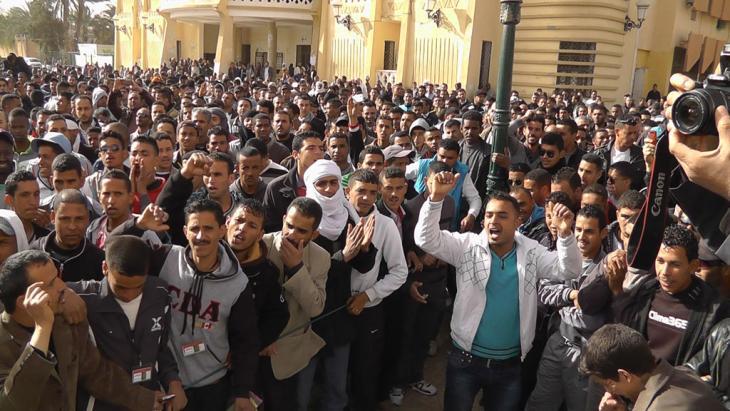 Facing a grim future: unemployed youths protesting in Ouargla, Algeria. Despite the fact that Algeria has huge deposits of oil and gas, the country actually sees little of the wealth. The government tends to buy peace and quiet by making targeted gifts to certain parts of society whenever it deems it necessary, says Mohamed Sifaoui

For this reason, the country's leaders scarcely need to rely on violence any more, explains political scientist Rachid Ouaissa, who teaches at the University of Marburg in Germany. "We no longer see the massive human rights violations of the 1970s." In principle, the country would be ready to discuss political principles such as democratic change and the legitimacy of rulership structures. "But nothing is happening. The major parties have been broken. The political scene has been lulled into submission," says Ouaissa.

Fear of the younger generation

All that the regime is interested in these days, writes Sifaoui, is not loosening its grip on the political and economic reins. This same logic has characterised Algerian politics throughout Bouteflika's time in office. The implications of this stance were evident during the visit of US Secretary of State John Kerry on 4 April 2014 – a good two weeks before the presidential elections.

Kerry's visit irritated other politicians who are running for the highest office in the state. They felt that it put them at a disadvantage and complained that the visit benefited the president only and not them. The newspaper "Quotidien d'Oran" noted that they were thus emulating exactly the behaviour of which they accuse Bouteflika: "Such is the state of politics in a country whose stakeholders do not defend the independence of their country but rather that of the clan or interest group to which they belong."

The regime, writes Sifaoui, has only one thing to fear: a rebellion by young Algerians. However, there is little to indicate that such agitation is in the offing. Large sections of the middle class are benefitting from money allocated by the regime, says Rachid Ouaissa, which is why they continue to support it. The poor, by contrast, simply tolerate the status quo, he says.

However, should the young ever get their hands on some money, says Ouaissa, they would know exactly what to do with it. Given the fact that the only thing separating them from the yearned-for European lifestyle are the waters of the Mediterranean, "they would buy an inflatable dinghy."

"The people aren’t ready for democracy" has been the constitutional basis for Arab tyranny, its favourite slogan and its sacred narrative for more than a century. Yet, asks Khaled ... END_OF_DOCUMENT_TOKEN_TO_BE_REPLACED

As current events continue to remind us, people all over the world are constantly being forced into exile. "Songs of Exile", created by Algerian Berber exile Abderrahmane Abdelli ... END_OF_DOCUMENT_TOKEN_TO_BE_REPLACED

A new survey by Arab Barometer adds numbers to the narrative that COVID has led to a harsher reality for women in the Middle East and North Africa. By Jennifer Holleis and Razan ... END_OF_DOCUMENT_TOKEN_TO_BE_REPLACED

Algerian scholar Said Djabelkhir rejects the charge of "offending Islam". In interview with Ismail Assam, he maintains that he has been wilfully misconstrued. At the same time, he ... END_OF_DOCUMENT_TOKEN_TO_BE_REPLACED

The Libya Conference will be held in Berlin on 23 June. Much has been achieved since the last Libya Conference in Berlin in January 2020. The ceasefire is holding, there is a ... END_OF_DOCUMENT_TOKEN_TO_BE_REPLACED
Author:
Kersten Knipp
Date:
Mail:
Send via mail

END_OF_DOCUMENT_TOKEN_TO_BE_REPLACED
Social media
and networks
Subscribe to our
newsletter