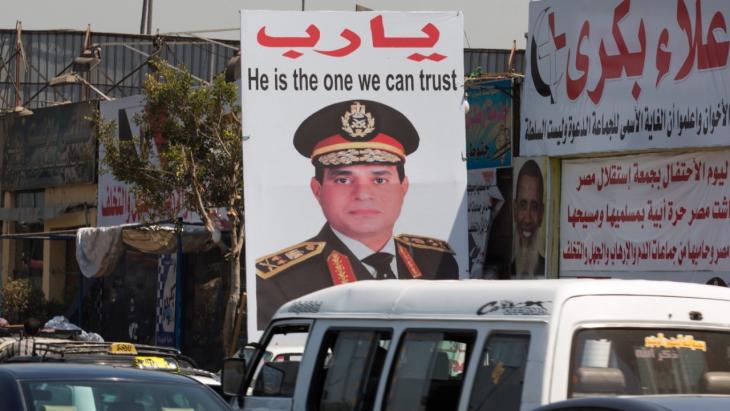 A nation marching in step

Anyone seen filming in Cairo these days should expect to be approached by an upright citizen demanding to see a permit and referring to the omnipresent threat of terrorism. On the eve of the presidential election in Egypt, fighting terrorism and not boosting the country's crippled economy seems to be right at the top of the political agenda. A commentary by Stefan Buchen in Cairo

With the exception of the Egyptian pound, nothing in this nation is suffering more from the effects of inflation than the term "terrorism". It is a synonym for the Muslim Brotherhood, the movement that after some initial hesitation positioned itself at the helm of the 2011 revolution and went on to win the first free parliamentary poll, capturing more than 50 per cent of the vote. The Muslim Brotherhood then put up Egypt's first democratically-elected post-revolutionary president.

Now its members are terrorists – an astonishing development. The press and radio and television stations are all in agreement on this point. Every day there are reports of security forces flushing out yet another horde of terrorists that have gathered for a demonstration in some district of Cairo or somewhere out in the provinces between Alexandria and Aswan.

"Egypt is threatened with destruction, but it will not be destroyed," says Abdul Fattah al-Sisi, formerly a field marshal and head of the military intelligence service, now a coup leader and presidential candidate. The media are already referring to him as the "future president". At this juncture at the very latest, the penny drops: the opposing candidate Hamdeen Sabahi has nothing more than a walk-on part in this mock democratic play. The dice fell long ago.

Hamdeen Sabahi (pictured here) is Abdul Fattah al-Sisi's only challenger in Egypt's up-coming presidential election. However, it seems that no one in Egypt seriously believes he has a chance. Stefan Buchen describes him as having "nothing more than a walk-on part in this mock democratic play"

Sisi is casting himself as Egypt's saviour. "Terrorism is our biggest fear," says the presenter on a private broadcasting channel by way of introduction to her question: "How do you plan to get a grip on terrorism?" At this point, Sisi visibly perks up. He had previously rather awkwardly hinted that he has up his sleeve a programme for economic growth and development aimed at rejuvenating outlying areas such as the Sinai, Wadi al-Gadid and the western desert. But this isn't really his field; Sisi's chief focus is the complete eradication of terrorism.

He calls on citizens to support the police. They should, he says, appreciate that "transgressions" ("tadjawuzat") may occur in the course of police raids and interrogations. Moreover, the media and public opinion should get behind the security forces. Sisi would certainly prefer to see fewer reports like the one recently published by French journalist Claire Talon, who gathered shocking witness statements from young detainees who were sexually abused in police custody in recent months.

Finger on the trigger

During the television interview, Sisi employs a gesture to illustrate the danger faced by Egypt in the summer of 2013. He extends his arm and with his index finger, pulls on the trigger of an imaginary pistol. This is his way of illustrating what happened at a meeting that allegedly took place a week before the toppling of the Muslim Brotherhood and President Morsi. Sisi claims that Khairat El-Shater, a leading representative of the Muslim Brotherhood, performed this gesture at a crisis meeting between the two men in June 2013. He explains that this was Shater's way of reinforcing his verbal threat that Islamist fighters from Syria, Afghanistan and Libya could be summoned to defend the government.

In view of such horror scenarios, can anyone be left in any doubt that Egypt needs a field marshal to save it? The press reports that unfortunately, terrorists in Libyan exile were planning a new attack on Egypt. "They have bases in 70 countries, including Europe," explains Sisi.

At a later point in the interview, Sisi reveals the pose that he feels suits him best. He confides in the audience that he has seen himself in a dream holding a sabre. He also says that restricting the right to demonstrate is the correct thing to do, adding that demonstrations lead to chaos. 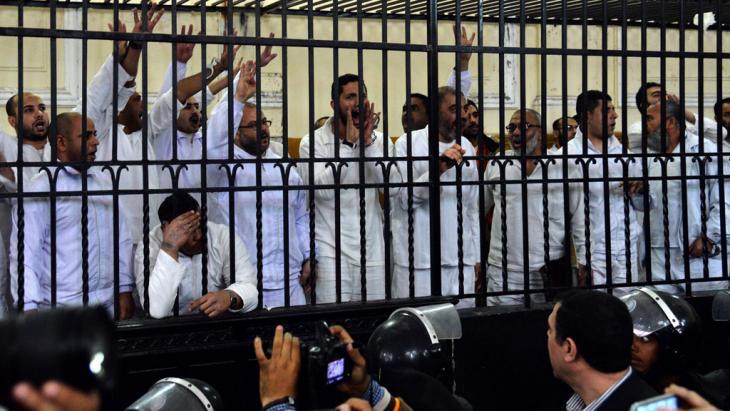 A city out of control

On Tahrir Square, where mass protests against the Mubarak regime first began in January 2011, diggers have churned up the asphalt over a large area. Pipes are being laid and there is so much work in progress on the square that public access is not possible. It could very well be the only official building project taking place in Cairo at the moment.

Not that there isn't any other construction going on in Egypt. New residential buildings for rental are springing up in the narrow gaps between existing residential blocks and on rooftops, sometimes just single rooms. This, however, is happening independently of the state, without any official planning. Two thirds of the population of Cairo – which is approaching 20 million – now live in informal housing. A well-known professor of urban planning has described Cairo as a city "out of control".

Quest for the new Egyptian citizen

But Sisi has no time for such matters. While he does concede that there are 12 million jobless in Egypt, he doesn't appear to have many ideas as far as economic and social policies are concerned – apart from an appeal for "everyone to get to work". The problems have "stacked up"; they cannot be solved "overnight" he warns. Now, he says, it is the job of schools, mosques and media to inspire "discipline" within society. They must all work together to forge the "new Egyptian". Sisi claims that he has already had declarations of loyalty from liberals and trade unionists, Nasserists and even Salafists.

Author Hamed Abdel Samad sees the Muslim Brotherhood as the embodiment of what he terms an "Islamist fascism". The Ukraine crisis has brought about massive overuse of the term "fascism" on the world stage. Nevertheless, "Mubarak reloaded" is not a fitting description of the situation in Egypt. In view of the imminent election of Abdul Fattah al-Sisi, it might be more accurate to warn against an Egyptian fascism.

They’ve already got the Louvre; they’ll soon have a Guggenheim Museum as well – and now the Emirates have added literature to their quest for cultural supremacy in the Arab world ... END_OF_DOCUMENT_TOKEN_TO_BE_REPLACED

Years in the making, Sisi's elite New Administrative Capital will isolate most Egyptians from their centres of government in an effort to fortify the regime against any social ... END_OF_DOCUMENT_TOKEN_TO_BE_REPLACED

Professor Timothy Brennan's "Places of Mind: A Life of Edward Said" is a detailed biography of one of the most important intellectuals of the twentieth century, taking us on a ... END_OF_DOCUMENT_TOKEN_TO_BE_REPLACED

China has long portrayed itself as a strong supporter of the Palestinian cause. It has also claimed that in sharp contrast to the stance of the USA, its position is based on ... END_OF_DOCUMENT_TOKEN_TO_BE_REPLACED

Recep Tayyip Erdogan, disappointed by the European Union’s reluctance to integrate Turkey into its ranks, has re-directed his country’s diplomacy toward the Maghreb and Africa to ... END_OF_DOCUMENT_TOKEN_TO_BE_REPLACED

Comments for this article: A nation marching in step

Since Morsi did not have the courage Salvator Allende had 40 years ago, Sissi will have an easier job than Augusto Pinochet.

END_OF_DOCUMENT_TOKEN_TO_BE_REPLACED
Social media
and networks
Subscribe to our
newsletter