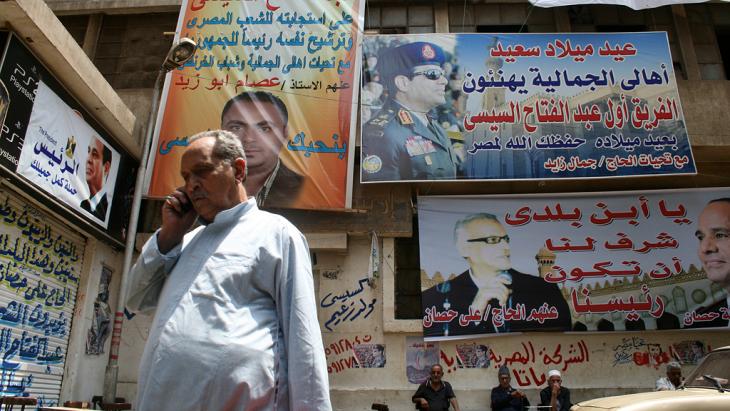 In the heartland of the al-Sisi cult

The residents of Gamaliya in Cairo are extremely proud of their district's son, Abdul Fattah al-Sisi. Markus Symank visited the quarter where the former Egyptian army chief spent his formative years to get a feel for the man who is most likely to be Egypt's next head of state

Even though Abdul Fattah al-Sisi, Egypt's former military chief and the likely winner of the upcoming presidential election, moved out of the labyrinthine historical quarter of Gamaliya a long time ago, his image is everywhere. Posters of him in a suit or in an army uniform hang on every second house front in this part of Cairo. They decorate the entrances to centuries-old mosques as well as the windows of corner shops and souvenir shops in the side streets.

"I love al-Sisi because he's a son of my neighbourhood," says the owner of a small shop. The speakers in his shop blare out "Teslam el Ayadi", which praises the army and is the unofficial  theme song to al-Sisi's election campaign. "And he has also freed our country from terrorists and extremists. With God's help he will continue to protect us."

A few streets away Atef El Zaabalawi sits in a café that is being used as campaign office. He tells anecdotes from al-Sisi's childhood. El Zaabalawi was born in the same year as the popular presidential candidate. Now, he is an organiser for "Kamel Gamilek", a group of volunteers who work for al-Sisi at grass roots level.

In the Gamaliya district, the al-Sisi family is known for its discipline, zeal and resulting wealth. "As kids, when we were playing soccer in the streets, al-Sisi watched us from inside the house, he never played with us," says El Zaabalawi. "That was their style. They were totally focused on school and work." The 60-year old is convinced that if al-Sisi wins he will apply the same diligence to solving the country's problems. 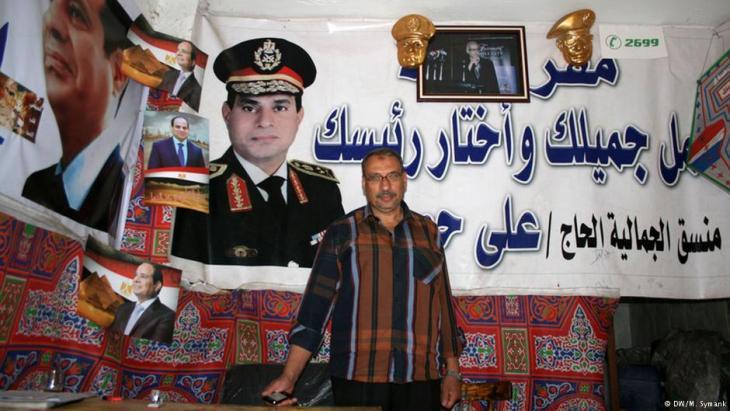 Idolisation of al-Sisi, conspiracies and defamation of the activists of the 25 January revolution are part for the course in Egypt these days. Pictured here: campaigner Atef El Zaabalawi in a temporary campaign office for al-Sisi in Gamaliya

According to Zaabawali, a second characteristic of the family was piety: "Every Friday, al-Sisi went to the mosque to listen to the sermons of the scholar Metwalli El Shaarawi." In a recent TV interview, al-Sisi confirmed that the conservative preacher had significantly influenced his world view. Al-Sisi likes to pepper his speeches with quotes from the Koran and brief prayers, two things that appeal to conservative voters.

The inconspicuous apartment block where al-Sisi spent a large part of his childhood is just a stone's throw away from the café where they are now campaigning for him. Apart from one single poster on a balcony, there are little references to the presidential candidate.

A few cats rummage through the trash for food on the dusty path leading to the apartment block; an old man slowly rides by on his donkey. The al-Sisi family moved out years ago when their son began his career at the military academy. Only a few relatives still live here. They don't want to talk about the presidential candidate. They are tired of the media hype and fear for their safety, they explain.

This hasn't harmed al-Sisi's popularity in the area. A vendor who works in the Khan El Khalili tourist bazaar close by says that al-Sisi has given Egypt new pride by removing Islamist President Mohammed Morsi. He hasn't had any foreign customers in months, but he is convinced that with a military man as the new head of state the tourists will come back.

"There is no alternative to military rule. They have the right perspective. What has Morsi, a civilian, achieved? Nothing." 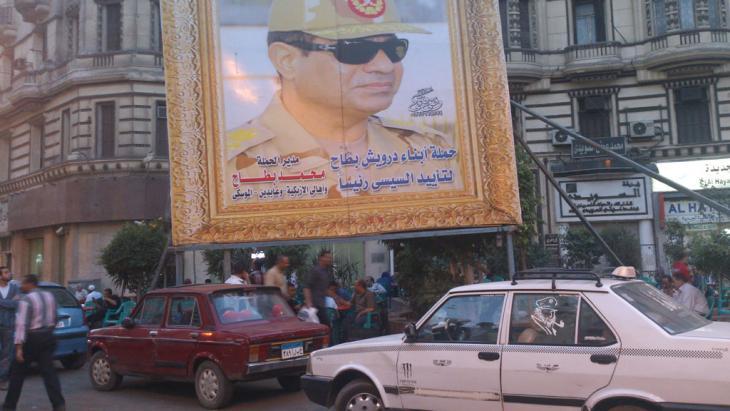 One-horse race: Abdul Fattah al-Sisi is considered the clear favourite in the upcoming presidential elections. For many Egyptians, he symbolises stability and a tough line on the Islamists

A conspiracy, not a revolution

The election campaigner Atef El Zaabawali also praises al-Sisi as a bulwark against the Islamists. The army chief's only challenger in the election, the left-wing revolutionary Hamdin Sabbahi, is seen as lacking the necessary toughness. El Zaabawali reduces the manifold problems of the country to a lack of security. He is convinced that if security is restored, all the other problems will vanish: the economic crisis, the absence of tourists and the high unemployment.

He doesn't think much of the revolutionaries' demands for reforms, more transparency and anti-corruption measures. He claims that the uprising against Hosni Mubarak was controlled from abroad in co-operation with the Islamists. "Why did we have a revolution? Because the Muslim Brotherhood wanted it. The events of 25 January 2011 were a conspiracy against Egypt. The overthrow of Morsi last year was the real revolution," he says.

He is not bothered by the students who week after week protest against the prospect of a return to the old regime just a few hundred meters away in front of the Al-Azhar Mosque. Al-Sisi will soon put a stop to those protests, says El Zaabalawi darkly.

As the photo of Fairouz talking to French President Emmanuel Macron spread around the world, many asked if Arabs today had any contemporary stars of Fairouz's standing. In this ... END_OF_DOCUMENT_TOKEN_TO_BE_REPLACED

Saudi Arabia and its allies have agreed to set aside their differences with Qatar at a summit meeting of the Gulf Cooperation Council. The restoration of diplomatic relations ... END_OF_DOCUMENT_TOKEN_TO_BE_REPLACED

Many in the West equate Middle Eastern music with the folklore of "A Thousand and One Nights". Tayfun Guttstadt demonstrates just how erroneous this is END_OF_DOCUMENT_TOKEN_TO_BE_REPLACED

Ten years after the start of the Arabellion in North Africa and the Middle East, many view the movement as a failure. But rather than being over, it has now entered a more mature ... END_OF_DOCUMENT_TOKEN_TO_BE_REPLACED

END_OF_DOCUMENT_TOKEN_TO_BE_REPLACED
Social media
and networks
Subscribe to our
newsletter