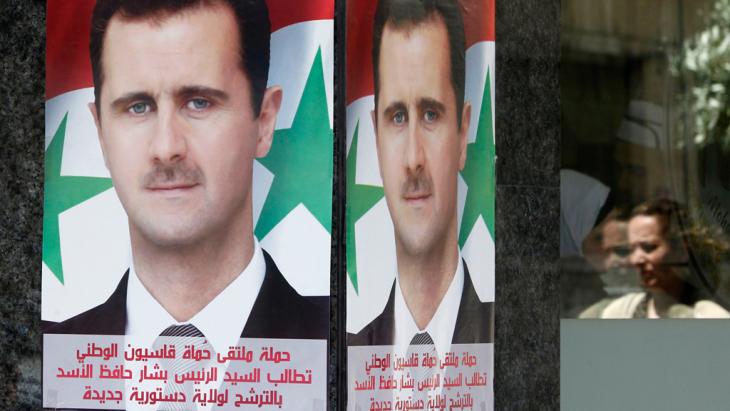 Syria's President Bashar al-Assad intends to have himself confirmed in office for a further seven years in early June. The regime's propaganda machinery is running flat out in advance of the election. Since the beginning of the revolution, the Syrian powers-that-be have been working hard to turn both domestic and international public opinion in their favour. By Martina Sabra

A friendly Bashar al-Assad smiles down from a larger-than-life billboard. Next to his picture is the word "sawa" (together). The president's campaign aims to put the Syrians in the mood for the so-called "election" on 3 June 2014 and at least another seven years under his rule.

The "sawa" campaign also includes a number of short videos. In one of them, two schoolchildren visit a cemetery on a sunny day and put flowers on a grave, smiling as happily as if "Uncle Bashar" had just given them a lollipop.

The pictures come across as tasteless and grotesque in view of the actual situation in Syria. Some five million Syrian children are displaced, three million do not attend school, and Unicef estimates that more than 12,000 have been killed in the conflict to date – most of them by weapons wielded by the regime. An unknown number of children, including very young individuals, are being held in the regime's dungeons and tortured in order to exert pressure on parents or relatives presumed to be opponents of the regime. 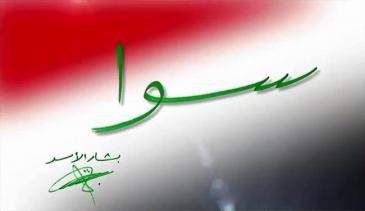 The absurd propaganda that is the "Sawa" campaign: it seems more than bizarre that the regime is claiming to stand for all Syrians in view of the fact that so many have been displaced, killed, tortured, injured and painted as "Islamist terrorists"

The videos and posters are designed to hammer home a message: the Assad regime's power apparatus is not to blame for death and destruction. No, Syria is the victim of a Western conspiracy, masterminded by the USA, Israel and the Gulf states. Some 160,000 dead, the destruction of almost the entire infrastructure, the disintegration of the country, the uprooting of half the population – all this is presented as self-defence by the heroic Syrian regime in its battle against ruthless imperialists.

This may seem absurd, yet the Syrian regime's strategy of turning facts on their head for propaganda purposes has been remarkably successful to date. Since March 2011, the regime has been referring to all resistance – including non-violent protest – as Islamist terrorism, Western conspiracy or both at the same time. The aim was to discredit the revolution in all directions, both abroad and in the eyes of the Syrians.

Various instruments have been used to control public opinion on the home front. These include forced "confessions": pseudo-admissions from Syrians or foreigners – usually wrongfully imprisoned – who are forced to "come out" as secret agents, saboteurs or terrorists in front of a camera.

A recent prominent example is the 23-year-old psychology student Maryam Haid from Damascus. According to friends and relatives, she was not politically active. Nevertheless, she was arrested during a raid on a cousin's home in Damascus in January 2014 and taken to an unknown location.

It was six weeks before Maryam Haid reappeared – on Syrian state television. Visibly under pressure, she and an alleged accomplice related their alleged "crimes" on the infamous programme "Ain Saahira" (Watchful Eye). They had distributed flyers and posters calling for democracy, the two of them said. They also claimed to have falsified video reports of peaceful demonstrations against the regime and sold them to anti-Syrian media abroad. 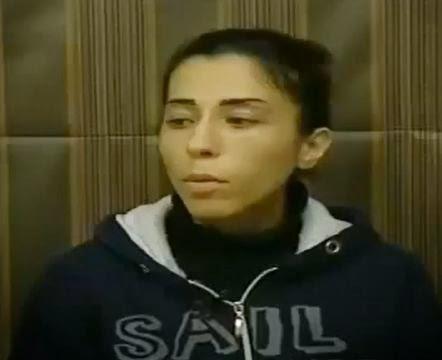 Caught up in Syria's propaganda and confession industry: 23-year-old psychology student Maryam Haid was arrested and taken to an unknown location. Six weeks later, she appeared on Syrian state television, "confessing" to a series of alleged "crimes" on the programme "Ain Saahira" (Watchful eye)

Maryam Haid has since been officially accused of forming a terrorist organisation. It is unclear when her court case will begin. She is still in prison. The Syrian social scientist Haid Haid, a brother of Maryam Haid currently living in Lebanon, has studied the role of fake confessions in the Syrian media. In a recently published essay, he describes how these televised public confessions and oaths of loyalty by alleged or actual criminals have been used as a propaganda instrument in Syria for years.

Since the beginning of the revolution in March 2011, he writes, these alleged "confessions" have, however, multiplied and evolved. "Many Syrians no longer believe the so-called confessions; they even make jokes about them. But there are still enough people who fall for the deception. And the regime has begun to write more modern screenplays. We can now speak of a confession industry," Haid Haid says in conversation with Qantara.de.

The digital traces of Assad's propaganda

The Assad regime also wants to control information about Syria outside the country itself. Since March 2011, the previously very limited possibilities for independent foreign journalists seeking to work in areas controlled by the regime have been almost entirely cut off. In parallel, there have been increased numbers of targeted attacks on media representatives and other parties abroad who sympathise with the Syrian revolution or report on the Assad regime's atrocities.

At least some of these attacks were perpetrated by the "Syrian Electronic Army" (SEA). In May 2011, Canadian IT experts issued the first warning about this group of computer specialists and hackers, whose digital traces led directly to the centre of power in Damascus. "Syria has become the first Arab country to host a public Internet army on its national networks, an army that openly launches cyber attacks on its enemies," writes the researcher Helmi Noman in a short study by the Canadian organisation Citizen Lab.

The SEA attacks three main targets: firstly, the Syrian opposition's Internet communications. Secondly, the websites of foreign institutions and media perceived as hostile to Assad – including Harvard University, the BBC, the Twitter accounts and blogs of the "Financial Times", and the Twitter account of America's leading news agency, AP. Thirdly, it floods (or spams) popular Facebook pages or comments sections in large newspapers with pro-Assad comments and postings. 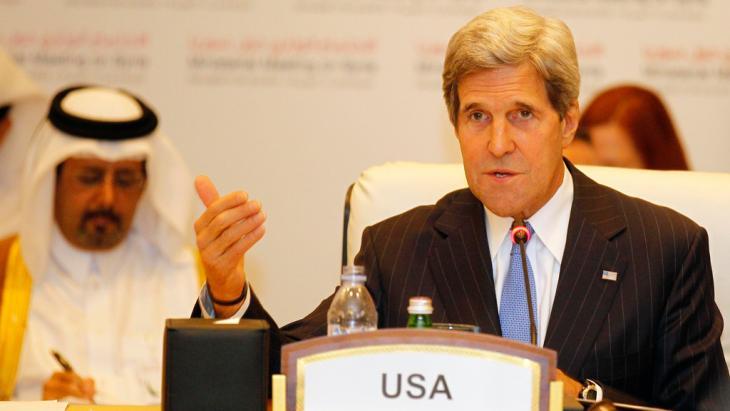 Representatives of the Friends of Syria Group have dismissed the presidential election in Syria in early June as a farce. US Secretary of State John Kerry recently said that the vote was an insult to the Syrian people

Bashar al-Assad has openly praised the SEA on a number of occasions. Experts suspect that the cyber army is also involved in tracking down rebels and regime opponents within Syria. The SEA is also assumed to be behind numerous virus and malware attacks on non-violent Syrian revolutionaries. IT experts found spyware installed on Syrian activists' computers inside and outside the country, used to send e-mails and passwords directly to an address in Syria. Employees of international aid organisations in Syria are also reported to have had their computers hacked.

Cyber battalions, forced confessions, propaganda videos, violence against independent reporters – there are no holds barred in Damascus when it comes to manipulating public opinion. The Assad regime is currently doing all it can to present itself as the lesser evil or the secular alternative.

Some Western media makers, experts and politicians would be happy to believe that it is – especially as the Syrian opposition is no stranger to propaganda either and it is becoming increasingly clear that many of Assad's opponents are not in favour of democracy. Yet the fact remains that the main responsibility for the emergence of the conflict, for the mass destruction and murder in Syria, lies with the Assad regime. On 3 June 2014, what's at stake in Syria is not "sawa", not jointly repairing the country, but whether the Assad clan will maintain its grip on power.

The disappearance of Razan Zeitouneh and her colleagues has been one of the greatest mysteries of the Syrian war – until today. DW's investigative unit hunted clues across six ... END_OF_DOCUMENT_TOKEN_TO_BE_REPLACED

How can the various realities of Kurdish life, shaped by depression, resistance and war, be depicted in art? This is the question addressed by the “bê welat – the unexpected ... END_OF_DOCUMENT_TOKEN_TO_BE_REPLACED

Millions of people in Syria's Idlib region depend on foreign aid that passes through only one border crossing. The UN mandate regulating passage through it will expire on 10 July ... END_OF_DOCUMENT_TOKEN_TO_BE_REPLACED

They’ve already got the Louvre; they’ll soon have a Guggenheim Museum as well – and now the Emirates have added literature to their quest for cultural supremacy in the Arab world ... END_OF_DOCUMENT_TOKEN_TO_BE_REPLACED

By stage-managing his re-election in a poll widely dismissed as a farce, Syria's President Bashar al-Assad has killed two birds with one stone: he has forced his compatriots to ... END_OF_DOCUMENT_TOKEN_TO_BE_REPLACED

END_OF_DOCUMENT_TOKEN_TO_BE_REPLACED
Social media
and networks
Subscribe to our
newsletter